A Raphoe play park is facing closure because the local community can no longer afford to fund it.

The popular playground was opened five years ago following a titanic fundraising effort within the town. A committee was established and an understanding reached that if they looked after and maintained the park for five years, Donegal County Council would then take over the running.

But with the five year period now elapsed the committee says it no longer has the money to maintain the play facility. And unless the local authority adopts it, the gates will have to close come February.

Committee member Jean Laird said, “The play park is a great community facility. You have children who might go to playschool together but then split up into the two primary schools. So you would see them meeting up in the playground. It’s that sort of community facility and it’s very well used.

“When we opened it we were told we would have to upkeep it for five years and we understood that. The upkeep is about €3,000 per year and to meet those costs we have held various fundraisers which have always been incredibly well supported by the local people, groups and businesses.

“But unfortunately we are at the stage now where our bank balance is nil and we just don’t have the money to cover maintenance or insurance,” Ms Laird said. 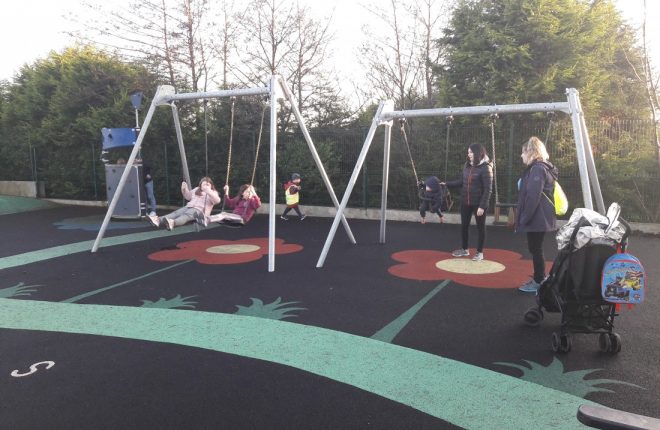 Youngsters making the most of the Raphoe playground facilities.

Raphoe councillor Frank McBrearty brought the issue before a meeting of Donegal County Council. He asked why the council was funding some play facilities but appeared reluctant to take over others.

“There is a clear, fundamental issue here of certain playgrounds having greater rights than others,” he said.

Councillor McBrearty went as far as to suggest that his fellow councillors cover the running costs out of the ‘members allowance’ they each receive annually.

“This is a cross community play park, one of the best things I have seen since I’ve come to council and it is ready to close. We were told that after five years it would be taken over. We are not even asking for that, all we are asking is for the insurance to be paid. I don’t think that is unreasonable.”

Council’s Director of Services Liam Ward said it was an issue that has surfaced in other parts of Donegal in recent times. He acknowledged the situation in Glenties where a play park was forced to close in October for similar reasons to Raphoe. It has since reopened following the intervention of a local businessman.

Mr Ward said there was a “willingness” on behalf of Donegal County Council to look at each case individually and on its merits.

“If necessary council will step in and assume responsibility for insurance and come to terms with the local group,” Liam Ward said.

But Jean Laird said council intervention will have to happen sooner rather than later because the play park in Raphoe is literally 12 weeks away from closure.

“We have contacted the council for an update but so far we have had no response,” Ms Laird said.

“Come February the park will have to close and if that happens I think the community will be devastated because there was so much hard work put in to get it up and running.”