Advertisement
HomeHeadlinesBallyness shellfish licences to be appealed
Advertisement
THE SAVE Ballyness Bay community action group will appeal the fourteen aquaculture licences granted by the Department of Agriculture and are ramping up fundraising in order to cover the costly appeals process.
Speaking to the Donegal News spokesperson, Caitlín Ní Bhroin confirmed that following a committee meeting the decision has been made to appeal the licences which has to be carried out within 28 days and includes the Christmas period. Almost €3,000 will be needed to cover the cost of appealing as it is €200 to appeal each licence.
The licences for the cultivation of Pacific oysters and clams using trays and trestles have been vehemently opposed by the group who have been campaigning to protect the bay which is a special area of conservation. More than 5,000 people signed a petition opposing the plans while a public meeting held in the area was attended by over 700 people voicing their concerns. At the latest committee meeting, held on Thursday night, the members voiced their anger and shock at the decision.
Ms Ní Bhroin said: “The anger in the community is palpable. There was a lot of shock and there is  anger as well because there was no public consultation. It is very costly for a community group or an individual to appeal. Fundraising is a growing concern because of the bill we will be incurring. Every application has to be gone through. There is a lot of work involved.”
At the meeting individuals also expressed their interest in submitting their own appeals and the cost involved and how to do it was explained to them. The group’s legal team has also been briefed on the latest developments and Ms Ní Bhroin said there is a lot of work going on behind the scenes. 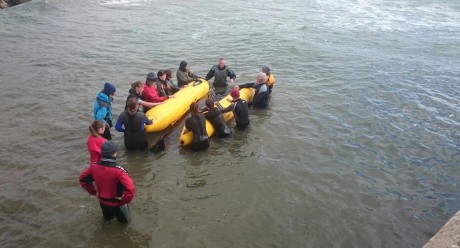