A Tyrone businessman is creating jobs in West Donegal through the expansion of his bacon company.

The Donegal branch of Kennedy Bacon will begin operating in Magheraroarty in the coming weeks with five jobs being created initially.

“We have six people employed in Omagh and we are hoping for something similar in Donegal,” Mervyn Kennedy said.

“I lived in Dunfanaghy for 15 years and my father William was from Kilmacrennan so I’ve always had a fondness for Donegal.”

The expansion has been made possible through support from Údarás na Gaeltachta who Mr Kennedy says have been hugely supportive of him.

He said by utilising west Donegal’s network of haulage firms, he intends to try and break into the Dublin market and attract business from some of Ireland’s most prominent pizza companies.

“In this part of the county you have a few haulage businesses with good links to Dublin. People have asked me why I’m opening way out here but you a network of haulage companies that cover the whole of Ireland.”

Despite the Donegal branch of Kennedy Bacon not yet being in operation, Mervyn Kennedy revealed that he has already had enquiries from potential employees looking for work.

Kennedy Bacon has won a string of awards for its bacon and pork products including UK Great Taste Awards and Blas na hEireann, the Irish National Food Awards. Its owner added that he hopes his quality produce will keep him ahead of the market and enable him to expand his company further. 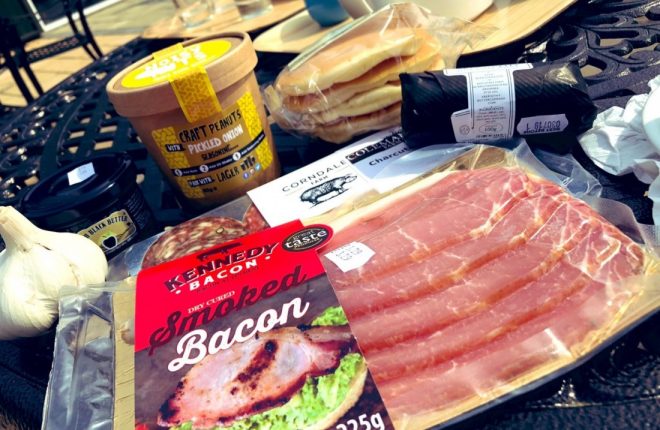 Some of the Kennedy Bacon products which will soon be manufactured in West Donegal.

“In and around home we have been working with a few pizza producers to get their feedback and to try and get them the product they want. All our produce is from Irish farms and it is our intention to continue doing that. A lot of the bacon out there is imported but one of our main aims is to make sure our produce comes off Irish farms.”

A spokesperson for Údarás na Gaeltachta said it continued to support small and medium sized enterprises in developing and establishing new markets and opportunities in light of the uncertainty around Brexit.

“Kennedy Bacon, with the assistance of a support package approved by the Board of Údarás na Gaeltachta last year, have established a bacon production facility in Údarás na Gaeltachta’s Food Innovation Hub in Machaire Rabhartaigh in the Donegal Gaeltacht and will create five jobs in the facility over the next number of years.”

Údarás added that in light of uncertainty around Brexit, more and more companies were coming forward to seek advice on setting up in rural Donegal.

“The broad range of tailored supports and business premises available from Údarás na Gaeltachta, along with the significant opportunities being provided by the growing GTEIC digital hub network, have led to increased business queries from both sides of the border in recent months looking to establish and develop new markets,” they added.