IRELAND’S love affair with Down Under may be on the wane but for some Australia continues to be the land of opportunity.

Firmly in that category is Donegal man James Anthony O’Donnell.

The 34-year-old traded Manorcunningham for Perth in 2011 – at the second time of asking – and has carved himself out a career that recently saw him nominated for an Irish Australian Chamber of Commerce Business award.

James was one of hundreds of thousands of young people who left Ireland in the early part of the decade in search of a better life. According to the Central Statistics Office Australia’s magnetism peaked in 2012 when 18,200 working visas were issued to Irish citizens.

But that trend has reversed. For many who made the long journey the bright lights of Melbourne, Sydney, Perth and Brisbane have dimmed and the desire to be close to family and in familiar surroundings has won out. Last year just 4,500 Irish people made their way Down Under.

James can testify to the turn in the tide. As he puts it, every week there used to be a party to welcome someone from Ireland. These days it is all leaving parties.

But the Australian dream is not completely dead, at least not for some who have kept their heads down, worked hard and who are reaping the rewards.

“I came out in 2009 for six months mainly because all my friends were here,” said James.

“I thought I would come out and see how I got on but nothing really happened. When you come from a big family like I do, homesickness is a big thing and being so far away from home, I didn’t really enjoy myself.” 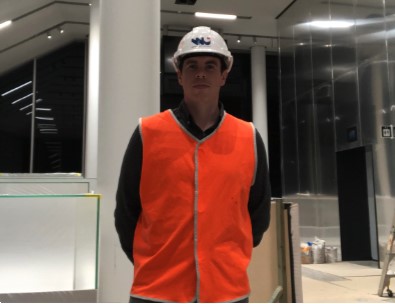 James on site at one of the projects he is involved with. The 34-year-old is employed by Wood & Grieve Engineers and was recently promoted to the role of Fire Project Officer. He is currently completing The New Museum for Western Australia, one of the most significant museum redevelopments in the country.

Despite struggling, James did complete his ‘regional work’, a period of labour for anyone wanting to extend their visa by 12 months. Unsuprisingly given his agricultural background, he spent the required three month period working on a potato farm 350 kilometres south of Perth. But after six months he decided to return home.

Prior to leaving Donegal the former Drumoghill National School and Errigal College student had been working as an architectural technician in Creeslough. In his absence the post had been filled and instead he found work in Centra at Letterkenny’s Mountain Top.

“Everyone was coming to Australia at that time and a lot of my friends were still here. I wasn’t making a great career back home so I decided to give it another try. I had nothing to lose.”

He touched down in Melbourne in 2011 and fell in with an old pal, Jason Doherty from Newtowncunningham. Over a few pints the pair decided to pack their bags and go travelling along Australia’s east coast. They spent a month on the road before arriving in Brisbane. There James got a call about a job opportunity in Perth with the multi-national engineering firm AECOM.

Having graduated from LYIT with a degree in building systems, the post was the perfect fit. After successfully navigating the interview, he took the job. But settling down was still proving to be difficult.

“That first year or two years was tough mentally. Being away from family and close friends, it wasn’t easy. But the good thing was that there were so many people from Donegal here at that time. A crowd of us used to meet up on a Saturday and you would have had maybe 20 people from Letterkenny alone. That made you feel at home and being so far from Donegal, your friends became your family and that made a big difference.”

The Aussie adventure suffered a body blow though when in late 2012 AECOM lost a number of major contracts and had to let several staff go.

“I was one of the first ten and it was a setback but it also made me realise that I wanted to be here.”

By this stage James had branched out into designing fire and life safety systems and potentially life-saving equipment within commercial buildings. He quickly found work with another company, BCA Consultants, before moving on to Wood & Grieve Engineers, now part of the global Stantec group.

In December 2017 Wood & Grieve promoted him to the role of Fire Project Engineer, managing projects ranging from small tenancy designs to the larger new commercial buildings he is involved in at present. Having worked on the state-of-the-art underground Perth Busport which opened in 2016, James is currently completing The New Museum for Western Australia, one of the most significant museum redevelopments in the country.

Last month his hard work brought him on the radar of the Irish Australian Chamber of Commerce. He was among the shortlist in the Young Professionals category for their annual business awards in Sydney, having been nominated by a senior colleague. 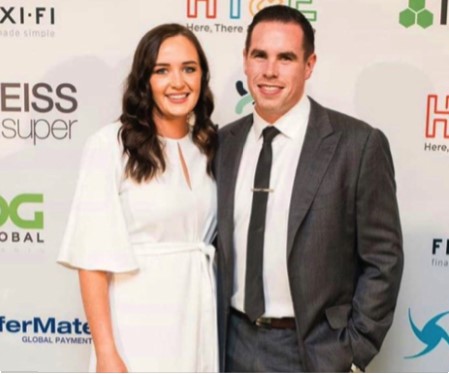 James and his partner, Ciara Smith-Duff, at the prestigious Irish Australian Chamber of Commerce awards bash.

“I didn’t believe him at first but then I got a call from the Chamber asking me to submit my documents as part of the nomination. I was like ‘what the hell’ and I genuinely thought it was a joke. But I submitted my documents and that got me down from the 40 nominations to the final ten.”

While he narrowly missed out on the top prize, being nominated and amongst some outstanding calibre was enough.

“I was proud of making it to the final. I didn’t make it to the top prize but it is still something I will look back on with pride. We all want to do and achieve things to make our family and parents proud.”

James is one of the success stories to come from Ireland’s latest wave of emigration. Tens of thousands have flowed through Australia’s airports in the past decade – first through the arrivals lounge and then the departure gate. James has held his own and continues to make his mark.

The reality is though that if the work was available in Donegal, he would be home with parents James and Kathleen and his five sisters and brother, wielding his talents with an Irish firm.

“When I came out in 2011 I said it was for a year. I said in 2015 I would like to go home, I thought it again in 2017. But you read so many stories through social media of how difficult it is for returning emigrants to integrate back into Irish society. Reading these stories make you question a return.

“I would like to think I would go home in the morning if I had the opportunity there, but it’s a huge decision. In terms of my career path, the experience that I am gaining in Perth at the moment is something that home can’t match right now. I work on a variety of projects and Donegal just doesn’t seem have that many at the moment. It’s disappointing and it’s disheartening but that’s life. The long term plan however would be to eventually move back closer to home at least when the time and opportunity is right.” 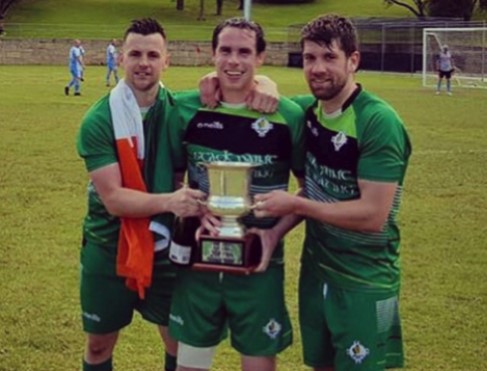 Letterkenny men Fergal Corry and Dean Creevy with James O’Donnell and the cup they won as part of Emerald FC football team.

James added, “A few years ago everyone in Ireland seemed to be going to Australia. But I think it’s gone. We were always going to welcoming parties but these days it’s more leaving parties.

“Everyone grows up in Ireland watching Home and Away and Neighbours where they go to the beach everyday. You can do that but it’s not all it’s made out to be either. You still have to go to work and do all the day-to-day stuff.

“It’s still a great place to be and as long as it keeps providing good opportunities and I’m enjoying myself I’ll stay. But at the end of the day home will always be Donegal.”