THE co-ordinator of the Riverine Project says it has the potential to be a “very magical place”.

Claire McCallan outlined details of what the €9 million scheme could look like to a meeting in Lifford on Tuesday. The Donegal County Council official used the gathering primarily to thank the public for its help in getting the project over the line. Following years of false dawns the Special EU Programmes Body (SEUPB) confirmed in June that it was committing €8.96 million to the project. A community ‘Rise of the Riverine’ fun day held last May, when 1,500 people from both Lifford and Strabane walked to the border, is thought to have been pivotal in securing the multi-million euro package.

A provisional start date for construction has been earmarked for September 2021 and under the terms of the financial agreement with SEUPB, the budget has to be spent by March 2023. Three posts linked to the project have been advertised – one for a project manager, one for a project officer and finally a community animator.

Ms McCallan revealed that Donegal County Council and Derry and Strabane District Council have already engaged with schools, farmers, church groups, women’s groups and others in a bid to get a flavour of what the community wants.

She said the €9 million will be used to create “exciting” physical, social and community links along the border between Lifford and Strabane.

“There is a calendar of events that we have put together that has the potential to allow Riverine to be a very magical place,” Ms McCallan said.

Outlining what the Riverine might eventually look like she said it will include a pedestrian bridge, believed to be the first trans-jurisdictional structure of its kind in Ireland. On both sides of the bridge will be a green area, one with a pavilion building. Town parks and water activities will be two of the main focuses as plans progress, Ms McCallan said.

Among those drawn in to help shape the Riverine has been Rev David Latimer, the Derry Presbyterian Minister who became one of Martin McGuinness’s closest friends. He said through his outreach work in schools he hopes to encourage more young people to play a role in shaping the Riverine Project. 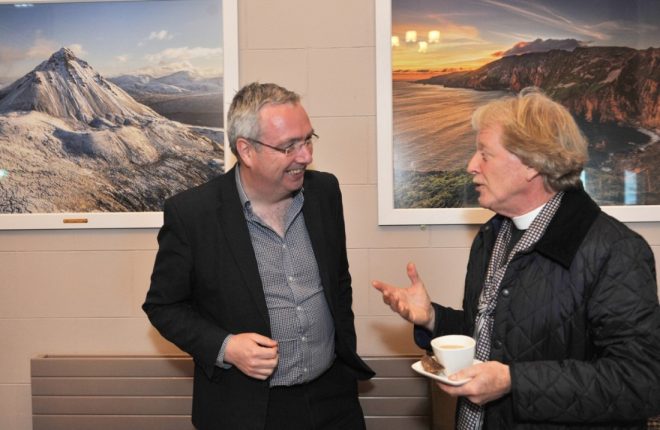 One of the ideas he has come up with is a ‘Peace Message Tree’ similar to the one about to be unveiled at Derry’s Ebrington site. The galvanised metal tree will incorporate 409 metal oak leaves, each embossed with a peace pledge penned by schoolchildren from across Northern Ireland and the border counties.

Ms McCallan said it was just one idea of many that have been put forward as the Riverine begins to unfold.

Asked if the Riverine money could be at risk because of Brexit, Ms McCallan said that assurances have been given that it will not. Neither will the scheme be impacted by the A5. The road will run alongside some elements of it but the impact will be minimal.