HUNDREDS of thousands of wild fish are being “sacrificed” to keep Donegal’s salmon farms in business.

That is according to campaign group Galway Bay Against Salmon Cages after figures revealed how, since 2015, over one million wrasse have been taken from bays around Donegal and moved to factories owned by Mowi, formerly Marine Harvest. The fish are used to clean the lice from farmed salmon.

Galway Bay Against Salmon Cages is warning that if the practice continues, wild wrasse could disappear from Irish waters altogether which in turn would lead to an imbalance in the marine environment.

“The absence of wild wrasse in bays may result in stress and disease in other large species of fish which rely on wrasse to keep them clean of parasites,” said the campaign organisation’s chairman Billy Smyth.

Bright in colour, wrasse are commonly found off Donegal’s coast. And while edible, they are not commonly found on restaurant menus. But according to documents supplied by the Marine Institute, another use for them has been found.

Figures show that in the past four years tonnes of wild wrasse have been moved to salmon farms in Donegal, all of them owned by Mowi.
Of the wrasse captured, more than half million have been taken from Mulroy Bay, over 400,000 from Inver Bay, 13,600 from Lough Swilly and 7,960 from Millstone Bay. Thousands more have been moved to Mowi fish farms in Galway and other parts of the country.

Galway Bay Against Salmon Cages (GBASC) says it has grave concerns over what happens the wrasse after they have been used to clean the lice from farmed salmon. And its chairman is warning that if the government continues to issue salmon farming licences, it could lead to an all-out collapse in Irish wrasse stocks.

So concerned by the harm being caused to the breed, Catherine Connolly TD recently raised the issue with Minister for Agriculture, Food and the Marine, Michael Creed, in the Dáil.

Mr Creed confirmed that Irish salmon farmers are using so-called ‘cleaner fish’ to get rid of sea lice on farmed salmon. The minister also confirmed that Mowi is one of the main practitioners of the process.

Billy Smyth said, that without a change in policy, Ireland faces losing its wrasse stocks altogether.

“If more new salmon farm licences are granted in the future by the Irish government the use of wild wrasse will also increase and we may end up like Norway who are commercially taking out 22 million annually, causing a collapse in wild stocks.”

Galway Bay Against Salmon Cages says that recreational sea anglers, who normally release any wrasse they catch, also have concerns. Their fears centre on disease being spread by wrasse that do make it back into the wild population.

“A number of questions need to be answered by Department of Agriculture, Food and the Marine, Bord Iascaigh Mhara and the Marine Institute,” Billy Smyth added.

A spokesperson for Mowi said it uses many species of cleaner fish, including wrasse, which are supplied by local anglers.

The firm said it was an “ideal solution” to controlling parasitic lice and “an excellent method” of keeping its salmon stocks in good health and appealing to the commercial market. 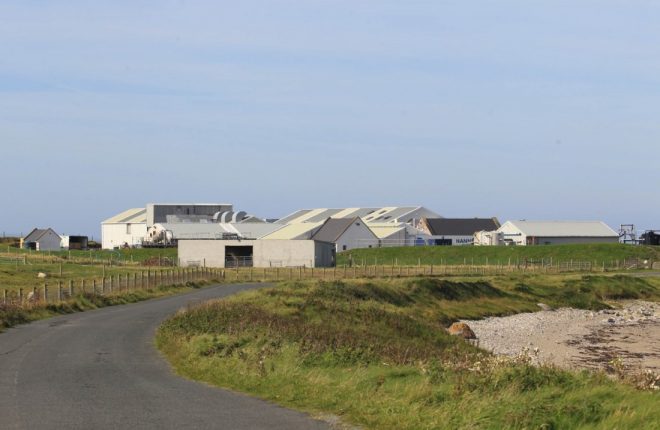 The Mowi fish farm near Fanad.

“This biological control mechanism has proven an excellent method of keeping stock in optimum health and ensuring that organic Irish salmon continues to be a highly-sought food commodity on Irish and international markets, thereby sustaining hundreds of jobs locally,” said Mowi.

“Mowi Ireland operates in accordance with the regulations governing such fish, their health-monitoring and their movements. Wild cleaner fish are supplied by local fishermen who benefit commercially from selling their stock to the company thereby forming part of the 800 approximate suppliers with whom Mowi spends more than €21 million annually.”

The company rejected claims that its use of wrasse could lead to a collapse in stock numbers.

“This hasn’t had any negative effect on these species of fish according to their population studies in terms of abundance, demography and size distributions as well as by rotating certain fishing areas and comparing fished and unfished zones,” said a company spokesperson.