Advertisement
HomeBreaking News40 people in Donegal diagnosed with severe lung disease
Advertisement
FORTY people in Donegal have been diagnosed with a rare and severe form of lung disease since a nationwide screening programme began 15 years ago.
Alpha – 1 Antitrypsin Deficiency is a genetic condition passed from parents and increases the risk of developing severe lung disease – but many do not know it.
It comes in many strains from moderate to severe and may result in serious lung and/or liver disease at any age.
Almost two years after losing her mum, Anna Cassidy, to the severe disease, Lorraine Doherty continues her campaign to raise awareness of the condition. Mrs Cassidy sadly passed away in November of 2017 following a battle with the severe form of the condition.
Mrs Doherty hosted a coffee morning last weekend in Donegal Town Methodist Hall to raise awareness of the condition and funds for Alpha-1 Foundation.
Those at the helm of the foundation say the prevalence of the condition in Donegal and across the country is  high.
Since starting the nationwide detection programme in 2004, 1,522 Donegal people have been tested for the condition in Letterkenny University Hospital, which is done by taking a sample of blood.  Forty people have been diagnosed with severe Alpha-1, while 250 have received a diagnosis of moderate Alpha-1. Last month, a child in the north of the county was diagnosed with the rare condition.
Nationally, 20,000 people have been tested, with 400 diagnosed with the severe form of the condition while 3,800 have the moderate form.
The condition is not curable but is treatable with a drug known as Respreeza and the foundation is trying to convince the government it is worth funding.
Speaking to the Donegal News, Dr Tomás Carroll, Chief Scientist with Alpha-1 Foundation, said testing for the condition over the last 15 years has revealed Donegal as a county where lot of people are affected by the condition.
“It is an area in Ireland where there seems to be higher rates of other genetic conditions such as Cystic Fibrosis and Multiple Sclerosis.
“An early diagnosis is really important as is the testing of certain groups of people. Medical guidelines state that all COPD patients should be checked for Alpha-1. If someone is diagnosed then people are highly motivated to stop smoking (or never start) and this means severe lung disease, and early death, can be avoided.”
Dr Carroll said the early and aggressive treatment of chest infections, the annual take-up of flu vaccination and the avoidance of smoking is recommended for anyone diagnosed with Alpha-1.
“There is a very good relationship between GPs in the county and respiratory nurses in LUH, who are very good at identifying patients who should be tested for the condition. Anyone with the condition COPD should be tested for Alpha 1.
“By virtue of Letterkenny hospital being very aware of the condition we  have diagnosed a lot of families with a member who has the condition.”
Dr Carroll said Alpha-1 Foundation has a letter which anyone with concerns can obtain from them to allow them to have a free blood test by their GP carried out.
“The sample of blood is sent to Beaumont Hospital in Dublin. We get funding HSE funding to provide this national screening programme for Alpha-1.”
A treatment for the condition, which allows people to receive essential protein they are born without, has been approved and funded in many European countries, however, it is not widely available in Ireland yet.
CEO of Alpha-1 Foundation, Geraldine Kelly said she would like to see Alpha-1 included in new-born screening.
“If a child is diagnosed, it means their parents are carriers and it pushes the conversation out to the wider family. If it is caught early, risk can be minimised.”
The Alpha-1 Foundation was invited by Letterkenny GP, Dr Ciaran Roarty to speak at the Donegal Clinical Society last October.
“That’s a really good example of GPs working together with the hospital. It doesn’t happen in any other county,” said Dr Carroll.
The annual Alpha-1 conference takes place on Friday, October 25 in Marino Institute of Education in Dublin.
For more information see www.alpha1.ie, e-mail alpha1@crsi.ie or find them on Facebook and Twitter. 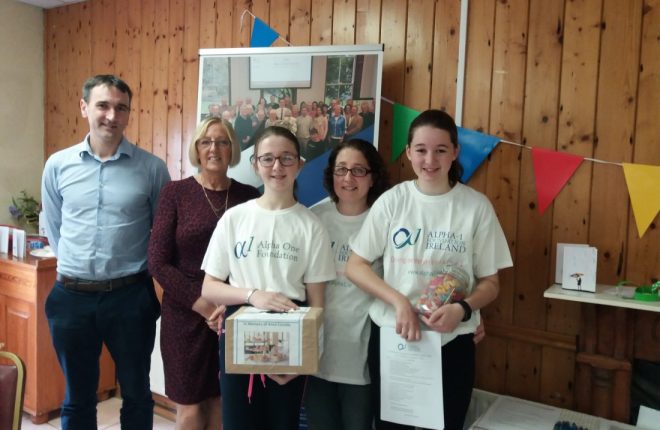