A charity that provides food to the poorest parts of the world has been given 1,560 reasons to smile by a kind-hearted Letterkenny schoolboy.

James Curran, son of Seamus and Sharon Curran who run the Jaycee’s XL store on the Long Lane, began his fund-raising crusade last year after watching the BBC’s Children in Need.

He has now handed the €1,560 he collected over to Fr Eamonn Kelly.

The money will be donated to Mary’s Meals, a charity involved in the setting up of feeding programmes in some of the world’s most impoverished communities. The organisation estimates the money will feed 100 school-going children for an entire year.

James, who attends Gaelscoil Adhamháin, told the Donegal News, “I watched Children in Need and after it I decided to do something myself. So I got a water dispenser tub and I made a sign with Children in Need written on it and I put it out in the shop.

“I wanted to give the money to a charity but I didn’t know which one. Then as the time came closer I decided on Mary’s Meals,” the ten-year-old revealed. 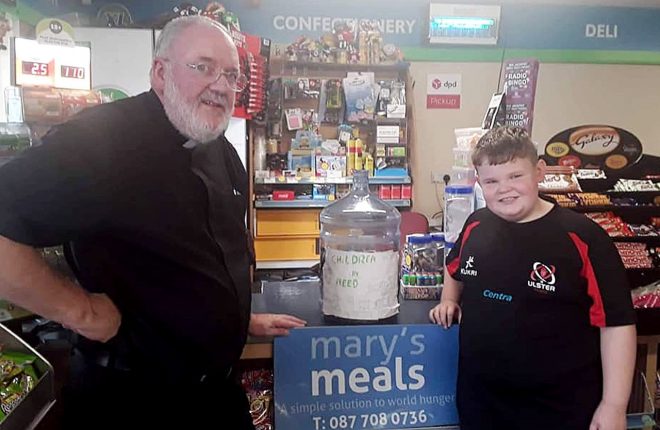 Dad Seamus said he was delighted that James had generated some positive headlines for an area that he says is often in the news for the wrong reasons.

“This is something James set up himself about a year ago but initially the container was at the back of the shop where not too many people could see it. Now and again you would have heard someone drop a couple of coins in so I decided to move it up to the front. From that more and more people started donating, particularly the young children who live around here which was lovely to see. They might have come in with 50 cents and have had 10 cents change but rather than buying another sweet, they would have dropped the coin in the tub.

“We have been here seven years and in that time we have seen the Long Lane get a lot of bad press. It’s nice to know that James has got people talking about the area for the right reasons.”

As for James and the fundraiser he started completely off his own bat, Seamus said he could not be prouder.

“We are very proud of him. James is our only child and he wants for nothing, within reason obviously, but he does give a lot to other children.
“He’s a quiet young fella and he is very kind hearted. This was all his own idea, I never got involved at all, and the fact that he wanted to do something like this for charity, we are very proud.”