A Donegal man who had a stroke at the age of 43 is urging people to open up about their health worries.

Shaun Wilson is a volunteer with the recently established ‘Different Strokes For Different Folks’, an organisation helping people along the road to recovery.

The father-of-two from Fahan suffered a stroke in 2016 following years of debilitating seizures.

“I had been having seizures from the age of 16 due to a cyst in my brain,” said Shaun.

“In 2001 it was decided that I should undergo surgery to try and remove it. At the time they believed the cyst was the size of pea but when they opened me up, they found it was actually the size of a small orange.

“They managed to remove part of it which left me seizure-free for ten months.”

The illness returned however and Shaun was placed on several different medications. With all avenues of medicinal treatment exhausted however, it was decided in 2015 that a further attempt to remove the cyst was the only option.

“It had got to the stage where there was nothing else left to do. The seizures were becoming more frequent and they were getting worse and lasting longer,” said Shaun.

The Fahan did all he could to hold on to his job at Letterkenny’s One Stop Motor Shop. The seizures though were gradually taking over his life.

“It just drains your system and takes so much out of you. You could sleep for hours afterwards,” he said.

Following months of preparation, he went under the knife for a second time on September 8 2016 at Beaumont Hospital in Dublin. Ahead of the operation he was warned that there was a very small chance he could suffer a stroke.

“I asked how high the risk was and was told two per-cent. It was that low that I forgot about it and just signed the papers.”

Shaun was awake throughout the procedure so that surgeons could pinpoint exactly which part of his brain impacted his speech, an area they intended to steer well away from. As he put it, “You know then that it is far from straightforward what they are doing”.

Towards the end of the surgery Shaun began feeling what he described as a “fuzziness” in his head. It was decided that he should be put to sleep immediately.

“I woke up in the recovery room four hours later. I still didn’t realise what had happened but when I looked down, I couldn’t see my right foot. I tried to move the bed covers and it was only then that I realised I had no power at all down my right hand side.” 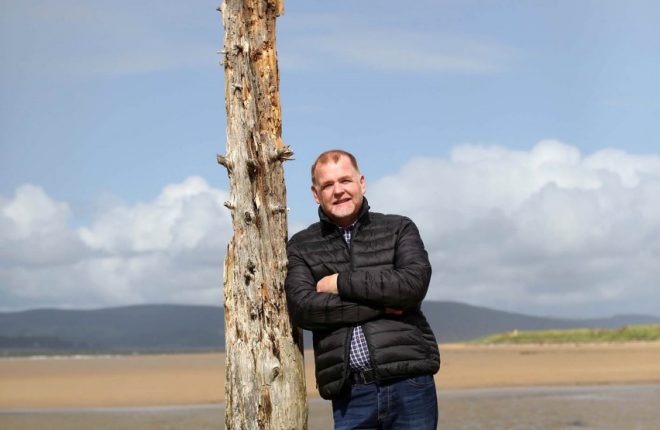 Shaun is smiling again after his terrifying ordeal.

At the age of 43, Shaun Wilson had suffered a fairly major stroke. This was explained to his wife, Doreen, first who then relayed the news to him. While it took time to come to terms with the revelation, he was able to take heart from the fact that the operation on his brain had been a success.

After digesting his situation, Shaun was transferred to St Conal’s Hospital to begin physiotherapy.

“All the muscles in my right leg were gone. It was literally half the size of my left leg,” he said.

He spent five weeks in St Conal’s, after which he was able to walk with the aid of a zimmerframe. Simple things like walking from the bed to the bathroom remained a serious chore however.

Then out of the blue he received a call from the National Rehabilitation Hospital in Dún Laoghaire offering him a bed. Despite being on the journey towards recovery, he decided to accept. He ended up spending 12 weeks in the unit until two weeks before Christmas 2016 when he was able to go home.

“I was on a stick which made things a lot easier and I was so glad to get home. I was thinking to myself that I should count myself very lucky and that there is always someone worse off. I sort of felt guilty about thinking like that but you have to hold on to what you have and just focus on your own situation.”

A return to work looked a million miles away and Shaun was told to expect to be off for at least two years. In defiance of all predictions though, he began studying again last September and has since secured employment with Desmond Motors in Derry.

Incredibly he has been completely seizure-free for three years.

“I don’t remember a time in my life without seizures. It’s a different life now,” he said.

Aside from looking after his wife Doreen and their sons Ryan and Oran and continuing on the path back to good health, Shaun is now on a mission to raise awareness of the increase in strokes, particularly among younger people.

“I am lucky that things turned out the way they did because it could have been a lot worse,” he said.

“When I came home Larry Masterson of Different Strokes For Different Folks contacted me and asked me to come on board with him. That is what I have been doing, posting different bits and pieces for them on social media. The feedback has been brilliant and it is great when someone asks you a question and you are able to tell them something about it. It helps them but it helps you too.

“I just want to let people know that a stroke can happen to anyone and no two people are the same. People can have a stroke for various reasons and my advice is always that if you feel something is not right then get yourself checked. It changed my life and when it happens, there is very little you can do.”