A painting by Letterkenny artist Philip Mackey has been chosen as part of the Royal Ulster Academy’s annual exhibition.

Regarded as one of the finest displays of art in Ireland, this year’s competition attracted upwards of 1,300 submissions.
Made up of paintings, sculptures, drawings and other forms of artwork, the submissions were whittled down by a panel of judges.

The 350 chosen pieces will go on display at the Ulster Museum in Belfast from October 18 until January 5.

Something of a veteran of the exhibition, Philip Mackey’s work has been chosen every year bar one since he first entered the prestigious contest in 2009. This year he submitted two works and it was his water colour painting of Brian Friel, the playwright who passed away in 2015, that caught the eye of the judges.

Revealing why he chose Friel for his entry, Philip said, “I’ve previously done a portrait of Brian using oils which now hangs in An Grianan Theatre and I’ve always wanted to revisit him because I’m fascinated by his face and the persona I see in his face. 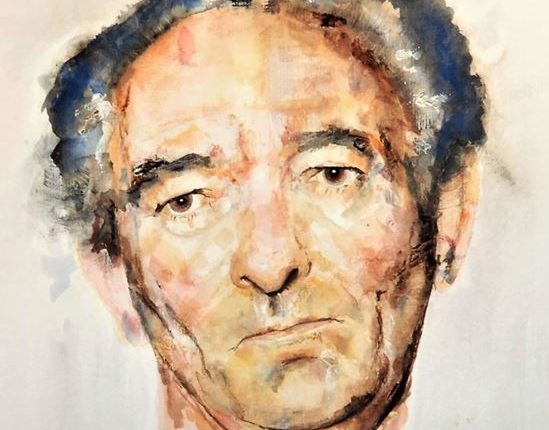 Brian Friel as captured in watercolour by Philip Mackey.

“I came across a photo of him in his younger days and I found it really powerful because he seems really physically fit, at the height of his talents almost. I decided that I wanted to capture that but rather than oils I went for water colour.”

Philip says he took his time over several days painting the celebrated writer rather than put himself under pressure.

“I wanted to give it a different effect rather than just the straightforward image so I layered on the paint, as you can do with water colour, and thankfully it came out just as I wanted it. The slight tilt in the head, the high cheekbones, just the power of the man Brian Friel was, these are the things that attracted me to the piece in the first place.”

As part of the 2019 exhibition, Philip has been invited to Belfast to give a talk on his portrait and the thinking behind it.