RESIDENTS in Castlefinn say they will blockade a new anaerobic digestion plant if they are subjected to the same problems that gripped Inishowen recently.

Over 150 people gathered in Doneyloop on Thursday night to confront Glenmore Estate over its building of a digester in the townland of Cavanaweary.

In July residents in the Burt area revealed how they were unable to leave their homes due to a stench emanating from a farm owned by the company which headed by businessman Karol McElhinney.

It was an issue that surfaced on several occasions during Thursday night’s fiery encounter.

Castlefinn residents revealed they were unaware the plant was to be built close to their homes until diggers moved on site. It emerged at Thursday’s meeting that a planning application for the development was lodged back in 2008 under the company name Recycle Products Ltd. Permission was granted for a plant with the capacity to deal with 14,500 tonnes of waste per year. It is expected to be fully operational before Christmas.

There were exchanges between residents and Pauric Teague and Colin Staunton of Glenmore Estate over what the anaerobic digester will mean for Doneyloop and the wider Castlefinn area.

Mr Staunton said that unlike the controversial biogas plant in Ballybofey, the Doneyloop operation will only receive liquid waste drawn from feedstocks and dairy, fruit and vegetable processors. It will not take in solid matter. The process itself, the consultant added, will be carried out within a sealed system which will prevent unpleasant odours from escaping into the atmosphere.

He was repeatedly challenged on that claim that the digester will be largely odourless, with one resident asking if he would be content to live beside it.

“If the farmers are mixing slurry on our farms it can stink for weeks,” said the audience member.

“Are you going to tell me that this does not smell? Will you live beside me?”

“No, my house is not around here,” said Colin Staunton.

“So you will be able to go to your home and leave us here to deal with this. Let me tell you, I know what it is like to live on a farm. It stinks,” the resident replied. 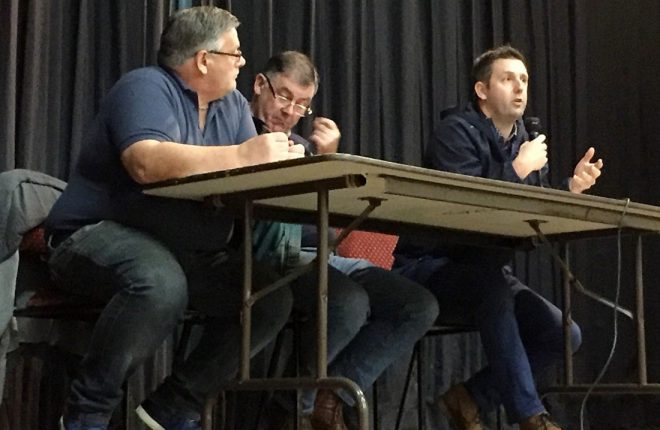 Colin Staunton far right) with Pauric Teague, both of Glenmore Estates. Closest to the camera is Eamon Lafferty who independently chaired the meeting.

The two Glenmore representatives did confirm that the slurry left over once the digestion process is complete will be spread on lands owned by the company. They assured however that it should smell no worse than normal farmyard slurry. They also revealed that Glenmore is working on the development of a pelleting plant which should eradicate odour problems altogether.

The recent problems experienced by residents in Inishowen were never far from the agenda however.

Colin Staunton said the problem in Burt was high nitrogen levels in the slurry. He pointed out that at the request of residents, operations had been suspended immediately once issues were raised.

Deputy principal of St Safan’s National School, Naomi McCormick, asked if the school community should have concerns given its proximity to the plant.

“This question was raised in Burt too,” Colin Staunton said.

Further fears were voiced over noise, traffic and the possibility of pollution from digestate leaking into a stream running alongside the plant.

Pauric Teague said the operation will lead to ten lorries per week travelling to and from the site at Cavanaweary.
In regard to pollution, it will be a sealed site with an embankment to prevent leakages to waterways. And in the event of a leak, Glenmore will be held to the same rigours of the law as any other polluter, he added. 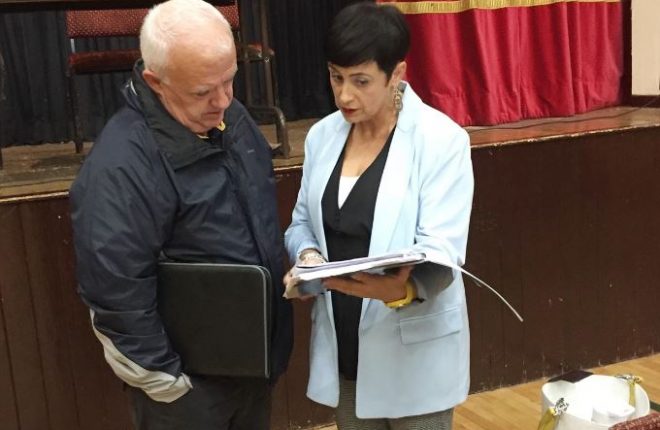 Jerome McConnell’s home is just over 200 metres from where the digester is being built. He said he had a number of concerns over what it will mean for him and his family.

“This is the same company that is spreading in Burt. So their track record is not good,” said Mr McConnell.

“I have two houses over there. What will happen their value once this goes up? This is a rural community but where we will be after this? God only knows,” Mr McConnell added.

Jerome McConnell vowed that if he is not satisfied with the operation once it is fully functional, he will block the gates and prevent access.

It was a threat echoed by Sinn Féin councillor and Castlefinn resident Gary Doherty.

Following two hours of discussion and debate it was agreed that a committee be established to liaise directly with Glenmore Estate.

Meeting organiser Anne Marie Carolan added, “We will become a very active committee here in Doneyloop and we will stand shoulder to shoulder with the people of Ballybofey and of Burt. And I just want to say, we are watching very closely what is going on.”