CLAD in leather, Elvis Presley raises a single eyebrow and announces in that low tenor voice, ‘Thank you Donegal, thank you very much’.

For members of the Elvis Rocking in the Hills of Donegal Fan Club, that is heaven right there.

Formed five years ago by Dungloe woman Beatrice Farrelly following a visit to Graceland, the fan forum has exploded in popularity. Today it has over 400 members and has raised over €20,000 for various charities.

On September 14 fans of The King will rock ‘n’ roll again, this time in aid of Bumbleance, the children’s national ambulance service. As well as celebrating the music and legacy of Elvis Presley, members will also raise a glass to club founder Beatrice to mark her 60th birthday.

Friday marked 42 years since Elvis’s untimely passing at the age of just 42. As thousands of people made the annual pilgrimage to Memphis for the anniversary, Beatrice Farrelly reveals how her fan club came about and why she is determined to keep Elvis rocking in the hills of Donegal. 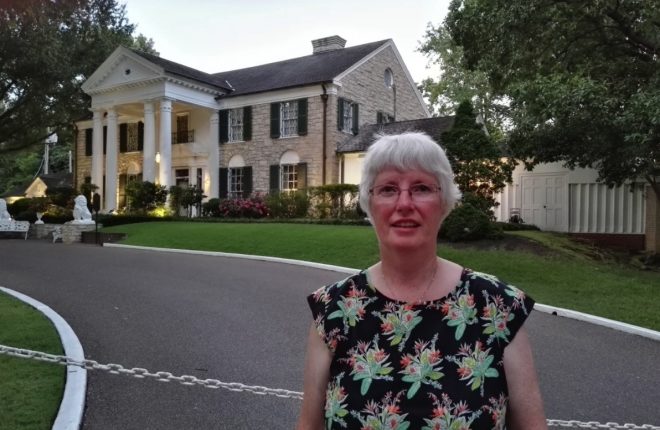 Beatrice Farrelly outside Graceland. Beatrice is the founder of Donegal Elvis fan club.

“I’ve loved him since I was a teenager and I used to listen to his songs on the radio all the time,” says the Dungloe woman.

Going to Memphis was a dream of mine for many years and it goes to show that sometimes dreams do come true.”

It was a trip to Memphis in 2007 that first laid the foundation for an Elvis fan club in Donegal. Travelling on her own but as part of a wider group with Drift Away Travel, Beatrice quickly fell in with like-minded people – those with a burning love for the man from Tupelo, Mississippi.

“All I wanted was to see Graceland. It never occurred to me that I might end up making friends and inviting them to Donegal. But that is what happened. They came from all over the place and when they saw how beautiful the county was, they said they wanted to come back. From that they started coming five or six times a year and we would all go to the local bar and the owner, Manus McDaid, would put on music for us.

“This went on for six years until a lovely man from Athlone, Gerry Mullins who was a huge Elvis fan, convinced me to set up a fan club. I said I would give it a go and I registered the club With Elvis Presley Enterprises in 2013. Sadly Gerry passed away that December, a month after we became an official club.”

In Gerry’s memory, the Donegal Elvis fan club held a fundraiser for the Irish Heart Foundation. Other charities to benefit from their goodwill include the Make a Wish Foundation as well as various organisations helping the disabled and those with special needs.

On September 14 Elvis will be brought back to life at Caisleain Oir Hotel, Annagry, in the form of tribute act Ciaran Houlihan.

“Elvis was such a charitable person himself and he gave away so much during his lifetime. That is why we hold these fundraisers and over the years we have raised just shy of €22,000,” says Beatrice. 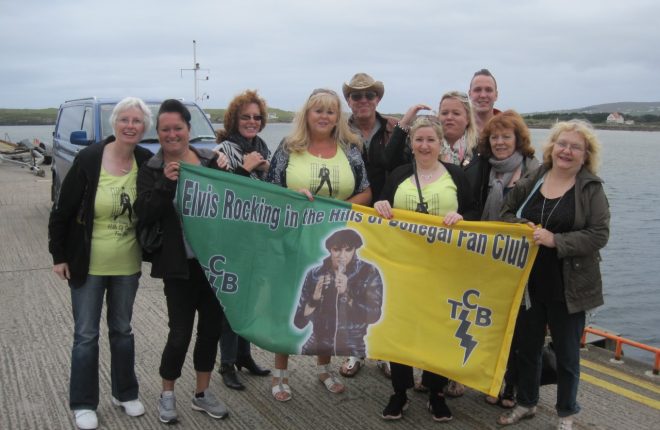 While undoubtedly a benevolent individual, it was not Elvis Presley’s altruism that had legions of women swooning wherever he played.
“He had the looks, the charisma and the voice,” laughs Beatrice.

“He left such a legacy behind him and as well as that, Elvis fans are some of the loveliest people you will ever meet. And he has brought so many people together. Because of Elvis, I have made so many friends and the tribute acts we have had have been guys from Germany, Malta, England, Scotland and Wales and they all put their heart and soul into it. Another big element of it for me is that the fan club brings people to Donegal. I love showing off our beautiful county and on top of that, the hotels, the bed and breakfasts and the local businesses get a turn out of it.”

With fans all over the world tuning into the Elvis Rocking in the Hills of Donegal Facebook page and more and more people subscribing to the fan club newsletter, it really is keeping Beatrice all shook up. But with four trips to Graceland under her belt and another somewhere on the horizon, she has no intention of returning to sender the letters, messages and emails she receives.

“I love doing what I do,” says Beatrice.

“It does take up a lot of time and it can be hard work but then on the nights we hold, when you see people coming and enjoying themselves and you know that money has been raised for charity, it’s wonderful.”

Tickets for the gig at the Caisleain Oir Hotel on September 14 are €15. Everyone is welcome and all details are available via the Facebook page.