A is for Anglo Celt: Donegal retained the Anglo Celt Cup in June with an excellent showing against Cavan in the Ulster Final. Declan Bonner’s team won by a scoreline of 1-24 to 2-16, and it was only the second time in the county’s history that they have won back-to-back Ulster titles. However, the sad passing of Manus Kelly earlier that day overshadowed the victory.

B is for Bolter: Oisin Gallen wasn’t even called into the Donegal panel at the start of the season but was brought in during the McKenna Cup to make up numbers, and really impressed. He went on to play a big part during the league, and was Donegal’s impact sub during the championship. The MacCumhaill’s forward only turned 19 last month, and has a big future ahead of him.

C is for Club run: For the first time, a Donegal club progressed to the semi-finals of the official All-Ireland Club series, and that meant Gaoth Dobhair were in action until the middle of February when they lost out to Corofin. It was the sixth round of the league before Daire Ó Baoill and Neil McGee featured in the green and gold, and Odhrán McFadden-Ferry had to wait until later in the season before getting his chance.

D is for December: Donegal’s season actually began back on December 30 2018 when they defeated Queen’s in the McKenna Cup in MacCumhaill Park. Declan Bonner’s team won on a scoreline of 0-21 to 0-11 with man-of-the-match Ciaran Thompson scoring four points.

E is for Experimental Rules: Five experimental rules were trialled during the McKenna Cup, with Declan Bonner labelling the one that permitted only three successive hand-passes as crazy. It was scrapped before the league, but the 20 metre kick-out, the mandatory forward sideline kick outside the 13m lines, the sin bin and the offensive/defensive mark inside the 45m lines were all in play during the spring.

F is for Frozen Pitch: The league encounter between Donegal and Meath really shouldn’t have gone ahead, as MacCumhaill Park was frozen in places on a bitterly cold night. However, the game was allowed to proceed and Donegal came good in the final quarter to win the match by 1-13 to 0-14.

G is for Gallagher: Donegal went toe-to-toe with Rory Gallagher again in the championship in Brewster Park. There were plenty of verbals on the sideline which could be heard from the stands, but Bonner’s team were too strong and won by 0-15 to 0-9. 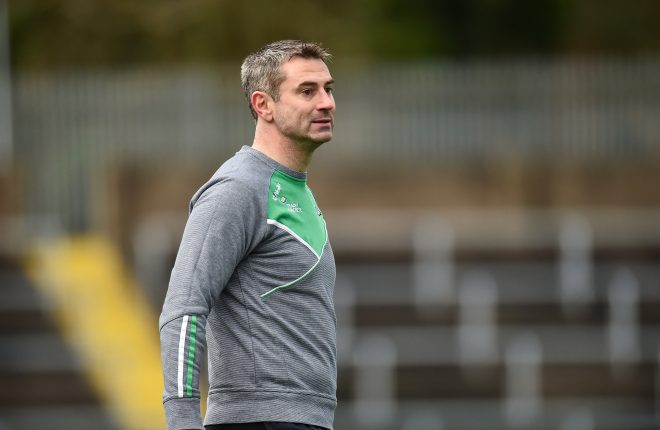 H is for Hogan Stand steps: For the first time since the 2012 All-Ireland Football final, the Donegal football team climbed the Hogan Stand steps as they collected the Division 2 League title with victory over Meath. It wasn’t a completely straight-forward game as Donegal found themselves 1-6 to 0-1 down after 14 minutes, but they came back to win by two points.

I is for Injuries: Injuries had a big impact on Donegal’s Super 8s campaign. They lost the influential Eoghan ‘Ban’ Gallagher to a broken ankle, while Neil McGee, Paddy McGrath, Jason McGee, Hugh McFadden, Paddy McGrath, and Patrick McBrearty all picked up knocks at the business end of the season. That stretched Donegal’s panel considerably, but it must be said that Mayo and Kerry have also had their problems with injuries. Donegal will need to try and find more depth over the coming months.

J is for Jamie Brennan: Jamie Brennan was outstanding for Donegal during the latter stages of the league, and into the summer months, and he was the best player in the Ulster Championship. However, it just didn’t happen for him in the Super 8s, and he failed to score against Mayo and Kerry. That was a blow to Donegal, particularly as he was almost unmarkable at the start of the campaign.

K is for Kerry: The Super 8s match between Donegal and Kerry proved to be a real thriller, with the sides level 16 times over the course of eighty pulsating minutes. In hindsight, Donegal might look back on the game as one they could have won, but they were happy with a draw in Croker. It was a relentless battle and Bonner’s team showed a huge amount of resilience to come away with a result.

21 July 2019; Jason McGee of Donegal scores the first score of the game, a point in the third minute, under pressure from Diarmuid O’Connor of Kerry during the GAA Football All-Ireland Senior Championship Quarter-Final Group 1 Phase 2 match between Kerry and Donegal at Croke Park in Dublin. Photo by Ray McManus/Sportsfile

L is for Long way to Tipperary: It’s a long way to Tipperary and it feels even longer on the road home after a defeat. Donegal led by 0-10 to 1-4 at half-time in the league encounter with Tipp, but they were left to rue Jamie Brennan’s missed penalty when they conceded two more goals in the second half.

M is for Mac Niallais: Much of the talk at the start of the season regarded Odhrán Mac Niallais and whether he would return to the set-up or not. Ultimately he had his own personal reasons for not doing so as he revealed in April. The classy Gaoth Dobhair forward was certainly missed,and time will tell if he will return to the fold in 2020.

N is for Noisy neighbours silenced: After losing three championship games in-a-row to Tyrone, Donegal finally got one over on their near neighbours when they produced an excellent performance to beat them in Cavan. However despite that win, the Red Hands have still managed to reach the semi-finals after getting a favourable route to the last four.

O is for O’Donnell Park woes: Donegal’s poor record at O’Donnell Park continued as they lost to Fermanagh in a terrible game. The county have only won twice in their last 16 outings at the Letterkenny venue, and their cause wasn’t helped when Caolan McGonagle was sent off after 19 minutes, and then Stephen McMenamin was sin-binned at a critical juncture.

P is for Promotion: It looked like Donegal might be destined for another year in Division 2 when they lost two of their opening four league games. However, Declan Bonner’s team defeated Kildare by 1-20 to 0-10 in their last match in Ballyshannon and that was enough to ensure a return to Division 1 next season.

Q is for Qatar: Paul Durcan left the sunnier climes of Doha in Qatar to come back to Ireland, and it gave the county a real boost when he linked up with the senior squad again. However, such were the brilliant performances of Shaun Patton, we didn’t get to see the big Donegal Town man in action.

R is for Rochford: Former Mayo manager Stephen Rochford joined the Donegal management team as Head Coach, and was credited with helping to develop a more expansive game plan throughout the year. The players raved about his input, but it’s a testing commute up and down from Mayo a couple of times a week, and it will be interesting to see if he is involved again in 2020. 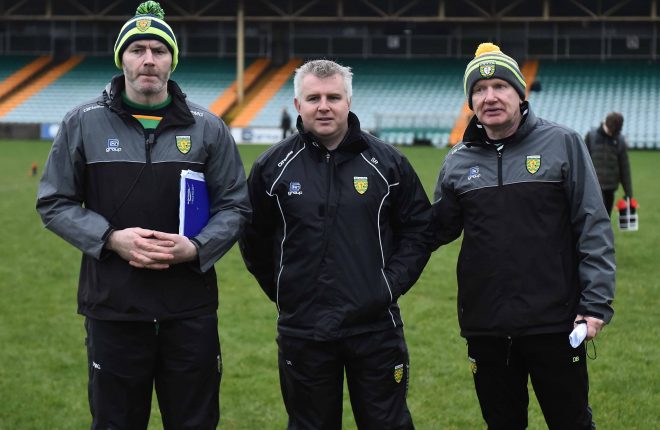 S is for Super 8s system: Donegal weren’t happy that their home game was last in 2018, but it wasn’t ideal to be away in the final encounter this season. Donegal were always likely to need some sort of result in McHale Park even if they had won their first two matches, so it was a serious help to Mayo’s chances to have the match in Castlebar. If the Super 8s are going to be persisted with, the final game should be at a neutral ground befitting of the anticipated attendance.

T is for Tenure over: Donegal’s short tenure as McKenna Cup champions came to an end when they were beaten at the semi-final stage by Armagh in January. McKenna Cup kingpins Tyrone were delighted to get their hands back on the pre-season silverware.

U is for Underachieved: It was an exciting season for Donegal with plenty of highs and positives. However, it’s difficult to shake the theory that they underachieved by not reaching the All-Ireland semi-finals. At one stage, Donegal were being talked up as potential contenders for the Sam Maguire Cup, but they were found wanting last week in Castlebar, and it will be a long winter for the players as they come to terms with their exit.

V is for Vociferous atmosphere: Donegal encountered a vociferous atmosphere in McHale Park last weekend. The Mayo supporters are known to be fanatical and they made incredible noise for the crucial match. They didn’t endear themselves to their visiting counterparts with the booing of Michael Murphy, but there is no denying that the home fans played a huge part in their county’s victory.

W is for Withdrawals: There were a number of high-profile withdrawals during the season. Martin McElhinney, Mark Anthony McGinley, Conor Morrison, Martin O’Reilly and Michael Carroll all left the panel at various stages.

X is for (Starting) XV: Two Donegal players – Hugh McFadden and Jamie Brennan started all 18 games for the county this year. Niall O’Donnell also played in every match but was a sub against Fermanagh in the Championship. Paul Brennan featured in 17 matches, yet only started five, while Jason McGee missed the Cork league game through suspension but played in the rest. 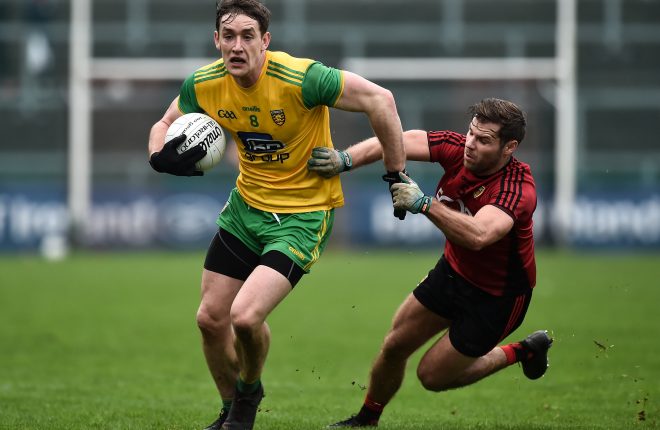 6 January 2019; Hugh McFadden of Donegal in action against Gerard Collins of Down during the Bank of Ireland Dr McKenna Cup Round 2 match between Down and Donegal at Pairc Esler, Newry, Co. Down. Photo by Oliver McVeigh/Sportsfile

Y is for Young talent: Declan Bonner handed out six debuts over the course of the season. Lorcan Connor, Oisin Gallen, Paddy Dolan, John Campbell, Odhrán McFadden-Ferry, and Eoghan McGettigan were the men to make their bows. Highly-rated Naomh Columba star Aaron Doherty also trained with the team but didn’t get the opportunity to play a competitive game.

Z is for Zip it O’Rourke: Colm O’Rourke caused a stir earlier in the summer when he questioned Michael Murphy’s influence over the last decade and his place as one of the country’s best players. His comments didn’t go down well, and the RTE panellist was left looking a little silly as Murphy went on to have one of his best championship campaigns for Donegal, and surely will pick up his third All Star later in the year.