Nowhere does that apply more than in the green-fingered world of Andy Donnell.

For almost a century the Donnell family has been sculpting Dunmore Gardens, regarded as one of the finest walled gardens in Ireland. For the last 65 of those years, Andy Donnell has been responsible for cultivating, pruning and weeding the stunning location tucked away in a quiet corner of his native Carrigans.

He donned the ceremonial head gardener’s hat when it was passed on by his father, who himself took charge from Andy’s uncle in 1940.
“I remember my uncle saying to me some years later that he knew a war was coming because three large chests of tea arrived at the estate for the colonel [then owner Robert McClintock],” Andy recalled.

Nestled along the banks of the Foyle, the gardens have a rich history dating to pre-famine times. Traditionally, they produced fruits and vegetables to feed the household and estate workers at Dunmore.

In more recent years, the grounds have blossomed into the what Andy describes as a ‘Secret Garden-style’ location, which the current owners, the McFarland family, have made the centrepiece of Dunmore’s unique offering as a rustic manor house wedding venue. The garden still provides plenty of fruit, vegetables and particularly herbs for wedding catering at the venue – and the raw materials for plenty of jam varieties which are served to bed and breakfast guests.

The walled garden to the front of the 18th century Dunmore House – the current house dates from 1742 while the original was built in the 17th century – spans two acres and more than three centuries.

Dunmore is interlinked with the local history and community. Carrigans native Andy is custodian of the garden and its rich history – having started working in the grounds at 15 years-old. He knows every inch of the ground and walls.

“The garden walls were built in 1847 as part of the famine relief scheme,” he said.

“We don’t know much about the earlier period, but William McClintock kept a detailed diary of what happened between 1845 and 1846. He wrote everything down. The gardener was getting 1 and 6d a day, his helper was getting sixpence a day – and three women brought in during the summer to do the weeding got thrupence a day,” explained Andy.

Andy also points to a later entry in the diary, where the gardener took sick and was sent to the infirmary. The following week the gardener died and his wife and five children were sent off to the workhouse. It is a cold reminder of the times and the hardships.

“There are also entries about sending a horse and cart to Derry for lentils and pulses for the soup for the poor. There probably was a soup pot here,” added Andy.

Andy officially came to work in the gardens in 1955. His father Sam had been working at Dunmore since 1940 alongside his uncle, who was head gardener for a number of years prior to that. 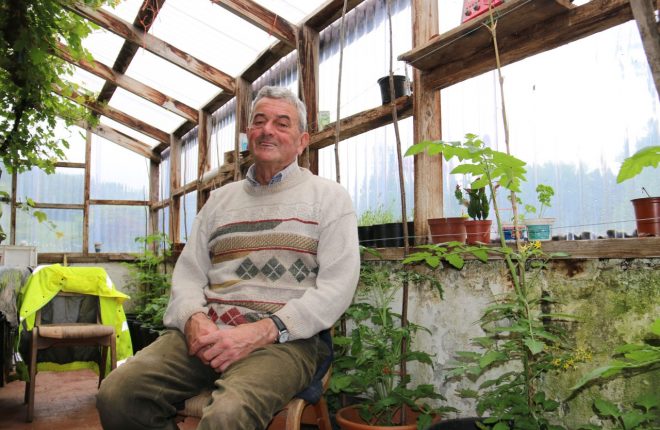 Andy surveying the garden he has maintained meticulously for more than half a century.

“When the colonel – Robert Lyle McClintock – fell ill, his sister-in-law, Mrs Lansdale, came to look after him. She returned to her own home after his death in 1943 and took my uncle to work with her,” said Andy.

Dunmore was sold to Thomas Keys of Keys Timber yard. Andy and his father continued to work for Thomas Keys.

“He had an issue with the drink and the house was adding to his woes, so his family persuaded him to go down the country. I went too, but things soon went pear-shaped,” added Andy.

Andy was balancing helping out in the garden while working full time in Coolkeeragh power station in 1968 when his father died suddenly from cancer.

“He had got the all clear and I was going to collect him on Wednesday morning.

“The postman came and told us at 6pm the evening before, that my father had died. That’s how you got your news in those days. Now, everything is instant and it all seems so urgent,” says Andy.”

There’s no rushing in Dunmore gardens. The passage of time and the seasons is an inevitable part of life and Andy’s work.

“It’s a thing you can’t rush – nature. You have to do it right, dig out the weeds properly and take them out by hand. It’s been a long time growing, you just can’t change it overnight,” explained Andy.

These days Andy is on hand to reveal anecdotes from the rich history of the place to wedding parties, corporate events attendees and those enjoying countryside breaks in the bed and breakfast at Dunmore Gardens.

“The weddings create a great buzz around the place and although it is a new venture for the McFarland family, weddings, garden parties and other events like the hunts and gymkhanas hosted at Dunmore have always been fantastic affairs. The first wedding I remember here was that of Sir John and Lady McFarland.” 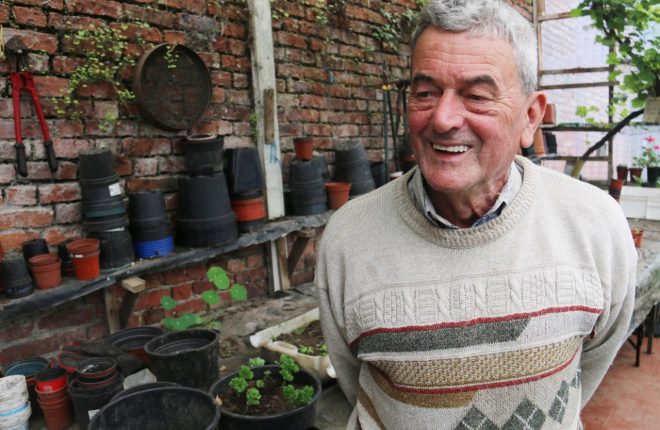 It’s hardly work when you love every minute of it.

Having just turned 79 years of age and recovering from a recent hip replacement operation, Andy has no intention of hanging up his garden hoe anytime soon.

“Sure, what else would I be doing but sitting watching television,” he says.

Andy took early retirement from the power plant in 1995 to look after his late wife Ruby who suffered from Multiple Sclerosis.
“It’s not about the work, it’s about getting out and meeting people and seeing what needs done every day. It’s not like working in a factory, there’s no set routine. The garden’s part of you and you’re part of it,” explained Andy.