TRIBUTES have been paid following the passing of one of Rathmullan’s best known characters, Alfie McCollum.

Mr McCollum ran the Old Courthouse curiosity shop in the town for over 40 years.

The shop’s eclectic nature made it a magnet for tourists and, on occasion, television crews.

Following a visit in 2014, Joe Mahon of Lesser Spotted Ulster described how “every inch of it was crammed from floor to ceiling with the most extraordinary collections of memorabilia, antiques, bric-a-brac, crockery, jewellery, glassware, paintings, signs, postcards, toys, skeletons and at least one specimen of every single man-made object that ever existed on earth”.

Mr McCollum was also featured as part of the ‘Shared Stories’ film project which was produced in 2012 by the Regional Cultural Centre and directed by Derek O’Connor.

In it he recalled how he originally planned to open a restaurant rather than an Aladdin’s cave of bric-a-brac and antiques. 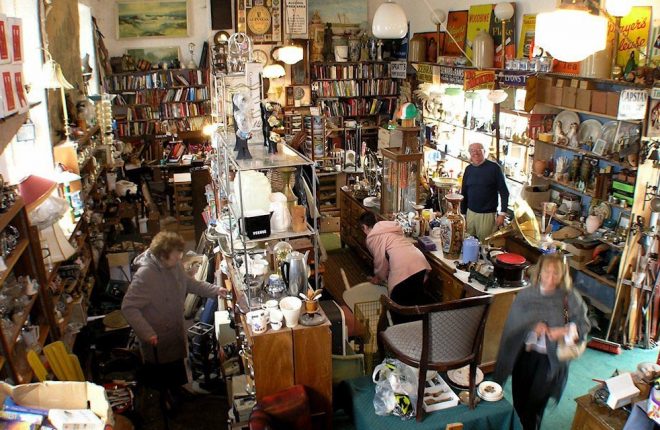 An overview of Alfie’s store, regarded by some as the finest curiosity shop in all of Ireland.

“I worked in the catering business before I bought this in 1977,” he told Derek O’Connor.

“I was going to open a restaurant but in my later years I decided against that idea and began instead going to auctions. I began to accumulate and hoard until I eventually I had to start selling to make way for other stuff.”

Mr McCollum recalled how visitors often mistook his store for a museum rather than a retail outlet, something he had no problem with.
“I’m happy enough as long as they are coming through the door,” he told the cameras.

Both the Regional Cultural Centre and Derek O’Connor have offered their sympathies to the McCollum family.

Writing on his Facebook page, Derek O’Connor said, “Sad to hear of the passing of Alfie McCollum, owner of the Old Courthouse in Rathmullan, the best little curiosity shop in Ireland. A gentleman, rest in peace.”