Advertisement
HomeSportGAAIn pursuit of Murphy and McBrearty… the inside story
Advertisement

Seamus McDaid was once the Irish connection that linked former AFL agent Ricky Nixon with the elite young footballers in GAA.

The Ramelton native was the controversial Australian’s Irish recruitment co-ordinator and was heavily involved in the pursuits of both Michael Murphy and Patrick McBrearty.

In their teens, both players shunned advances from Oz and have since gone on to become All-Ireland winners and superstars of Gaelic football.

Nixon would later became embroiled in a number of unsavoury off field matters and McDaid would return to Donegal. He now heads up the family business, bringing the famous ‘Football Special’ soft drink and the brand’s other numerous offerings to a worldwide market.

He sat down with the Donegal News this week to look back at his time in Australia and those failed attempts to lure Donegal’s star duo Down Under, back in 2010.

How did you first get involved with the Flying Start sports agency?

“At the time, I was studying Sports Management at UCD. We were all looking out for jobs. I’d reached out to Ricky Nixon, just emailed him.

“I said, ‘look, I’m in Ireland. I’d love to help you out with this project’. He got back to me and said he’d love to have me on board.

“My first love was Football Special but next to that I always wanted to be a sports agent. But I thought how will I ever be able to do that based in Donegal?!

“I remember watching the TV show ‘Tall, Dark and O’Halpin’ and thinking why doesn’t some Irish person just moved to Australia, set up an agency and just manage Irish Aussie Rules players.

“When this opportunity arose and Flying Start were in the Irish market, they basically did that. I reached out and they said come on board.

“I kinda became the head of the Irish operations when I was still at college. But that was handy enough as I was in and around the same age as the lads we were recruiting.”

When or how did Michael come on Ricky’s radar? 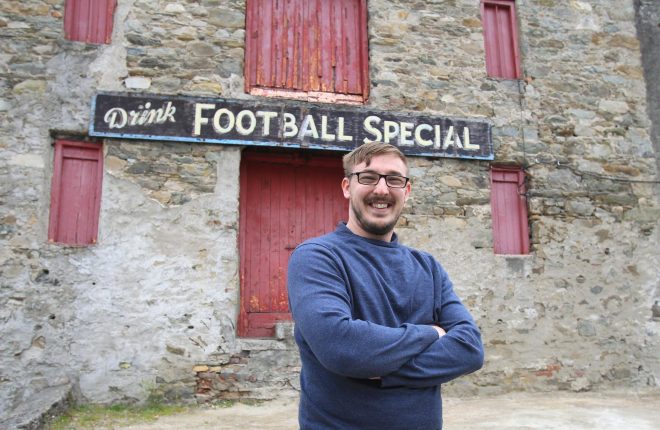 “From growing up, being the same age and playing against him, Michael was an obvious one. He was on our radar the moment I started.

“I was conflicted. I was from Donegal. I was thinking, ‘Jesus, if Michael goes that’s a big blow to us’. I’m sure he gave it genuine consideration. But I was never sure his heart was really in it.

“He was meant to come and Kerry lost an All-Ireland final to Tyrone. He stayed on, won it the next year, and then he was all in with the Aussie Rules.

“We tried hard with Michael but his heart was always set on Donegal. I mean, without him, they probably wouldn’t have won what they did.

“I remember tweeting out after 2012 that although we hadn’t taken him to Australia, what he’s achieved now was immortality in Donegal. No Aussie Rules club could have offered him that.

“His legacy too for those younger lads coming in; he’s set a standard. If anyone gets remotely close to that benchmark they’ll be some footballers.”

You were public enemy number one at the time. Martin McHugh and a number of other high-profile GAA personalities were highly critical of Ricky’s approach. You both turned up, video camera in hand, and openly filmed McBrearty at an Ulster Schools final. Kilcar folk were fuming!

“God yeah. I remember that day well. Again, that was typical Ricky. He’d have loved that. That was his style, he played up to it. He was a bit like Michael O’Leary!

“His theory was that if everyone knew him, it would be so much easier for me when we went to recruit people. Because I was ringing these lads out of the blue and saying ‘we’re interested in you’. No one knew who I was but everyone knew Ricky Nixon.

“I was involved in UCD at the time. I was still a student but I was managing the Freshers side. A certain person there was adamant that I shouldn’t be involved with a football team while I was working in that profession.

“My argument was that those lads were going to give it a go, with or without me. But none of the players I ever recruited were ever homesick. I moved to Australia with them and made sure they didn’t have to worry about anything other than football.”

“When I first put a list together of players, I was thinking midfielders and big full-forwards. When I eventually went to Australia and worked closer with the clubs I realised that wasn’t what they were looking for at all.

“They were looking for athletic wing back types. It changed how I viewed football. It made it harder to go to football matches. People immediately thought you were there to run the rule over the star forward, say a Paddy McBrearty.

“And yeah, he was one of the players we were looking at but we’d our eye on others as well. We were also looking at Jamie O’Reilly from Down at an Under 21 game one time.

“He’d probably have been the fifth best Down player on that side that day in Casement Park. But we felt he’d make the best Aussie Rules player. Look at it now, Eoghan Ban Gallagher was over recently. He’d be a very good Aussie Rules player. That’s the ideal kind of body type and athlete they’d be looking for.

“We weren’t always there for the obvious superstar. The criteria was much different. You were looking at could they track back, how well did they communicate with team mates. All that kind of stuff, on a professional level, is what they are looking out for.”

Yvonne Bonner has gone over to the WAFL. She’d a brilliant first season, made that transition look easy…

“That’s testament to the standard of Irish ladies Gaelic football. Put them up against any other female sporting athletes in the world and they’ll hold their own. That’s amazing.

“It’s at such a high standard here now. I’m not in any way surprised. The WAFL is only going a few years so that depth of talent that exists in the men’s game isn’t there just yet. So I’m not shocked they’ve turned to the Irish girls.

“I’ve no doubt there’ll probably be a few more going over. The only concern I have for them is I’m not sure how financially well they do out of it.

“That said, what an opportunity. If you’re a young girl, no ties, it would be a great experience.”

How close did you get with Patrick?

“We never actually got as far as talks. Others I’m sure did. Patrick came on our radar around the same time Flying Start began to implode and was being sold off. He would probably have been pursued further. It was more to do with that than him or his ability.”

Ironically enough, Tadhg Kennelly, one of Nixon’s other more vocal detractors at the time, now heads up that very same search as the Aussies’ International Head of Recruitment…

“Tadgh was very critical of us at the time. He does the same job now which is kind of ironic. But that’s the nature of it!

“At the time we were there, it was much harder to recruit. There were only eight rookie slots. The AFL did a deal with the GAA. They classed Irish players as Australians. Every other country in the world was International but not Ireland.

To get rid of Flying Start, the AFL basically said to the GAA we’ll change this so Irish lads are classed as International rookies and we, the AFL, will run the recruiting and talent ID camps.

“Now, an Irish player’s wage doesn’t come off a club’s salary cap and doesn’t come off their roster. It’s a lot easier to go now. The negative side for me, from an agency background, is that there is now a standard contract. All the clubs get access to the players, which the clubs don’t really want.

“With Tommy Walsh, we’d three clubs talking to us. Tommy signed a lucrative rookie deal because we were able to negotiate on his behalf. You won’t get that now.”