From July 10 to 28 the festival will host 100 events featuring over 300 artists from across the globe during 19 magical Donegal days and nights.

The Donegal International Folk and Roots Weekend, presented in association with the Regional Cultural Centre, Letterkenny, returns with some of the finest national and international guests for the opening week of the festival.

Celebrating its fifth anniversary, the weekend during Donegal’s premier summer festival, is a celebration of folk, roots and traditional music from around the world, including several free and family-friendly events.

With a reputation for delivering some of the best original music, spoken word and comedy the county has to offer, Mouthpiece Open Mic, presented by Artist Support Network (ASN) promises laughter, tears, surprises and a warm, supportive atmosphere in The Cottage Bar, Letterkenny on Wednesday, July 10, at 9pm.

Earagail Arts Festival invites you to an afternoon of free seisiúns in the stunning surroundings of Glenveagh Castle, Glenveagh National Park, for the annual Ceol ag an Chaisleán (Music at the Castle) on Thursday July 11 from 1 to 5pm.

Tutors from this year’s Ceol na Coille Traditional Music Summer School will be performing in the annual Ceolchoirm le Ceol na Coille concert in the RCC on Thursday July 11 at 8pm. Please note that this concert is an annual sell-out so early booking is highly recommended.

Earagail Arts Festival’s flagship event for 2019 also takes place over the Donegal International Folk and Roots Weekend. Presented by the festival in collaboration with Rajasthan-based festival Jodhpur RIFF, Citadels of the Sun in the RCC on Saturday July 13 (1pm) is a new two-part creative collaboration sharing common themes and stories that unite Irish and Indian culture through music.

The concert will be followed by followed by The Music and Culture Of Rajasthan, a presentation by Divya Bhatia, Director of Jodhpur RIFF at 4pm.

Later that night (10.30pm) for the second instalment of Citadels of The Sun, landscape theatre company LUXE celebrate connecting Donegal and Rajasthan with a free illuminated musical adventure on Letterkenny’s Main Street. 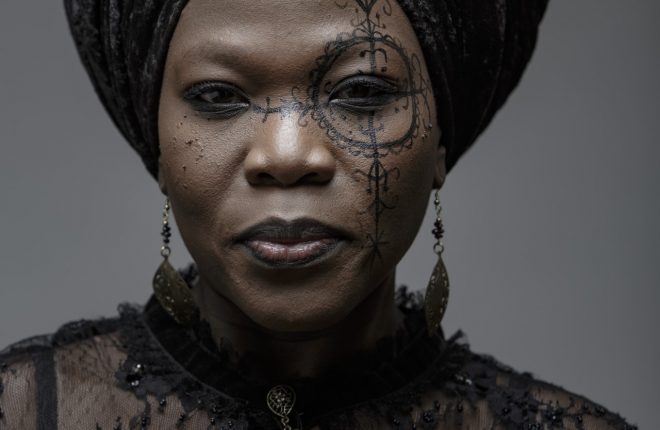 Moonlight Benjamin who will be one of the highlights of this year’s Earagail Arts Festival.

One of the hot tips of the weekend is Moonlight Benjamin at the RCC on Saturday and July  13 (8pm). Moonlight creates a powerful and original fusion between Caribbean voodoo and 70’s US blues rock.

Having lost a number of influential keepers of the tradition in the last year, such as Tommy Peoples and Vincent Campbell, this year Tara Connaghan and Mairéad Ní Mhaonaigh will gather some of the mentors of Donegal fiddle traditions from around the county to give a taste of the passing on of this great tradition and heritage. Ó Ghlúin go Glúin – From Generation to Generation is being hosted by the RCC on Sunday, July 14 (1pm). Please book early.

The festival returns to the historic 17th century surroundings of Castle Grove with Virginia-born virtuoso banjoist and songwriter Morgan O’Kane, joined by one of Donegal’s finest duos, Without Willow.

Joan Wasser is an American musician, singer-songwriter and producer. She began her career playing violin with the Dambuilders and played with Black Beetle, Antony and the Johnsons, and Those Bastard Souls. Since 2004 she has released her solo material as Joan As Police Woman and on May 24 released her new triple album compilation, ‘JOANTHOLOGY’. She plays An Grianán Theatre, Letterkenny on Sunday July 14 (8pm).