Advertisement
HomeSportMark Connolly on coaching, competing and being a world champion
Advertisement

When most of the population near the age of 60, the tendency is to slow down and indicate over to the slower lane of life. But Finn Valley AC’s Mark Connolly isn’t part of the most group. Having turned 60 in April, he’s still looking to set new goals. Still keen to ask the questions. Still prepared to dog it out.

Last Friday night, Mark was named as the overall Sports Star of the Year at the Derry City and Strabane Sports Awards in the Fir Trees Hotel in Strabane, having enjoyed a hugely successful season. He helped the Irish over-55 men’s team to gold in the World Masters Cross Country Championships in Poland in March, while he bagged no fewer than five individual national medals on the track as well. He claimed gold in the indoors 3,000 metres and silver in the 1,500 metres, while he also took silver in the M55 outdoors in both the 5,000 metres and 1,500 metres.

This Saturday night, the community of Aghyaran, and beyond, will come together to honour one of their own for his world gold medal success. The border town had never produced a world champion, so they’re not going to let the opportunity pass without marking the achievement.

“It was nice to get the award,” he says of last weekend’s presentation ceremony.

He trained for two years in preparation for the World Masters Cross Country Championships earlier this year.

An ankle injury back in October ruled him out of action for a period. It also put paid to selection on the Irish team for the Swansea international cross country meet.

“But time out means time down,” he says with a laugh.

“I had my head set on going to Poland. I got there and thankfully everything worked out. Poland put on a class show and there was a real international feel to the event. Everyone got a really good chance to compete and it was seriously competitive. There was a super atmosphere and there was a great togetherness about the Irish team – we all gelled extremely well.”

Mark, who is employed by Derry City/Strabane District Council as an athletics coach, finished 19th overall and set up Ireland for a famous victory – they pipped England by just seven seconds to secure team gold.

He put in a serious shift over the winter months. Stamina work on the road with strength and conditioning in the gym was the weekly ritual. Races were few and far between.

“I suppose I have to set an example, too, to the athletes I’m coaching and working with,” says Mark who looks after around 300 runners of varying abilities.

“It was in Abbots field in Donegal Town in 1977. I was too old for the under-17s. At that time there was a senior A and a senior B race, so I went with the novice-type runners in the senior B race. The man who got me involved with Finn Valley was Hugh Gallen, Christine Lynch’s dad. He came up to the house one Monday night and asked my mother and father if I could train with Finn Valley. I had been showing a bit of potential in the parish miles. We lived about a mile from the border and he collected me at the border on Tuesdays, Thursdays and Sundays. We walked up to the border, me and the Penrose boys. We just got on with it. While Patsy McGonagle was the coach, Hugh mentored me.”

And so began a long association with Finn Valley AC.

“I’m passionate about the sport and I enjoy it. I love the friendships, the rivalry, the scoffing and the craic. That’s all part of it and you need all that.”

Combining coaching with competing means he can always see both sides. The only way success is achieved, he insists, is through hard work.

“If I’m coaching and still doing the hard work, I’m not asking anyone to do anything I wouldn’t do myself.”

To get a gold medal at the World Championships, Mark had no option but to jump in with the seniors at club training and hang on as best he could. 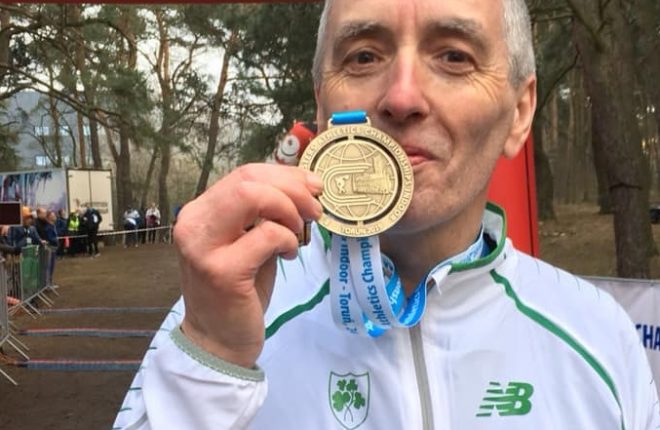 Mark Connolly with his gold medal after the world masters cross country championships in Poland in March.

The one aspect Mark enjoys about running is that men and women train together all the time.

“In a lot of football clubs and other sports, there are two separate entities. Whereas in athletics we are all together,” he stresses.

“But I was nowhere with those times,” he points out.

“My best finish in the nationals was 14th.”

The day he set his PB for the 10,000 metres, the race was won by double world senior cross champion, John Treacy, who clocked well under 30 minutes. Mark remembers doing his best up the home straight to make sure Treacy didn’t lap him twice.

“That’s how good the man was.”

Mark has been coaching since his early twenties and has a hand-print on Aghyaran, Castlederg and of course, on Finn Valley.

He captained his club for many years and thrives on being in the thick of things on both sides of the track.

“You get a lot out of a club and it’s so vital that you put something back. Probably the most enjoyable times of your life are when you are going away with the club or with teams.”

Winning the national intermediate cross country team title along with Joe Brennan, Pat Higgins and John McGlinchey in Edenmore in 1989 is, by far, his proudest moment in the blue and white singlet.

“And that’s because of the fact that we had failed to win it the four previous years. That was a big day and there was a massive crowd at it. We won it easy in the end.”

The year before, Mark and co travelled to Waterford for the same championships. They had trained diligently for three years.

“That was our main goal and we wanted to be the first team from Ulster to win that national title. We were as far away from it as any lighthouse that particular day. I remember throwing my spikes away and Patsy sending one of the young fellas over the hedge to get them. He told us not to panic and give it one more go.”

And they did just that 12 months later.

“You have to give up everything to try and chase it down.”