Between July 4 and July 7 over 100,000 people will descend on Letterkenny’s twin town of Rudolstadt in East Germany. Almost 100 acts from across a range of genres will take to the stage with all four nights already sold out.

Each act has to audition for their spot and so impressed were the organisers with In Their Thousands that they have asked them to play two of the main stages.

The invite is the latest landmark in what has already been a cracking year for the band. They recently released their debut album Acrasia which is still receiving rave reviews from national and international music journalists.

Letterkenny man Karol Kerrane has lived in Rudolstadt since 2010 and was a driving force behind the twinning arrangement cemented last year. He said he was delighted that this year’s festival will have a Donegal element to it.

“To play in the festival you have to register and submit some music. The band applied and clearly the organisers have recognised their talent and invited them over which is fantastic,” said Karol.

The trip to Rudolstadt will be the second in a matter of months for at least one band member. Ruairi Friel was in the town as part of its St Patrick’s Day celebrations.

Karol Kerrane added, “I have met the band and they will be great ambassadors for Donegal. I’m very proud of the fact that they will be here. There will be around 100,000 people in Rudolstadt for the weekend and there are lots of stages of different sizes. The band will perform on two of the biggest stages so literally we will have In Their Thousands playing to thousands which is wonderful.” 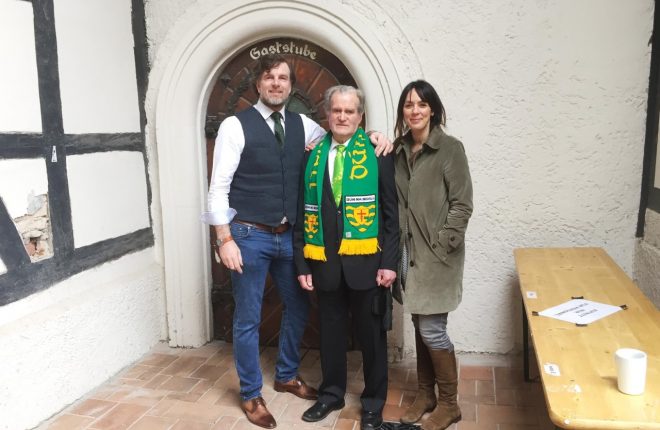 Karol Kerrane and his wife Selena Mowat with former mayor of Letterkenny Ian McGarvey. Selena did the art work for the In Their Thousands album Acrasia.

Karol added that ideally he would like to see a reciprocal arrangement put in place whereby German musicians would play in Donegal as part of the Earagail Arts Festival.

Earagail Arts CEO and Artistic Director Paul Brown revealed it is something he has already been looking into.

“We are in the process of creating a partnership between Rudolstadt and the Earagail Arts Festival and we are already looking at collaborative commissions or the sharing of artists in the future,” said Paul.

“I have travelled out there and met the festival organisers and an invite has been extended to them to visit Donegal. So hopefully someone can come along and see what we do and we can continue to work towards those collaborative projects.”

In Their Thousands member Ruairi Friel said the band was looking forward to returning to Germany, having previously toured the country.
“We did a run of maybe 18 or 20 shows in Germany before but nothing on this scale,” said Ruairi.

“We have friends out there and German audiences are amazing and so responsive and interested in what you do. We’ve had some great experiences gigging in Germany and we are really looking forward to getting back.

“It will also be nice to see Karol and his wife Selena again because she did the artwork for our album. It will be lovely to re-establish that link.”

If you can’t make it to Germany, you can catch In Their Thousands a little closer to home. The band will be centre stage in Letterkenny’s Regional Cultural Centre next Friday night, June 28. Check out the RCC website for more details.