Donegal and Tyrone have developed a huge rivalry over the last decade, and we’re all looking forward to the latest instalment this weekend.

As derby games go, it’s about as big as you get in Ireland at the moment.

Dublin and Meath isn’t the battle it once was, and Kerry and Cork has lost some of it’s bite now that the Rebels have dropped off a bit.

Mayo and Galway have had some lively encounters, but they still probably don’t measure up to games between Donegal and Tyrone.

With the exception of the 2017 semi-final which the Red Hands won easily, the counties have played out some really tough championship encounters, and they are usually still on the line heading into the last few minutes.

Since the final whistle blew in our quarter-final with Fermanagh, our focus has been solely on this game.

We only had two weeks to get ready and that’s not a long time, but there is a real pep in the step of everyone this week, and you know that a big game is coming.

Tyrone are a serious outfit. They were in the All-Ireland Final last year, and they have been regularly making semi-finals.

They have some very classy players with the likes of Peter Harte, Niall Sludden, and Mattie Donnelly.

Mickey will have them well set up as always and they will bring a lot of momentum to Cavan.

They finished the league very strongly beating Dublin, and they have got the better of Derry and Antrim already this season in the championship.

We have come up against Tyrone a lot both at senior and underage level, and you know you will always get a very difficult game.

There is a serious rivalry between the two teams, but there is also mutual respect.

These are the type of games that players want to play in. Our lads have been hitting the gym to be physically ready, and there has been a lot of hard work put in on the training ground.

We will be tested in every facet of our game, and hopefully we will have enough to get through to the decider.

Ulster Final day is a special occasion and we want to be in Clones again this season.

There’s going to be plenty of excitement about Cavan on Saturday and I hope we get a lot of support in Breffni.

Cavan is a real GAA county and they are probably on a bit of a high following their own county’s fortunes at the moment.

Tyrone will bring big support no doubt, and hopefully we will see plenty of green and gold in the stands. 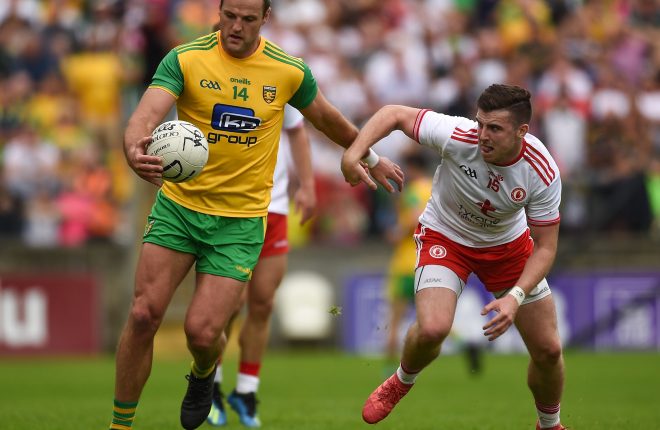 I’d encourage fans to set off early. Cavan is a good town and there will be plenty of craic about if you’re looking for a bite to eat or a drink beforehand.

There is also a good curtain-raiser down for decision with Maxi Curran’s ladies team taking on Tyrone.

The Donegal ladies are reigning Ulster Champions, but they have lost a lot of players from last season.

Tyrone won the All-Ireland Intermediate title and that will have boosted them so it should be a good tussle.

With quality players like Geraldine McLaughlin and Karen Guthrie, you’d expect Donegal to win but it won’t be a pushover.

Hopefully both teams will win and make it a super Saturday in Cavan.

Gaelic Football has taken a fair bashing over the last few years, but we have been treated to a fine championship so far this year.

Not every game has been a classic or a tight match, but you’re never going to get that.

A lot of the fare has been good, and the Ulster Championship has really caught the imagination again this season.

We have had six games already this year in the province, and with the exception of Tyrone’s facile win over Antrim, they have all been in the melting pot heading into the last ten minutes.

I was at the Cavan and Armagh semi-final last week, and it was brilliant to watch the drama unfold, with two teams giving everything to their county’s cause.

We haven’t seen much Gaelic Football on the TV this year, and hurling has dominated the schedule set out by RTÉ.

I can understand where they were coming from as the Munster Senior Hurling Championship was fantastic last season.

However, it has been poor this year with hammerings dished out every week, and there has been no great excitement with it.

The football qualifiers start this week and while there are not too many stand-out fixtures, pretty much every team has a good chance of winning heading into the weekend.

The big one is Monaghan against Fermanagh, and the Farney county will be wary after being caught out with a late goal last year.

That match now forms part of a double-header with Cavan and Armagh’s replay next Sunday in Clones, and they should be two good games.

However, there will be no live coverage of either and we will have to wait until 7pm for deferred coverage of the semi-final replay.

I’m sure a lot of people would like to see that game on live this week but it’s not happening, and I think GAA supporters have a right to feel short-changed.

There are 12 senior football championship matches down for decision this week, and yet only one will be shown live.

There are four senior hurling championship matches and three of them will be live, while two Joe McDonagh Cup games will be shown on GAA Now.

I think there should definitely be more Gaelic Football on TV. More and more teams are playing an expansive style of football now and it is making for good viewing.

Yes there are still half-forwards dropping back occasionally but there is a lot of focus on attack.

Gaelic Football is in a good place and it’s only going to get better.