We have had an outstanding Ulster Championship so far this year, and I think the final could serve up a cracker.

It’s the most competitive of the provincial competitions and I said just over a month ago, that any one of five or six teams could genuinely get their hands on the Anglo Celt.

Big hitters like Tyrone, Monaghan, and Armagh would have had high hopes, but it wasn’t to be for them and that leaves us with a Donegal and Cavan decider.

It’s quite a novel final and you have to go back to 1983 to the only other time that we contested the provincial decider against each other.

I remember that game well and Seamus Bonar scored a penalty as Donegal went on to win by three points. Hopefully that’s a good omen.

I always loved Ulster Final day going back to when I was a young lad.

I was lucky enough to play in four finals on the trot, and I also managed in the provincial decider in 1998 when Derry beat us, but things went a bit better last year.

There’s always a great build-up coming into the match, and I enjoy hearing the craic with people getting their tickets and organising buses and things like that.

There’s always talk that the Ulster Council would like to move the final away from St Tiernach’s Park.

But I think there is something really Irish about the way we all flood through the back roads to get to this small remote town in Monaghan.

For 364 days in the year, there might not be a huge amount of life about Clones, but on Ulster Final day it comes alive. 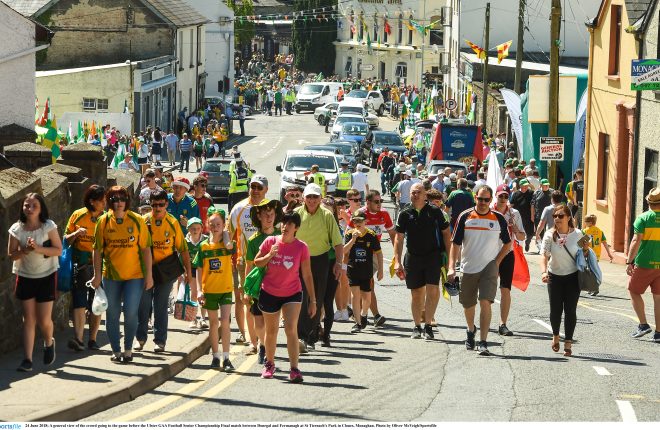 24 June 2018; A general view of the crowd going to the game before the Ulster GAA Football Senior Championship Final match between Donegal and Fermanagh at St Tiernach’s Park in Clones, Monaghan. Photo by Oliver McVeigh/Sportsfile

People will get there early for food and drink, and there will be a real carnival atmosphere by 1.45pm on Sunday.

When you’re involved, you’re just trying to focus on the game ahead, but there’s no escaping the noise and buzz before the match.

There’s no doubt that we have had a great run of it as this is our eighth final in nine years.

We have had a special crop of players over the last decade and they have given us some great days.

You’ve got to remember that it isn’t that long ago that we had gone 19 years without lifting the Anglo Celt Cup, and appearances in finals were rare.

There’s always a buzz in getting to the final, but I find that you only really enjoy the day when you win. It can seem a long way home when you’ve watched some other team lift the cup.

From our point of view, we played well in the semi-final against Tyrone, and that was great.

But there were no trophies handed out that day. Semi-finals are just stepping blocks to finals, and that has been our outlook over the last fortnight.

Training has gone very well and the boys are all itching to go and can’t wait to put on the green and gold jersey this weekend.

Cavan haven’t been in an Ulster Final in 18 years, and it’s a football-mad county.

I would have worked up there a lot over the last two decades, and they are really passionate folk, and they have had plenty to cheer about this year.

They were very impressive in beating Monaghan, and I was at both their semi-finals with Armagh when they were the better side and definitely deserved their win in the replay.

I urged people last week to get their hands on tickets and it looks like we will have excellent support on Sunday, and hopefully our fans will back us right from the first whistle to the last.

It’s a day we are really looking forward to and we will be doing everything in our power to get the win.