MOST 22-year-olds head to Crete for a summer holiday, but Gavin Grier has a different reason to visit the Greek Island this week.

Grier is part of the Ireland team that will take part in European Deaf Football Championships from June 2 to June 15.

A cool and composed player whether the sport is soccer or gaelic football with Milford, Grier always gives it his all every time he crosses the white line.

He encountered a hurdle early in his life, but that hasn’t held him back and he is looking forward to pulling on the famous green shirt over the next week.

“I have had a hearing loss since the age of two. I am hearing impaired in both ears so I wear hearing aids as a result. It is genetic and comes from my dad’s side of the family. I have a couple of cousins and aunties and an uncle with a hearing loss so I am not the only one.

“Growing up was a challenge for me particularly at school. It was hard work and I struggled at times but I received great support from my friends and all the teachers that I had.”

Grier comes from two well-known families and he was rarely seen without a football at his feet when growing up.

His father George developed a reputation as a dangerous attacker during his own playing days, while his mother, Martina’s family – the McHughs – are synonymous with football and sport in Milford.

“Dad was apparently a good footballer back in his time. He used to play up front with Finn Harps, Fanad United and Milford United. He also played for the Irish University team when he was at college in Coleraine. It’s safe to say I didn’t inherit his goal scoring touch!

“My cousin Catherine is big into football too and she currently plays for the Ireland women’s deaf team.

“My mum’s side would be big into football too. My grandad John was heavily involved in managing local football teams, and he was also chairman of the Donegal League.

“All my uncles played football in their time and my cousins Darragh and Conor have represented Ireland at different levels. So yeah I come from a big football background.”

This is the ninth year of the European Deaf Football Championships, and while Grier knew there was an Ireland team in operation, it wasn’t really on his radar.

However, the LYIT student decided to put in a big push this year to try and make the squad.

“I first heard about it a couple of years ago but I wasn’t really interested because I was focused on playing gaelic. I heard about it again from my auntie back in November when she saw a Facebook post regarding new players needed for the team.

“I just thought I would give it a go and see what happens. She knew the manager and she got his number for me and I contacted him saying I was interested and he invited me up for a trial, which was in January.

“Honestly, I didn’t know what to expect. I have never come across playing against people with hearing loss. But the standard is really good, we have a lot of good players and our team is mixed with experience and youth.”

Grier isn’t allowed to wear his hearing aids when playing with the Ireland Deaf team and that is a challenge that he is trying to adapt to.

However, that didn’t stop him making the international squad, and he hopes to see some action at right-back or right-midfield in Crete.

“We had two trial matches in January and March and a training session in February. My manager Joey (Watson) and his assistant manager Michael (Johnston) had to pick 20 players out of 26. The squad was finalised around the beginning of March.

“It was a tough process and I’m sure it wasn’t an easy job for the managers to drop six of the lads. They will feel unlucky but at the same time, we do have a very good squad and we all work hard and contribute to the team.

“We’ve met up once a month from January to March, met up twice in April and met up over the four weekends in May. Other than that, we are all training away with our local clubs twice a week.”

There was some disappointment for Grier last week as he was part of the Milford United side that lost the Brian McCormick Cup Final to Keadue Rovers.

They didn’t get their hands on the league title either, but Grier nailed down a spot in the team early in the season, and was a starter when available.

“Playing with Milford has helped a lot, we have two great managers ‘Budgie’ (Shaun Sandilands) and Peter (Doherty), both with a lot of experience from playing in the Donegal League.

“We did alright in the league but could have done a lot better and we unfortunately lost the cup final last Sunday against Keadue.

“I also have to give credit to the likes of Joe Ferry and Arthur Lynch who managed me at underage for Milford, Jim McCahill and Kieran Boyle at Swilly and Declan Sweeney at Fanad.” 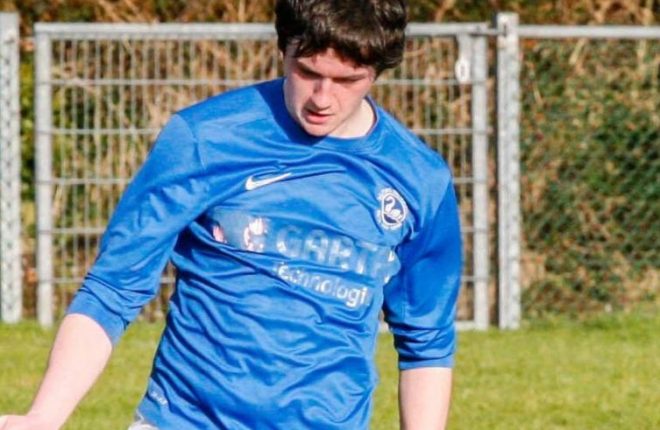 Grier isn’t the only Donegal man who will board the plane to Crete as Noel O’Donnell is also part of the squad.

This will be the fifth Championships O’Donnell has attended and he has been a source of encouragement for his young teammate.

“Noel O’Donnell who plays with Bonagee is part of the team too. He’s our centre half and he has been on the squad for a number of years.

“He would be one of the more experienced players on the team.

“He’s been very good to me, giving me lifts to training and matches and he’s been very helpful with advice and helping me get settled into the team.”

The Ireland team will leave from Dublin Airport on Friday and they will be one of 16 teams taking part.

Their first game is against Hungary on June 3, then they take on a highly-rated Turkey side two days later, before finishing off with a clash against Denmark on June 7.

“Turkey are ranked number one so we can’t wait to test ourselves against them.

“The aim will basically be to enjoy myself and enjoy the experience because I’ve never been overseas to play football before and obviously to try and help the team whatever way I can. Hopefully we can achieve what we want to achieve.

“I would also like to thank my sponsors Aurivo, McGinley Motors and Pramerica for their generous sponsorship, without them this trip wouldn’t have been possible.

“It will be a huge honour to represent Ireland. I never thought I would get the chance to represent my own country so I’m really looking forward to going away.”