LETTERKENNY musician Mick Blake will be among artists performing at an alternative concert being organised in opposition to this year’s Eurovision Song Contest.

‘Palestine – You’re A Vision’ will be streamed live online on the same night and same time as the Eurovision is taking place in Israel. Among those signed up to play are Christy Moore, Frances Black, Mary Coughlan and Kíla.

As well as Mick Blake, Donegal will be represented in former Eurovision winner Charlie McGettigan and the band Free Speaking Monkey which features Ballyshannon’s Brian Sweeney. 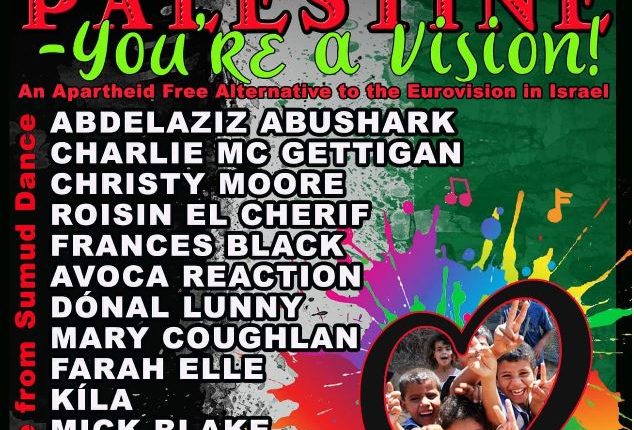 A snippet of the acts set to perfom at ‘You’re a Vision’.

Mick told the Donegal News he was delighted to be asked to take part in the alternative ‘You’re a Vision’ event.

The musician said, “It was Kíla who came up with the idea for something fairly big in Dublin and they put out a shout for musicians. They got a great response and what they have come up with is a concert that is going to be streamed live and that will be in direct competition with the Eurovision.

“I put it up on my Facebook page on Friday and it has been shared all over the place.”

Since Israel won the Eurovision last year there have been calls for Ireland to boycott it in a show of solidarity with the people of Palestine.

Irish Eurovision officials have however resisted the protests and say County Clare singer Sarah McTernan will represent the country in Israel on May 18.

Mick Blake said it was unlikely there will be a change of heart at this late stage.

“I don’t think they will change their minds now. What RTE is saying is that politics should be left out it and that it is merely a meeting of different national television authorities in Europe and that they are almost obliged to go.

“I suggested that it could be deferred for a year and the Irish entry go next year instead but I can’t see them pulling out at this late stage.”