The Ulster Championship came alive last week with two brilliant games, and that has really whetted the appetite for Donegal’s match with Fermanagh today which throws-in at 2pm.

It really is a special tournament, and it’s different from all the rest because it is so competitive.

I always get a buzz in the week leading up to the first championship game. I used to get it as a player and I still get it now that I’m a manager.

It can feel like that it’s a long way away at some stages in the season.

There were nights in Convoy over the winter months when there was hail and snow coming at you, and you’re just getting battered.

You wonder on those nights why you’re doing it all, but they stand to you when the ground gets harder and the sun appears in the sky again.

Every game is important and each and every team of mine will always aim to win every time they take to the field.

But there’s no point in comparing the championship with other matches. These are the big days you are working towards, and yeah there is greater pressure, but there are also greater awards.

I’ve been speaking to a lot of people around the county this week in the build-up to the match and they are all looking forward to going to Enniskillen.

It’s a long time since October now when we were paired with Fermanagh and both teams have had plenty of time to get their heads around that now.

To be honest, it’s not really until after the league that you zone in on your opponents.

The NFL can be very congested, and you’re really just taking it one week at a time at that stage.

We took a week off after the Division 2 League Final, but from the first training session back there has been a good focus ahead of the Fermanagh match.

The lads have all trained really well, and I’ve been very happy with their attitude over the last six or seven weeks.

They are a good bunch of fellas who are looking forward to putting on the green and gold jersey on Sunday and representing their county.

I think it’s important that we have a lot of supporters in Brewster Park to try and help the team get over the line.

The Erne county brought a huge amount of people and a carnival atmosphere to the Ulster Final last year, and it will be the same again today. 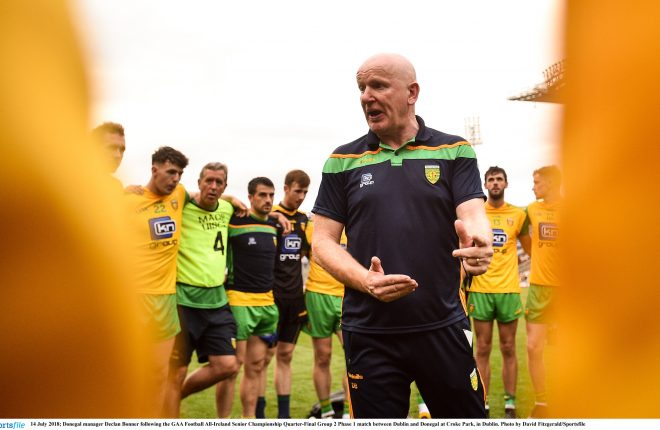 Fermanagh football is going through a good period, and their fans will get out and back them this weekend.

It’s not a long journey for our supporters to make, and I hope they come out in strong numbers, wearing their colours.

It’s going to be a tough 70 minutes in Enniskillen and we will need all the backing we can get if we are to prevail.

There will be good value for money for supporters today in Brewster as the Donegal Under 20 team are in action in the curtain-raiser.

It’s a great opportunity for Gary McDaid’s side to get to play in front of a big crowd (throw-in 12pm).

It will set them up nicely for the championship campaign, especially as they will take on Fermanagh in Brewster in late June.

The Under 20s had a great win over Roscommon in their last outing, and they will be looking for another good test this week.

They should get it as well, as Tyrone usually have good underage teams, and these sides could meet again later in the year.

Hopefully people will get in early and cheer on the Under 20s, and it would be great if they could get the day off to a positive start.

Well done to Gary Duffy, his backroom team, and the Donegal minor side on reaching the Ulster Championship semi-final.

They had a fine win over Cavan last week and any day you go to Breffni Park and win by eight points is a good day.

The minors suffered a disappointing defeat to Tyrone in their first game but they have come back strongly since then.

They have now recorded good wins over Cavan and Armagh and appear to be back on track again.

They have a bit of momentum built up now, and it’s probably a pity that they will have to wait another four weeks before they play their next match.

That’s not ideal but at least they are still in training, and I think in Donegal, Tyrone, Monaghan, and Derry, the four best teams are left in the competition.

Monaghan won the Ulster Minor title last year, and they will be difficult opponents, but Donegal have a good team and they will be in with a strong chance of reaching the provincial decider.