This Sunday sees the 23rd staging of the North West Charity 10K Race and Walk in Letterkenny. The high-profile event was established in 1997 after the demise of the Rockhill 10K in 1996. Anne Condon took on the role of administrator the first year. 23 years on, she’s still there.

“The Rockhill 10k finished up in 1996 and there was a public meeting. At that meeting, the Letterkenny Chamber President, Patsy Kilgannon from AIB committed the chamber to look after the administration of the event. And that’s been me since,” she recalls.

“I went along to the first meeting in the Mount Errigal Hotel and didn’t know anybody as I wasn’t involved in the sports world. I remember Herbie McDaid, Charlie Kelly and Teresa McDaid being there. Norman Spratt, Neily McDaid and Gerard McGinley were also there at the start and are still involved,” she adds.

“The bank was fascinated that the four original signatures on the account that sign the cheques are all still involved so many years on.”

“That amount will increase after this weekend and the number of groups that have benefited will rise to 35. A number of groups have been a benefiting charity more than once,” she points out. Anne has seen first hand the constant level of good will the North West 10K has received since it was first set up.

“The same sponsors are there, year in and year out. Businesses have been extremely generous to the North West 10K in terms of their time, their money and their expertise. The number of businesses coming on board as sponsors is still growing which is great.”

In the early days, there was a huge emphasis on the sponsorship cards. That has changed a lot in recent years, according to the administrator.

“I remember in the past there would be a huge bag-full of sponsorship cards on the day and we’d pull one of them out for a prize. The amount of cards now is very small. People either enter online or come along and enter on the day and give a few extra euro for the charities,” she says.

“When the North West 10K first started, there was nowhere near the same number of charity races or events. These days there’s the Relay For Life and the Darkness Into Light events for Pietta House. But there’s space for everyone which is good, too.”

While the money raised for the charities is much needed and makes a huge difference to the benefiting groups, Anne says the exposure they get through their involvement with the North West 10K is equally as important.

“It really helps their profile. They get mentioned on Highland Radio, in the local newspapers and of course on social media. The pre-event fundraisers also help. There have been tractor runs, charity swims, raffles, dances, coffee mornings and a host of events organised by the chosen charities which all help the cause. If those pre-events weren’t happening, there certainly wouldn’t be as much money to present to the charities every year – they are a vital part of the whole ethos of the North West 10K.”

One of the main reasons the North West has stood the test of time and continues to be so successful, Anne believes, is the structure and skill set of the organising committee.

“Everyone has a specific role and no one steps on anyone else’s toes. Herbie is race director, I look after administration, Neil Martin is chairman and one of his duties is to sort the sponsors, Neily McDaid takes charge of the stewards, Paddy Bond looks after the signs and Bernie Brennan is in charge of the goody bags. The committee hasn’t changed all that much over the years. Grace Boyle, James Boyle, Patsy Doherty and Bridgeen Doherty all played important roles during their many years being involved.”

Anne says she’s got to know so many people through her association with the North West 10K.

“The number of people who know me through the North West 10K is unbelievable,” she says.

“It’s a great thing to be involved in.” 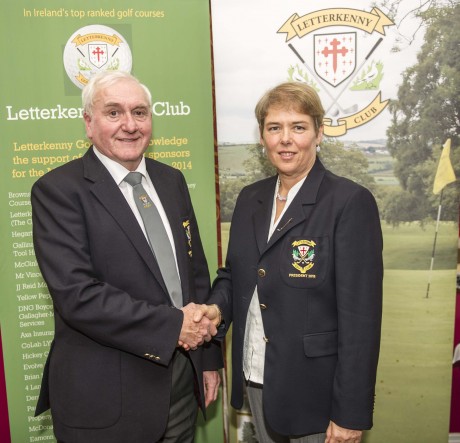 Once again, Letterkenny Golf Club have made an historical entry into their history books.