Almost three decades after competing in the FBD Milk Rás for the first time, Ian McLaughlin was inducted as Letterkenny’s Cycling Club’s first honorary president at a function in Arena7 on Friday night.

It’s 14 years since a workplace accident in which Ian sustained a severe spinal injury.

“It was a short fall, but it had huge consequences,” comments Ian, who has been confined to a wheelchair since.

At that time, himself and Anne Marie had moved into their new home at Coolboy a couple of years before with their three children then aged 10, 8 and 4.

So much has changed for Ian since March 22nd, 2005. But some things that have remained constant – his resolve, his sense of humour, his humility and his love of cycling.

These days when he’s not watching cycling or reading about cycling, he’s a regular in the back of the service van which accompanies members of Letterkenny Cycling Club on their group spins.

Ian’s brother, Ciaran, drives the van. Ian’s daughter, Katie, and Ciaran’s daughter, Ella, pitch themselves further along the route where they set up refreshment stops with tea, coffee fig rolls and bananas.

Anne Marie has taken to the two wheels in recent years and enjoys the banter.

“We meet so many people.”

“It’s nice for Ian to be honoured by people who weren’t cycling when Ian was cycling,” Anne Marie adds.

Looking back on his early days in the saddle, Ian says they were different times.

“You were looked upon as a bit weird if you were a cyclist back then,” Ian comments.

“Myself and Mickey Russell who cycled a lot together were also members of Letterkenny Boxing Club. We had to shave our legs when we going to race and that was something you certainly weren’t going to shout about,” he recalls with a laugh.

Way back when, Ian spent hours upon hours on his bike. If he wasn’t training, he was racing.

“There were a few young lads from around the town cycling in those days. It’s great now to be involved with Letterkenny Cycling Club – I go out in the van and watch away. I also like being involved in the charity cycles.”

Ian was at the top of his game at the turn of the eighties. He joined Tirconaill Wheelers CC which was set up by John Browne from Ramelton with a number of others. Among the local riders who joined were Mark Ponsonby, Martin McDevitt, Mickey Russell, Gerard Callaghan, Jason McHugh, Jason Black, Billy Black (RIP), Tony Coyle, Kevin McCrossan, Joe Birney, Martin Birney, John Watson and Tommy Piper.

Ian got help and guidance from many good people. But it was the late Cathal O’Raghallaigh, who was to have the most influence on the carpenter. A native of Dublin, Cathal had relocated to Killybegs where he worked as an accountant and formed the Four Masters CC around the same time. A stage winner in the Rás, Cathal was third overall in 1958 and won the National Road Race Championship the same year.

“Cathal was very good to us,” he says.

“We’d head out on our bikes for miles. Then I joined the cycling club in Lifford. Robert McCollum from Manor was another man who encouraged me when I was starting out. The reality was very few were cycling then. If you needed anything for your bike, Denis Boyce in Cranford was the man. He had all the stuff.”

Getting to races was expensive, but Cathal always made sure Ian, who had made the move to Four Masters CC, was always looked after.

“We were at races all over the North. We were out on Saturday and Sunday. We were in Dublin, Coleraine, Newry and raced a lot in Derry. Cathal always wanted us fresh to compete in quality races around the country. We competed in The Tour of Ulster, Newry 3 Day, The Mid Ulster Grand Prix and the Tour of the Mournes.”

The Rás in 1991 was the pinnacle for Ian. The course took the riders up the challenging Glengesh Pass during one of the eleven stages of the event held over eight days.

“It was very, very hard,” he remembers.

“We were really up against the elite with teams from Australia and France. As the race went on I got better.” 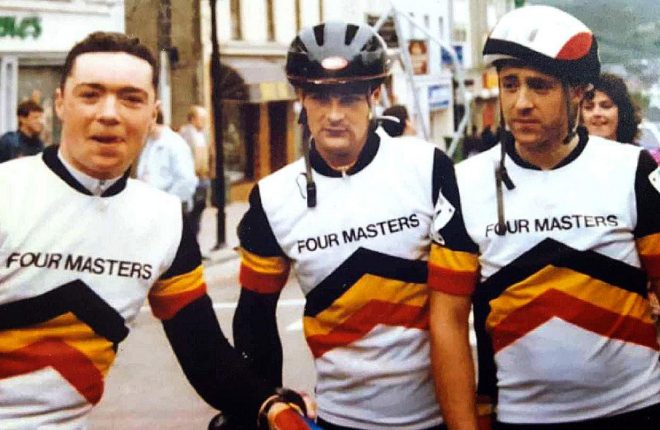 “Martin McDevitt was our masseuse and our mechanic. Martin was great, he’d fix our bikes and change our tyres.”

The last day of the Rás started with a time trial in the morning.

“Because we were well down in general classification, we were first away. I met Kevin Kimmage, who won the Rás, after I was done. He asked me what it was like out there. I just said to him go hard out and hard back. He met me after and hit me a friendly clip on the back of the head. He actually broke the Irish record that day with something like 19 minutes. I was just delighted because I had beaten Philip Cassidy.”

The crit around the Phoenix Park in the afternoon brought the event to an end.

“That was just hanging on for dear life. I was delighted to get over the line and get finished,” he adds.

Ian went back for a second Rás in 1993, and while he enjoyed it, his first two years earlier remains the highlight. One of the town’s finest sportsmen, Ian McLaughlin knew what it took to compete, and hadn’t a problem getting stuck in and sucking it up at question time.

When the big races come around later in the year, Ian will once again be glued to the television screen.

“I still love watching the cycling. I loved watching when Philip Deignan was competing – I don’t think I’ll have the same interest now. I loved seeing Philip doing well.”

At Friday night’s function, Mickey Russell and Gerard Callaghan were among the gathering of tried and trusted.

“Myself and Mickey were boxing together since we were 10 years of age. Later on the bikes, we used to meet Gerard, who was a bit younger and we’d convince him to come with us. He’d turn and come with us. I’d say to him ‘sit on my wheel, you’ll be grand’. But he’d end up cursing me before we got home,” he recalls with the giddiest of smiles.

“I really enjoyed those times.”