Advertisement
HomeSportSoccerStoking it up with The Potters in the Championship
Advertisement

While he’s enjoying his role as first team coach at Stoke City, where he was a fan favourite for six years, Rory Delap makes no secret that he was always happiest when he was playing.
For 21 years, he plied his trade as a professional footballer, lining out for seven professional clubs and making over 500 appearances. The 42-year-old was also capped 11 times for the Republic of Ireland.
Famous for his long throw-in which was the sword many opposing teams fell on – he had the ability to hurl the ball up to 40 metres at a speed of close of 37 miles per hour – the former schools’ javelin champion also scored 33 goals in a most eventful career. The best of these was surely his dramatic bicycle kick for Southampton in their 1-0 win over Spurs at St Mary’s on March 27, 2004.
A son of Letterkenny native, John Delap, Rory keeps in regular contact with his uncles Paddy, Brendan and Anthony and visits the Cathedral Town at least once every year.
Rory joined the youth academy at Carlisle United as a teenager in 1992. His path took him to Derby County, Southampton, Sunderland, Stoke City and Barnsley before he hung up the playing boots in December, 2013 as a Burton Albion player.
“There were a lot of pre-seasons,” he declares as he ponders on it all.
“During our first week when we were part of the YTS (Youth Training Scheme) at Carlisle, we were introduced to the PFA and they sorted our pension out. It’s kind of daunting, really. You hear horror stories of players being injured at 16 and 17. We were told that the best kids will play until they’re 30, and some will be lucky enough to go on until they’re 35. Things like that aren’t meant to scare you, but they obviously do.
“21 years of playing wasn’t easy at times. No matter how successful you are or what type of career you have, there are massive ups and downs. The game changed massively as my career went along.”
Debuts for club and country, playing at Wembley for the first time with Carlisle United when winning the Auto Windscreen Shield Final after a 4-3 penalty shoot-out with Colchester United and helping Southampton reach the FA Cup Final in 2003 are among the high points as he runs the reflective rule over his two decades as a pro.
“Knowing I was going to miss that FA Cup final was one of the lowest points,” he recalls.
He ruptured ankle ligaments when playing for Southampton reserves while trying to get more game time under the belt before the meeting with Arsenal at the Millennium Stadium. That the Gunners won 1-0 merely compounded the former Republic of Ireland international midfielder’s misery.
He became Southampton’s record signing when he moved from Derby County in 2001 on a £4 million switch.
The promotion to the Premiership with Stoke in 2008 will always be the pinnacle.
“A lot of the team were approaching the end of their careers, so it was last chance saloon for a lot of us.”
Stoke finished runners-up, two points behind league winners and Midland rivals, West Bromwich Albion, and returned to the top flight after a 23 year absence.
27 years on from his first days at Carlisle, Rory’s job as first team coach at Stoke City has given him a whole new insight into the game.
“While I know it’s the same sport, it’s also completely different,” he says.
“The game has changed massively. It was a big social thing back then. Success of teams was built on what happened off the pitch really, rather than on it. You built relationships, friendships and trust on nights out. But that has completely flipped around since the late 90s.”
“I managed to sign for Derby in the Premiership and that was a shock to the system at first. I was looking at some of these players and physically I was able to compete, but technically and tactically I was probably a good bit behind them. I had to dedicate a lot of my time to watching and studying other people playing, as well as watching myself playing on video,” he explains.
Rory was signed by Derby County boss, Jim Smith, from Carlisle United in 1998 and made his debut in the Premiership in a scoreless draw against Everton at Goodison Park in front of a crowd of 39,206.
“My second game was against Manchester United at Old Trafford. We lost 2-0 and I gave away a penalty. That was a crash back down to earth. My uncle Paddy had a Man United scarf on – I think he was the only one smiling that day,” he adds with a laugh.
He had a few career options when he stopped playing at the end of 2013, one being a pundit for Sky Sports.
“While I enjoyed talking about football, I was travelling a couple of hours to get there and hanging around for a bit. Even when I was getting the make-up on, I felt this wasn’t really me.” 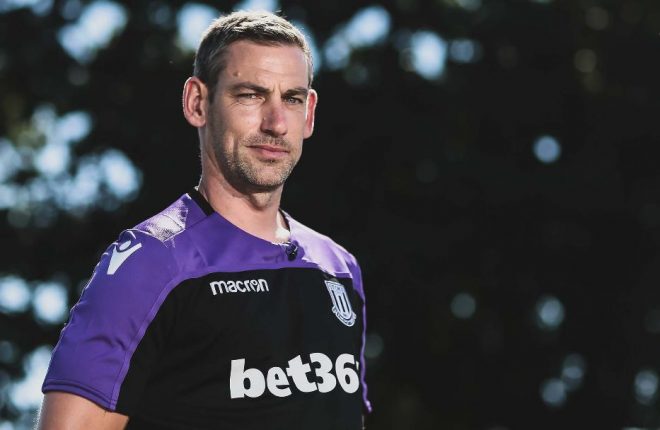 His next move took him back to Derby County where he managed the under-14 side on a part-time basis. He knew the moment he took control of the first training session that coaching was for him.
“I felt at home again and it’s the next best thing to playing for me,” he comments.
He got his coaching qualifications, was appointed under-18 coach in 2015 and a year later he took charge of the club’s under-21s.
In June of last year, he was appointed first team coach at Stoke City to Gary Rowett with whom he had worked closely with at Derby County. Four weeks ago, Rowett’s contract was terminated and Rory was placed in charge of the first team for a short period before the appointment of new boss, Nathan Jones.
“It’s nice to be back at Stoke,” Rory says.
“There are a few players from my time before still here. I think I’m a bit closer to the players as a coach because a manager would be very different. As a coach you’ve got to strike up a relationship with the lads. I’m just delighted to get the opportunity.”
Making sure the younger players are comfortable to make the move up through the ranks is one of Rory’s briefs, as is keeping the players motivated and managing their expectations.
“You’ve got to lend an ear and listen to what they say, while you also have to let them know if they are too high above their station,” he comments.
With the transfer window closing this week, it’s been a busy time for Rory and management at Stoke City who currently occupy 15th spot in the Championship.
“If you get one or two [deals] wrong, that can make or break the season. You see it year in and year out. Sometimes players come in and fit in straight away. In the January window players are expected to come in and perform right away. There’s no time to get to know the lads, you’ve got to do that when you’re playing games. It’s an important time of the season for us. You hope that the players coming in will strengthen your squad.”
Rory regards the Championship as one of the toughest leagues in Europe.
“There’s not a lot of difference between top and bottom and anyone can beat anyone this season. As you can see with Hull, they put eight or nine performances together and went from near the bottom to the play-off places. We’re not discounting anything this season. We have a very good squad but I think the Championship came as a bit of a shock to them. It’s all about progress now and we know we need to improve. Everyone at the club is desperate for Stoke to do well.”
One Delap might have stepped off the playing pitches, but there’s another, younger Delap currently making waves.
Rory’s son, Liam, who is with Derby County, won the golden boot award when notching four goals for the England under-16s in an international tournament in Turkey recently.
“He’s doing alright. He’s a good lad,” says Rory.
“He works his socks off. He suffered a bad injury – he had a tress fracture in his back 18 months ago so he’s seen that side from an early age. He worked religiously to make sure he came back from that stronger.
“He’s enjoying himself and that’s all I’m bothered about. I’m proud to watch him.”
Just like John Delap was when Rory first broke on to the scene all those pre-seasons ago.