LETTERKENNY singer Mick Blake is attracting praise from survivors of Ireland’s mother and baby homes for tackling the thorny issue in his new single.

The Fallacies of Men is written from the point of view of an ageing priest who, on nearing his death bed, questions whether he could have done more to protect those abused in institutions such as the Magdalene Laundries.

Since being released, the song has become something of an unofficial anthem for those who lived through the laundries and similar institutions.

“Following the Pope’s visit earlier this year I decided that I wanted to document what happened in Ireland, in the Magdalene Laundries and other institutions but I wanted to do it without going into a rant,” said Mick following the release of The Fallacies of Men.

“So I came up with the idea of writing a song from the point of view of an elderly priest who is looking back on his life and asking if it was really what God intended.”

Hard hitting and unapologetic, Fallacies is just the latest in a long line of protest-style songs written by the Ard O’Donnell man, who is now living in Leitrim.

Other issues he has tackled through song in the past include the disappearance of Mary Boyle, the situation in Palestine and political corruption in Ireland in the song Oblivious, recently recorded by Christy Moore. The two men have forged a friendship in recent years and performed together in Dublin’s Liberty Hall on Easter Saturday ahead of the marking of the 100th anniversary of the 1916 Rising. 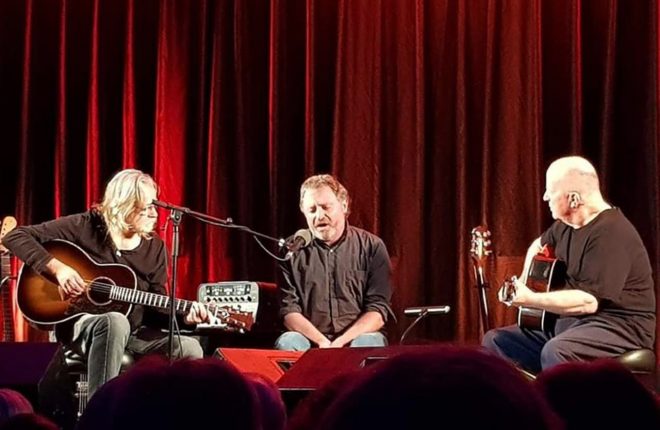 “I write a lot of songs about modern Ireland and about its recent history. I like the idea of songs being historical documents and here in Ireland you have so many songs written about each era of our history. I like the idea of being part of that and about putting our history to music. But I also try not to give my point of view and instead give facts and then let people make up their own minds. I’m telling a story rather than giving my opinion.”

One opinion the singer/songwriter is not shy about giving though is on whether Ireland should boycott next year’s Eurovision Song Contest.
Since singer Netta won the competition in May, politicians, presenters, entertainers and former winners have added their support to calls for Ireland to stay away from the Israel-hosted show in 2019. Mick Blake said he would be in favour of swerving next year’s Eurovision in protest at Israel’s treatment of Palestine.

“A few years ago I wrote a song about what is happening in Gaza and it is a situation I follow. I’m just down the road from singer and former Eurovision winner Charlie McGettigan too and he would feel very strongly about it.

“There has been this growing call among musicians and personally I would be very much in favour of boycotting the competition next year,” said Mick.

As to whether he expects any criticism from the church for his representation of the clergy in The Fallacies of Men, Mick Blake said he doubts it. Not “particularly religious” himself, the singer revealed that since the song’s release, he has had mainly positive feedback from abuse survivors as well as from committed churchgoers.

“I don’t think there is anything in it that would be offensive. A lot of time went into the angle I wanted to come from so maybe people feel sorry for the main character and the fact that he took the church’s dogma as the only way to do things. Now looking back on his life he is left to ponder whether he should have considered his own position rather than just take it from the church.”

The Fallacies of Men is available to listen here: https://www.youtube.com/watch?v=NdAB79vr05g&t=39s. You can also catch up with Mick on his website, www.mickblakemusic.com.