THE Donegal News is proud to be the official media partner of Letterkenny Trad Week 2019, which is presented by the Regional Cultural Centre and An Grianán Theatre.

The week-long festival – January 19 to 27 – features a great mixture of new talent on the rise, stalwarts of Irish and other Celtic traditional music, as well as a Grammy-nominated bluegrass band from the United States.

Kicking off the fourth annual festival on Saturday, January 19, will be an exciting collaboration presented by Music Network – Muireann Nic Amhlaoibh, Siobhan Miller, Damien Mullane and Anna Massie in the RCC.

The ethereal voice of award-winning Scottish songstress Siobhan Miller on vocals and the honeyed tones of the recent winner of the RTÉ Folk Awards’ ‘Best Traditional Folk Track of the Year’, Muireann Nic Amhlaoibh on vocals/flute, will be complemented by gifted accordionist Damien Mullane and fleet-fingered guitarist and banjo player Anna Massie.

On Tuesday, January 22 the RCC will host a double delight of duos in husband and wife Zoë Conway and John McIntyre, as well as Seamus McGuire and John Lee. 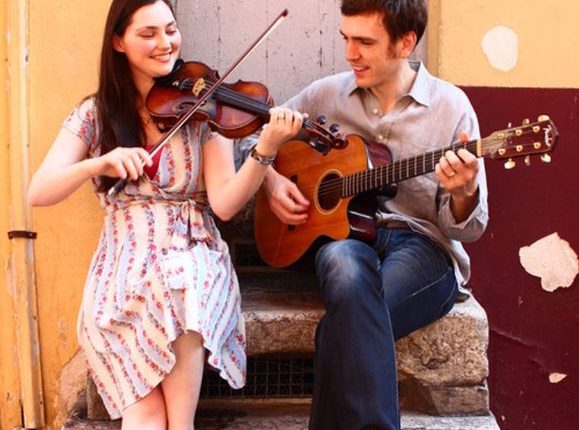 Zoe Conway and John McIntyre who will be centre stage on January 22.

Together, Zoë and John have been described as simply one of the best folk duos on the planet and audiences in Ireland and beyond keep coming back for more.

Well known Letterkenny-based paediatric consultant Dr Seamus McGuire is of Ireland’s most versatile fiddle-players. He will be joined by one of the finest exponents of the vibrant Leitrim style of flute-playing, John Lee.

There is huge excitement around the artist taking to the stage in the RCC on Wednesday, January 23. A former electrician who decided to become a musician after seeing Christy Moore perform on Irish TV, Dublin-born traditional singer and bouzouki player Daoirí Farrell has been described by some of the biggest names in Irish folk music and one of most important singers to come out of Ireland in recent years.

The high calibre of music continues on Thursday when Mike McGoldrick and Dezi Donnelly perform together in the RCC. Between them they have been members of Toss the Feathers, Stockton’s Wing, Capercaillie, Flook and Lunasa and have performed with Mark Knopfler, Eddi Reader, Sharon Shannon and Kate Rusby to name just a few.

On Friday night the RCC is delighted to welcome back Special Consensus who have appeared in Letterkenny on a number of occasions and are sure to attract a great crowd. Special Consensus is a superb bluegrass outfit in a classic vein but with more than enough modern sensibilities to attract every ear in this now pleasantly fractionating genre. The vocals are flawless, the playing as shiny as a newly minted penny, and music like this is the reason people come to love bluegrass.

Bringing the 2019 Letterkenny Trad Week to a close, An Grianán Theatre will host world famous group Altan on Sunday, January 27.

Founded by Mairéad Ní Mhaonaigh and her late husband Frankie Kennedy, the group has been bringing Irish traditional music and song to fans around the world for over three decades. In May, 2018 Donegal County Council honoured the group with a civic reception at the County House in Lifford, celebrating the group’s achievements bringing Donegal music to the worldwide masses over the years.

SPECIAL OFFER
In celebration organisers are delighted offer a special ‘Early Bird’ package, an ideal stocking filler for any trad music fan this Christmas, which includes all six concerts for only €75. The Letterkenny Trad Week ‘Early Bird’ package will only be available until Friday, December 21.

All concerts begin at 8pm. For ticket bookings or further information go to www.regionalculturalcentre.com