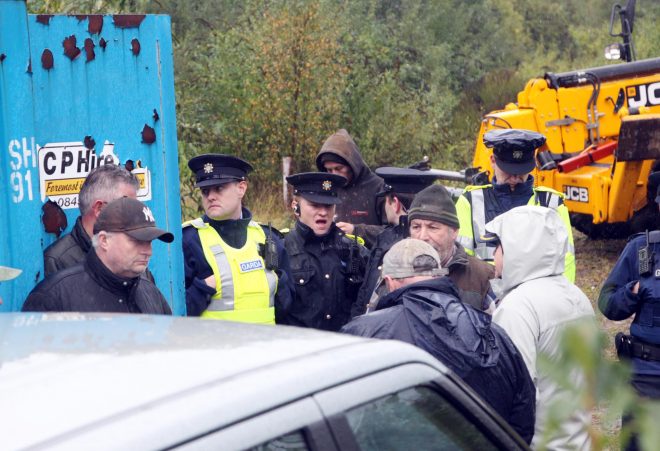 Supporters of Brendan Gildea and Garda at the disputed site in Ardarawer, Kiltoy.

A tense stand-off between An Garda Síochána and members of a group
that helps people fight against repossessions and receiverships has
ended peacefully in Letterkenny.
Shortly after 6.30am on Friday, concrete bollards were removed
allowing machinery to gain access to a disputed four-acre site at
Ardarawer, Kiltoy.
Within minutes, members of the Common Law Society (formerly Helping
Hands) started to arrive on the scene where they found six uniformed
Gardai blocking the entrance to the site.
Shortly before 11am the machinery was taken back off the site and the
bollards and fencing were restored with both parties agreeing that no
one would enter the site again until the matter, which is currently
before the High Court, is resolved.
Last year, planning permission was granted to Creeslough-based
building contractor Mr Charles Roarty of CR Renaissance Properties
Limited and Roarty Developments Limited, to develop 46 units made up
of three-storey duplex and semi-detached dwelling. houses on the site
which is close to Meadow Hill.
However, well known local Letterkenny contractor Mr Brendan Gildea has
lodged an adverse possession claim (sometimes described as squatter’s
rights) in the High Court.
“Until such a time as that issue is sorted we’ll be insisting that the
site has to stay the same as it is,” Mr Michael McGee explained.
Speaking to the Donegal News at the entrance to the site on Friday
morning Mr McGee, who describes himself as being a “man aiding and
assisting his fellow man”, claimed that High Court papers handed to Mr
Gildea last week were nothing more than ‘pieces of paper’.
The spokesman for the Common Law Society, which claims to be educating
the people to protect themselves, said that Mr Gildea was within his
rights to protect his property.
“These people have illegally entered a site that Brendan Gildea has
had possession of for the past twenty-nine years. He has an adverse
possession claim in with the High Court and Land Registry and until
such times as that is sorted this site has to stay the way it is,” Mr
McGee said.
“They maintain that they have a High Court order but what they have is
a piece of paper – nothing more. A High Court order has to have one of
two things. It must have stamp duty on its face and has to be signed
by the Judge and Registrar. This one has no stamp duty on it and only
has the name of the registrar on it. There is another way – have stamp
duty on its face and signed by either the judge or registrar but it
then has to have the High Court seal on the document. This document we
have here is toilet paper,” he said, waving three sheets of paper in
the air.
“I’ve explained all this to the Gardai and said that we’re here to
help our neighbour and protect his property. There’s no violence here
– we abhor violence,” he added.
“If I broke into someone’s house at 6.30am this morning I would expect
to be arrested. There was a fence up here and concrete bollards too
and they’ve been moved. I’ve asked the Gardai to arrest them but
they’ve refused,” Mr McGee said.
“I went to watch the film Black 47 the other night and nothing has
changed. Eighteen months ago at The Kube (another Letterkenny building
that was developed by Brendan Gildea) there were eighty Guards wearing
riot gear and carrying sub machine guns and yet we’re now back in the
Kube.
“The law is the law is the law but unfortunately it looks like there’s
no law in this country,” he blasted.
According to the High Court papers the matter came before Mr Justice
Barniville on July 30.
The plaintiffs were listed as CR Renaissance Properties Limited and
Roarty Developments Limited with Brendan Gildea and Noel Gildea the
named defendants.
It ordered the defendants remove the container placed on Mr Roarty’s
lands in Kiltoy as well as removing any obstacles blocking access to
the site.
It also ordered that the defendants, pending the trial of the action
or further order in the meantime,  do not access the site or trespass
on Mr Roarty’s lands.
Mr Brendan Gildea, who was also on site on Friday morning, declined to
comment.
When contacted later in the day, Mr Charles Roarty of CR Renaissance
Properties Limited said that he would “abide by the laws of the land”.