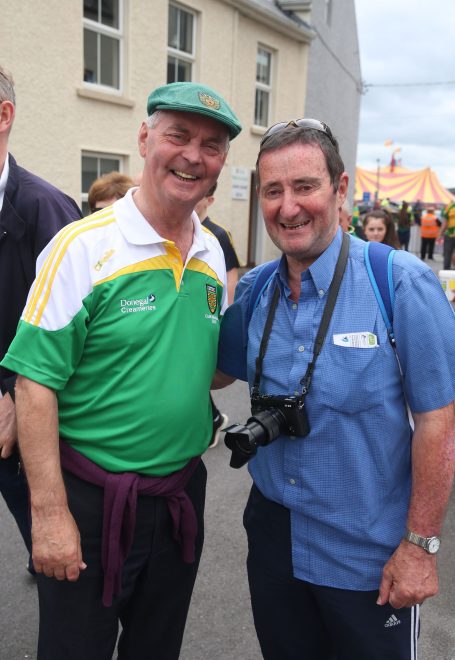 WHEN well known Donegal sports photographer Michael ‘Jack’ O’Donnell first started to feel dizzy two years ago his doctor thought it was vertigo and prescribed medication to deal with the symptoms.
“I had a dull pain at the base of my neck. I would get blurred vision and sometimes, when I would get up to walk, it felt that my legs wanted to cave in. I would then get violently sick and lie down for an hour but once I would get back up I would feel right as rain again,” he recalled.
The Glenties man went to see Dr Evelyn Ward who immediately referred him to a neurologist.
“She saw something in the back of my eye she was not happy about and, only for her, I would probably be dead now,” he said.
“She sent me to Letterkenny for an eye scan, from there I had an MRI and within a couple of days I was in the Beaumont Hospital being operated on for a brain tumour. One Sunday I was sitting on my stool covering a McKenna Cup match against Queens in MacCumhaill Park and the following Friday I was in Beaumont. It all happened that quickly,” he explained.
It’s Tuesday evening and Michael ‘Jack’ is holding court in the Highlands Hotel not too far from where he was born in Ard Patrick. He had his operation on January 20, 2017 and ever since he has an MRI every three months. His latest MRI, Thursday last week, was clear.
Since his brain tumour, Michael Jack has become a little bit more appreciative of life and his family and friends who helped him negotiate a path through his illness.
“I must admit I was shocked when I was diagnosed with a brain tumour. It was behind the right eye and it was cancerous. It can be anything from Grade 1 to Grade 4. You don’t want a four and I had a three so it was serious,” he said.
“Mr Mohsen Javadpour, a brilliant neurosurgeon, took the time to explain what was wrong. He sat down on the bed and told me not to worry. He said that he was in this game a long time and that he would like to think that he was quite good at his job. That put me at ease straight away,” he added.
After a six-hour surgery, he spent a night in ICU.
“My family were very supportive of me. It was a tough time for them, cancer affects the whole family but I must admit they were brilliant,” he said.

A long road to recovery
“Last year was quite traumatic while I underwent radiation and chemo and had check-ups every three months. Each time I went for an MRI I was terrified of the outcome and would wonder if the cancer had returned.”
Michael Jack decided that he wasn’t going to Google in a bid to find out more about his diagnosis.
“I realised that there were only two people that could help me at that point – the man above and my surgeon, Mr Javadpour. I got strength from somewhere. I wouldn’t be one for going to the chapel every day of the week but I’ve my own wee bit of faith. I had a chat with my dad and a few other friends that are dead and it worked for me.
“There is great hope for all cancer survivors, by staying positive and battling hard during the treatment. I fought it all the way, and tried not to worry about it,” he said.
The thing that scared Michael the most was radiation – explaining that both the room and mask are scary.
“I get a bit claustrophobic and the radiation mask didn’t help matters.”
He adds: “I had sixty batches of chemo altogether while I had forty rounds of radiation during my eight weeks in St Luke’s. I’m a very lucky man,” he said.
The eldest in a family of nine – Michael will celebrate his 65th birthday in November – he has four brothers Dessie (Ardara), John (Killybegs), Gerard and Brendan (both Glenties) and four sisters, Ita (Dublin), Mary (Letterkenny), Teresa (Dublin) and Siobhan (New York).
“They were all great as was my partner Bernie Keeney. Bernie came up to see me every weekend and she was like a rock for me. She couldn’t have done enough and continues to be behind me all the way,” he said.
Michael also paid tribute to the many people who took time to call in to see him during his three-month hospital stay in Dublin, initially in the Beaumont and then St Luke’s, and those who took the time to write letters and send messages.
“There were some funny moments. I was in the isolation ward at one point – my immune system was down – and no-one was supposed to come into see me without first getting clearance from the nurse. It was written up on the door in big red writing but this particular day John Kelly came into see me and then Leonard McGill and Seamus Given, two mates from town, landed in a few minutes later. There were the three of them wearing gloves, gowns and hats for infection purposes. Ten minutes later there was a knock on the door and in comes Cathal Molloy and big Jamsie O’Donnell and the noise was savage. All of a sudden Jamsie stood back with his gloves in the air and said: ‘Right, I’ve got to operate. Where am I going to start Jack.’ It was like a comedy show,” he laughed.
“There were bucks who I might have fell out with due to the football who sent me the nicest text messages. Jim (McGuinness) rang me once or twice while Michael Murphy (All-Ireland winning captain) was among those who visited,” he said.
Michael reached his lowest ebb after being unable to eat for five full days while he was in the isolation ward.
“I told the doctors that I couldn’t stick it for another week and wanted to get home. Two young doctors explained that my immune system was too low to be let home as I would be left wide open to infection but I argued that I could only get better if I was allowed home to my own bed and to eat my own food.
“That was on the Wednesday and by the Friday they told me they would try to get me home the following week and they were true to their word. Thankfully, I haven’t looked back since. The weather was starting to improve and I got out into the garden and got back playing with the kids,” he said.
Having photographed the 1992 and 2012 All-Ireland final wins, Michael Jack was back in Clones this summer to capture Donegal winning the 2018 Ulster title.
“While I enjoyed and appreciated both ‘92 and ‘12 I really, really enjoyed this year’s Ulster triumph as at one stage I didn’t think I would live to see it,” he said.
Michael still attends Naomh Conaill and Donegal matches when possible but he no longer works as a sports photographer.
“I just wouldn’t have the energy any more,” he said.
The Glenties native has captured images from thousands of games for local and national publications, including the Donegal News, since he first sent in pictures – on spec – to the Donegal Democrat from a Naomh Conaill versus Ardara game back in 1981. “It was like winning the lottery when I saw those three images used in the paper,” he smiled.
You get the feeling that Michael won a different, and more important, lottery in more recent times.
“Too true. You think you’re bullet-proof until something like this happens. It really knocks you back but I’m one of the lucky ones. I’ve been given another chance,” he said. 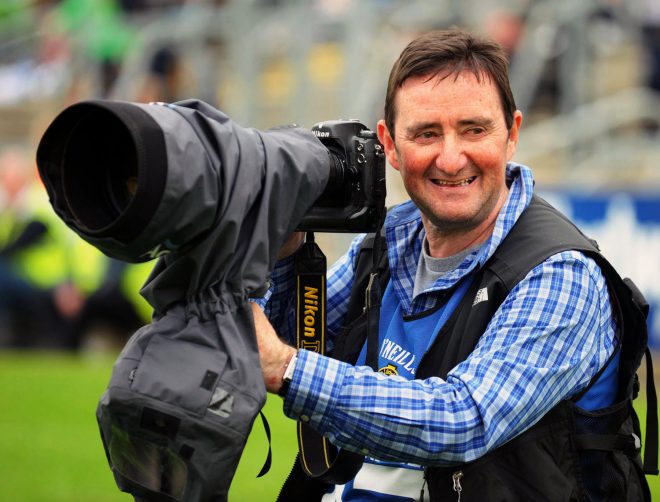 Michael Jack O Donnell, on the sideline at the Ulster final, in 2012, before Donegal went on to win their second All Ireland final.