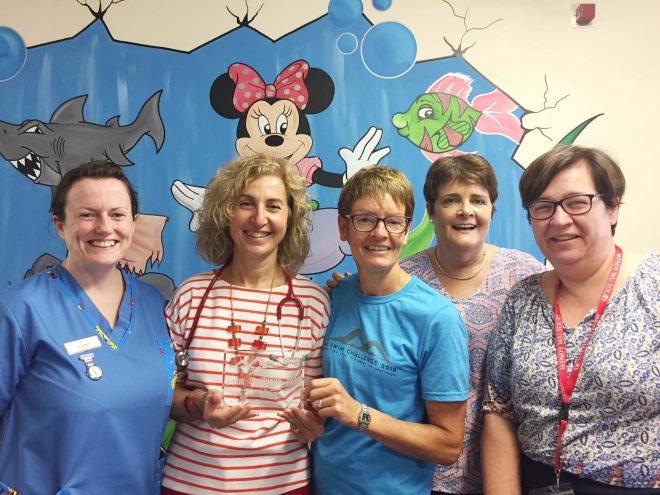 THE Gartan Swim Challenge attracted more than one hundred and fifty swimmers to the shores of Lough Gartan last Saturday morning.
Now in its fourth year, there was a truly international feel to the swim with swimmers from Greece and Germany taking part.
One of those taking to the lake for the first time was Dr Lia Kyranoudi, Paediatric Consultant, who is currently working in Letterkenny University Hospital as locum Consultant.
A native of Kavala, which is the principal seaport of eastern Macedonia, Dr Kyranoudi (56) is a regular swimmer in the warm 25 degree waters in her native seas in Greece. Up until recently she had never worn a wetsuit.
“It was cold but Karen (Crawford) gave me her wetsuit. She also fixed it up so that I could go for a training swim in the lake the week before the race. I swim year round so I thought that I could manage the 1K swim and I enjoyed it so much.
“The people from the swimming club, the organisers and the other swimmers were all great. After the race there was a nice buffet with everyone bringing home-made food with them. Excellent safety cover was provided by people in boats and kayaks. It was perfect,” Dr Kyranoudi said.
Dr Kyranoudi works full-time in Greece. This is her second time to take up a short-term employment contract in Letterkenny.
“I was here for two weeks in January and now I have a six-week contract which runs until the end of August. I have a permanent post in Greece while I also work in private practice for the past twenty-five years. The family hospital I worked in closed recently due to the economical crisis.
“I prefer Ireland as it’s English speaking and it’s in Europe. I like Letterkenny Hospital. I like the staff and nurses and I’m satisfied with the health service in Ireland,” she said.
“Letterkenny is a nice town. The people are very nice and they’ve shown great kindness to help me around Donegal on days off. They have been very helpful,” she added.
Well used swimming in the warm 25 degree waters of Greece, Dr Kyranoudi admitted the drop in temperatures was a bit of a shock to the system.
“It was very cold. We had one practice swim early one Saturday morning prior to the event. It’s a very very busy job in the Children’s Ward and I try to do some swimming in the pool after work,” she said.
The mother of two, who are both medical students in Sofia, hopes to get another opportunity to work in Letterkenny.
“I was in Ireland before. I visited Dublin and Belfast four years ago but this is my first time to work here. I was in Letterkenny for two weeks in January and I’m here for six weeks now. It’s nice,” she said.
Ms Karen Crawford, HSE Training and Development Manager in HR, said that Dr Kyranoudi had adapted well to the colder Donegal waters.
“Up until recently she had never worn a wetsuit. It was her first time in the lake where the water temperature is about 16 degrees. She did very well,” Ms Crawford said.