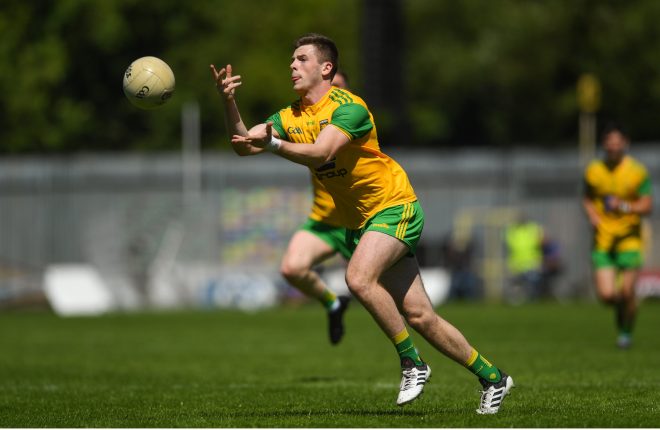 Sunday June 24, 2018 is a date that will live long in the memory of Donegal’s dynamic defender, Eoghan ‘Ban’ Gallagher.

That was the day when Gallagher and his county teammates got their hands on the Anglo Celt Cup for only the ninth time in Donegal’s history.

It was a dream come true for the Killybegs man to play his part in the Ulster Final triumph over Fermanagh and climb the steps of the Gerry Arthurs Stand and hold the Anglo Celt Cup aloft.

Gallagher’s rise to prominence did not come as a surprise to students of the local game, as he excelled at both minor and Under 21 level for Donegal, winning provincial medals at those two grades.

The 22-year-old added a senior medal to the collection against the Erne county, and he produced a man-of-the-match performance in the process after scoring 1-1.

Gallagher was this week revealed as the Donegal News Sports Personality of the Month award winner for June, and he was happy to reflect back on that famous win.

“We made a nervous enough start to the game, but then Ryan (McHugh) and Paddy (McBrearty) set me up for the goal and that seemed to settle us.

“We kicked a few scores after that and I knew we were going to win from there.

“It wasn’t something that was said beforehand, but we knew Fermanagh hadn’t been scoring that much, and they wanted to be in front.

“So it was good for us when they had to do the catching up, and it was comfortable enough in the second half.”

Gallagher is known for his powerful charges out of defence, but he had drifted into an attacking position in the 15th minute of that match.

He gambled that his teammates might create an opportunity and was in the right position to palm home Donegal’s opening goal.

“I was a good bit out when Ryan and Paddy were on the ball, but they are always capable of creating something.

“Ryan has a serious record of scoring goals and I just felt he might try something.

“I decided just to follow it in and see if I could get on the end of it. I couldn’t really miss – he put it on a plate for me.” 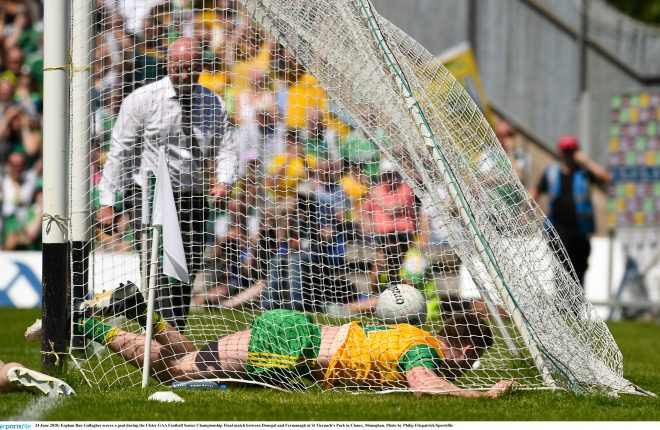 There were wonderful scenes after the match as Donegal supporters flocked onto the pitch.

Gallagher had attended Ulster Finals since he was a boy, but this year, he was one of the star attractions as Declan Bonner’s team came good on a glorious day in St Tiernach’s Park.

“I remember being at a few Ulster Finals in Croke Park when I was younger, when things didn’t go so well.

“But I was there in Clones in 2011 and 2012 and they were great days, and looking down from the stand, you just wanted to be part of that some day.

“We won a minor in 2014 but it was different again. It was a really special day and it was great to see what it meant to Donegal people.”

It was a sweet victory for Donegal, especially as many members of the panel had tasted the pain of defeat on Ulster Final day before.

Gallagher was part of the panel in 2015 when his county lost to Monaghan, and 12 months later, he was a late substitute as Donegal fell to Tyrone by two points.

He said: “The difference in the dressing room after you win one and after you lose one is night and day.

“But I think seeing those two defeats helped me to focus on how well you need to be prepared for those big games.”

Bonner’s men received a rapturous welcome when they returned to the Diamond in Donegal Town that night, and they partied into the wee hours.

“The best part of the whole day for me was when we got off the bus in Donegal Town and walked to the stand.

“There was such a great crowd to see us, and people were all really happy.

“It was actually our first team night out since Christmas because we had so many games in between.

“It was great for the younger players to get the chance to mix with the older lads.”

Donegal’s provincial triumph qualified them for the first ever Super 8s.

They played Dublin, Roscommon, and Tyrone over the space of four weeks, and Gallagher – who spent 10 weeks working for AIB in Ballyshannon during the summer – thoroughly enjoyed the new format.

“I found the Super 8s really, really enjoyable, and I would say most players would say the same thing.

“You had games coming every week or two weeks, so once one was over, you had another one to focus on and get ready for straight away.

“You want to be playing games, and it gave us a great chance to keep the momentum going.

“I think the biggest gap we had was three weeks from the Ulster Final to the first Super 8 game, and that felt quite long.

“Last year, we had four weeks in between games, so I think this was definitely better.”
The Super 8s didn’t quite pass by without drama, as Gallagher picked up an elbow injury in the Roscommon game.

It looked like he would miss the Tyrone game, but recovered in time to play against the Red Hands.

“I was convinced that I would be ok and would make the Tyrone match.

“I remember saying to Dr Kevin Moran in the car on the way back that even if it was broke I wouldn’t be putting a cast on.

“In fairness to Kevin, he was a great help and I wouldn’t have made it without him. He got me straight in for a scan, and we got the results really quickly.

“Then I was with Cathal Ellis, our physio, every day for two weeks just working on the rehab to try and make it.

“As far as I was concerned, I was always going to be available for selection.

“I managed to pass the tests and did a full training session on the Thursday night.

“Declan said if I came through that session that he would pick me on the Sunday, so I just tried to repay his faith in me.”

Despite his lack of training in the run up to the Tyrone game, Gallagher kept dangerman Niall Sludden quiet, and also kicked a point.

However, it wasn’t enough for Donegal on the day, and they were eliminated, while Tyrone have since gone on to reach the All-Ireland Final. 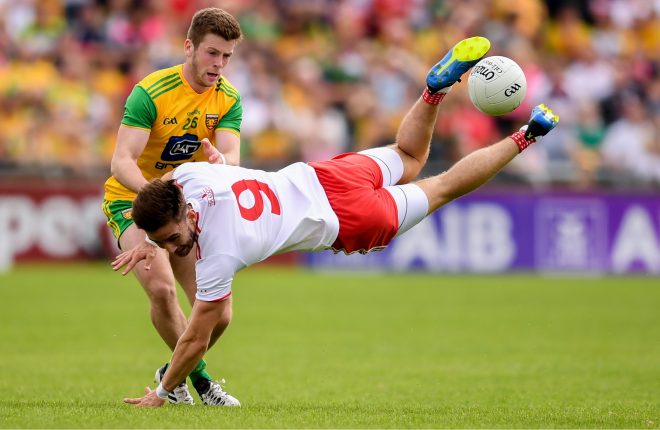 While Gallagher and his teammates can reflect on a positive campaign, it’s still hard to escape the lingering thoughts that they could have done better.

“I suppose you could look at it that it was a good season, but it’s still hugely disappointing.

“If you had said at the start of the year that if we had our final Super 8s match at home, and a win would take you through to the All-Ireland Semi-final, I would have fancied our chances regardless of the opposition.

“Unfortunately it wasn’t to be, and we only scored one point in 15 or 20 minutes of action, and that’s just not good enough at this level.

“Even when we were on top, we just didn’t get enough scores on the board, in the way Tyrone did in the second half.”

While the intercounty season is now at an end, Gallagher still has plenty to play for.

His club Killybegs are in the hunt for promotion to Division 2, and wins over Naomh Ultan and Na Rossa should see them return to the second tier, before the Donegal SFC throws in.

“All the focus is on Killybegs now.

“If we win all our remaining games we will be promoted, and we need to get back to Division 2. We’re in a tough group in the championship but we will worry about that after the league.

“We have a very young team and there are lads that I would never have played with before, and it’s been very enjoyable.” 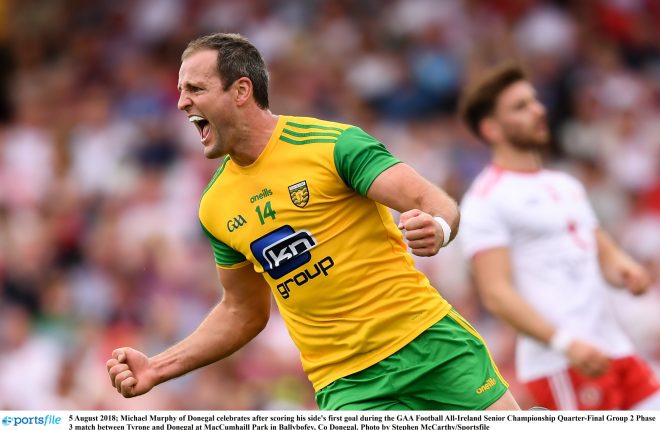 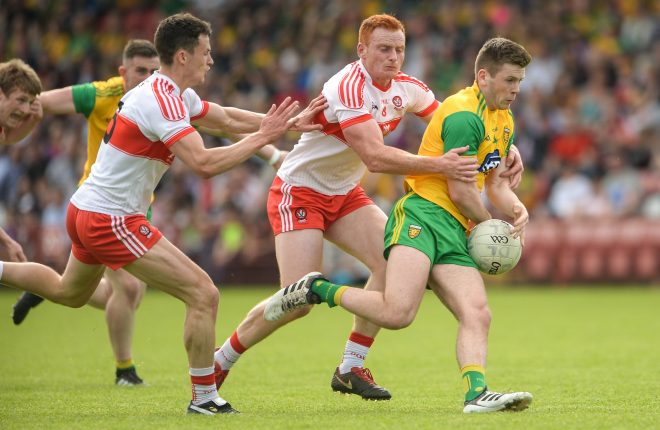