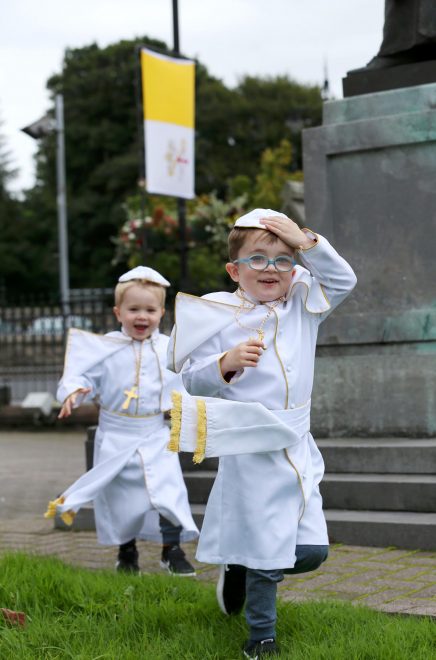 Joshua, 4 and Joseph, 3, McClintock, Drumardagh, Letterkenny pictured at in their Pope Francis costumes ahead of their trip to Knock to see the Holy Father on Sunday morning. Photo: Donna El Assaad

FIVE young Donegal couples will meet Pope Francis at a special event in Dublin’s Pro-Cathedral tomorrow afternoon, Saturday.
They are among thousands of people from across the Raphoe Diocese planning to travel for the ‘Festival of Families’ in Croke Park on Saturday evening. Many, many others will attend events in Knock on Sunday as well as Holy Mass in the Phoenix Park later that day which will be celebrated by Pope Francis.
All 33 parishes from the Diocese of Raphoe will be represented according to Fr Michael McKeever CC VG.
Speaking to the Donegal News yesterday, Thursday, Fr McKeever confirmed that he would be taking a group of thirty parishoners from Churchill to the Phoenix Park on Sunday.
“It’s very hard to put an exact figure on the number of Donegal people planning to attend the World Meeting of Families in Dublin. There is great excitement and it will be a day to remember. Tuesday’s opening ceremony of the World Meeting of Families in St Eunan’s Cathedral was such a joyous occasion,” Fr McKeever said.
Parish secretaries managed to secure tickets for 10 people in each parish throughout the Diocese after they first became available. The Papal Mass at Knock filled in just hours, but tickets for the Phoenix Park Mass on Sunday were easier to come by. Buses will travel from all four corners of Donegal to Dublin for the Papal Mass.
“I’m taking a group from Churchill. I know that there’s three buses leaving Letterkenny and others coming from Stranorlar, Glenties and the Rosses. There will be buses galore, and all parishes will be represented. There has been a huge response from Donegal,” Fr McKeever said.
Fr Kevin Gillespie, newly installed Administrator of St Eunan’s Cathedral, who was one of Pope Francis’ Master of Ceremonies during his time in Rome, is travelling to Knock while Bishop Alan McGuckian, Bishop of Raphoe, will be among the concelebrants in the Phoenix Park.
Donegal parishioners will also be represented at the Papal Mass by the Church of the Irish Martyrs Choir who, under the direction of Milford native Gabrielle Fitzsimons, will be performing alongside Pope Francis in the sanctuary at the Phoenix Park Mass.
Couple
Meanwhile, Pope Frances will meet with couples who were recently married or soon to be married, from all over Ireland, in Dublin’s Pro-Cathedral tomorrow.
Five places were assigned to the Diocese of Raphoe, three couple have been married in recent years with the other two couples to be married later this year or next year. Three of the couples are from Gartan, Newtowncunningham and Ardara.
People from Donegal will also be selected to receive Holy Communion from Pope Frances. Their names have yet to be released.