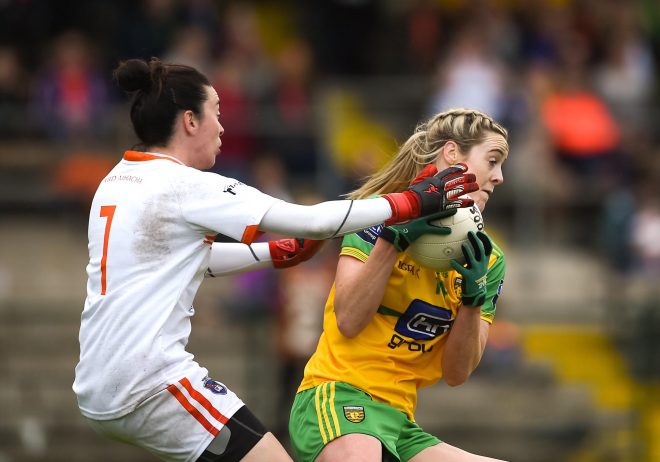 Yvonne Bonner of Donegal in action against Caroline O’Hare of Armagh .

Damian Devaney concedes that this weekend’s TG4 All-Ireland Ladies Football Senior Championship Semi-Final will be a significant step up in quality for his side, as well as representing the biggest fixture of his reign as Donegal joint-manager.
Winners of All-Ireland titles at Junior level in 2003 and Intermediate in 2010, Donegal will have the chance to reach the senior final for the first time when they play Cork in Dr Hyde Park, Roscommon, tomorrow, Saturday, throw-in 2.45pm.
“We said as a group we wanted to achieve something this year. We set goals at the beginning of the year and there’s an opportunity now to create something really special for ourselves as a group,” Devaney said.
Donegal have been in sparkling form this season, beating Armagh to win the Ulster title. They then got the better of both Kerry and Tipperary to top their group before being pushed all the way by Armagh in the quarter-final.
After three successive quarter-final defeats, Devaney and the Donegal players are looking forward to a first senior semi-final.
“It’s probably the biggest ever game in the history of Donegal Ladies GAA. It’s our first time in a senior semi-final which, in itself, is a massive achievement and the girls deserve every credit for what they have managed to do so far this year.
“People say that losing semi-finalists aren’t remembered and it’s up to us to go out there on Saturday and get the job done. There’s three weeks to the final and we’ll take a win whatever way it comes,” Devaney said.
The Rebelettes won 11 of the 12 Brendan Martin Cups on offer between 2005 and 2016 while Dublin were crowned champions last year.
“Over the last fifteen-odd years Cork have been the best team in the country and they are probably back to their best now but we’ve shown that we deserve to be up there too. There’s only four teams left who can win the All-Ireland and one of them is Donegal,” Devaney said.
“It will be a massive test for the girls but it’s one I think that they’re well ready for. So many of the Donegal girls have put an awful lot into their football over long careers and this is their just reward. They’re an experienced bunch of players. They’re all very good footballers and I think we’ll get a performance from them all on Saturday,” he added.
The MacCumhaills club man is joined on the sidelines by joint manager Maxi Curran (Downings) and selectors Johnny McGinley (Glenswilly) and Gary Walsh (Aodh Ruadh) who played in goal for the 1992 All-Ireland winning Donegal team.
“Just to be involved with a group of players like this; the talent that we have fills you with confidence,” he said.
Donegal players will be put through a light session tonight, Friday, ahead of tomorrow’s game. At the time of going to press they had a full panel of players available for selection.
“It’s no longer about the fifteen players who get to start the game. It’s more like twenty or twenty one and it’s up to us to try and get the mix right,” he said.
Finally getting beyond the quarter-finals – after three successive defeats – is something the Donegal management feel will work in their favour this weekend.
“Now that we’ve got rid of that particular stat it will allow the girls to go out and express themselves against Cork. I’m one hundred per cent convinced that we’re more than good enough to get through to the final.
“I don’t think we’ll freeze and I have every confidence in their ability. More importantly though I think that the players have finally realised that they are good enough. They’re among the top four teams in the country,” he said.
Cork edged past Donegal to win last year’s Division one League title while Donegal had too much for Ephie Fitzgerald’s team when they met in the league earlier this year.
“They travelled light that day. They were safe and we had qualified for the semi-final and, therefore, that game wasn’t a fair reflection.
“Last year’s league final would probably be a closer barometer (a game Cork won by a point) but I believe that they’re stronger this year but then again so are we,” he said.
“Ladies football in general is getting better.
“This is my second year involved and I can see a definite increase in the level of preparation from each team while the game is also getting more exposure in the media,” he added.
The All-Ireland semi-final, due to be played last weekend, was moved back a week so as to avoid a clash with Cork’s involvement in the All-Ireland camogie semi-final.
Dual players Libby Coppinger and Hannah Looney, who helped the defending All-Ireland champions overcome the Tipperary challenge in the camogie semi finals, will be looking for the double this weekend.
“Sure one All-Ireland final will do them rightly this year,” Devaney joked.
On a more serious note though, the Donegal joint-manager said that it was ‘only right’ to agree to playing their semi-final a week later.
“We’re all sportspeople at the end of the day and, anyway, the extra week didn’t do us any harm,” he said.
Devaney is hoping that a large number of Donegal supporters will travel to Roscommon to cheer on the girls.
“There appears to be a lot of interest in the game. We know the pitch and with the other semi-final on afterwards I think there will be a good crowd,” he said.
Cork reached this year’s semi final with a big win over Westmeath at the Gaelic Grounds in Limerick and the Munster champions are determined to move on after last year’s disappointing semi-final exit at the hands of Mayo.
“Cork are a fairly formidable outfit but we will give it our best. We have a strong panel of players to pick from. We can bring on girls who are every bit as good as the players who are on there,” he said. 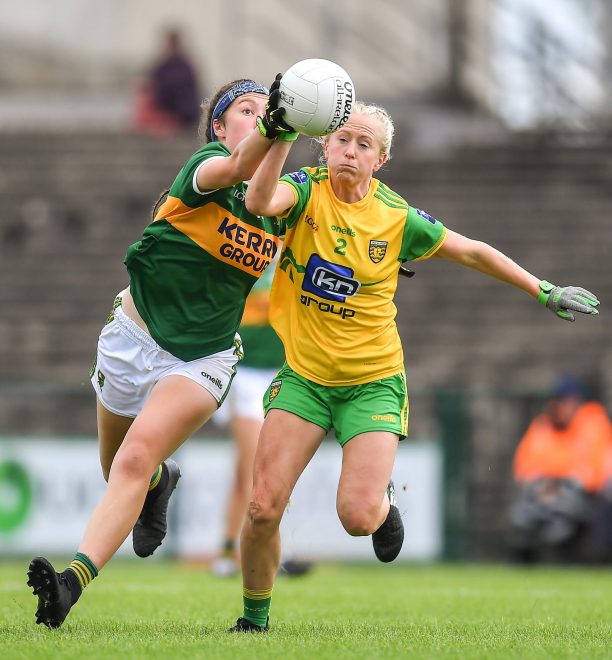 Emma Dineen of Kerry in action against Treasa Doherty of Donegal.