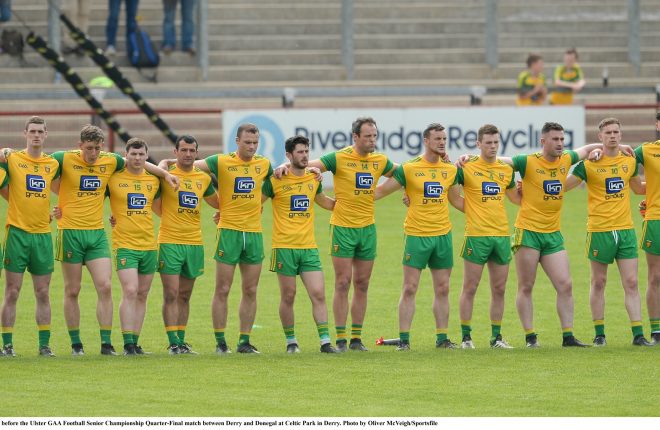 27 May 2018; The Donegal team before the Ulster GAA Football Senior Championship Quarter-Final match between Derry and Donegal at Celtic Park in Derry. Photo by Oliver McVeigh/Sportsfile

Everywhere I go this week, there is only one thing people want to talk about, and there is huge excitement ahead of our big meeting with Tyrone in Ballybofey on Sunday.

The Super 8s is the only show in town and come 5pm on Sunday, we will know the make up of the All-Ireland semi-finals on the following weekend.

From our perspective, it’s great that we are in contention going into the final weekend, and that it is all in our hands. If we beat Tyrone we are through.

There is a huge amount at stake, and it would be a serious achievement to reach the last four.

But Tyrone will also have their eyes on that prize, and they will be doing everything in their power to win.

You have two North West rivals going head-to-head, and MacCumhaill Park has never seen a match of this importance before and probably never will.

You could sense the anticipation growing since the Roscommon game, and it’s stepped up even further this week.

There is huge interest, and people are scrambling for tickets that just aren’t there.

You probably could have sold this game out two or three times, and those that do make it inside the ground, will hopefully get value for their money.

We have prepared well for the game just like we have done for every match.

We treated every game in the province like it was an Ulster Final, and once the Super 8s started, it was all about making it into the top two.

That objective is in our own hands, but it’s not going to be easy. 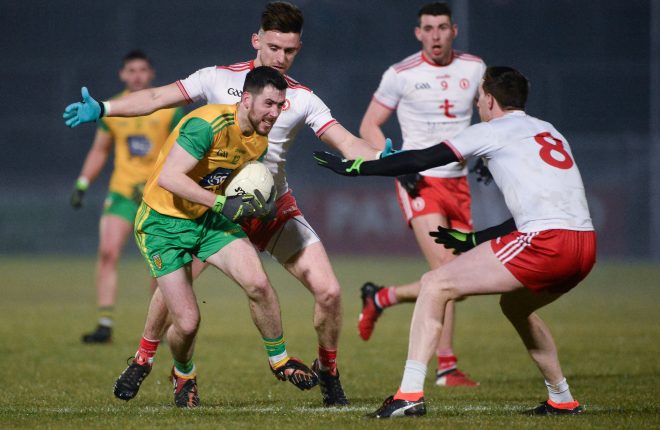 10 March 2018; Mark McHugh of Donegal in action against Pádraig Hampsey and Colm Cavanagh of Tyrone match between Tyrone and Donegal at Healy Park in Omagh, Co Tyrone. Photo by Oliver McVeigh/Sportsfile

With maybe the exception of Dublin and Galway, Tyrone have probably been the form team this season.

They have come through the qualifiers, and picked up momentum with every round.

They have some really talented players with experience of lining out in big games.

I’ve said it before in this column that Tyrone have set the benchmark in Ulster over the last 15 years, and they have three All-Ireland titles to show for their endeavours, while they also have won two of the last three Ulster crowns.

We know it’s a tough task, but as players, or a management team, or as a group as a whole, this is where you want to be.

You want to be involved in the big days when the pressure is on, and there’s little room for error.

This is why you train in the wet and the wind in winter to be ready for the crunch summer days, and we can’t wait to get going.

We have home advantage for the match, and that’s a significant help.

There will be a great atmosphere in Ballybofey, and I’m sure the shops, restaurants, and pubs will all have a good day.

I’d appeal to Donegal fans to get there early with their colours on, and soak in the atmosphere.

The finance committee have organised an ‘Up for the Match’ chat show in Jackson’s Hotel at noon, and there’s a good panel coming so there will be plenty of good GAA talk to whet the appetite.

It will be over in decent time so that you’ll still get a good spot on the terrace, and hopefully the Donegal supporters will be loud and proud.

There will be times during the match when Tyrone will be on top, and the players will have to dig in, and hopefully the supporters really get behind us then.

There’s a huge amount at stake, and we will be doing everything in our power to come out on top