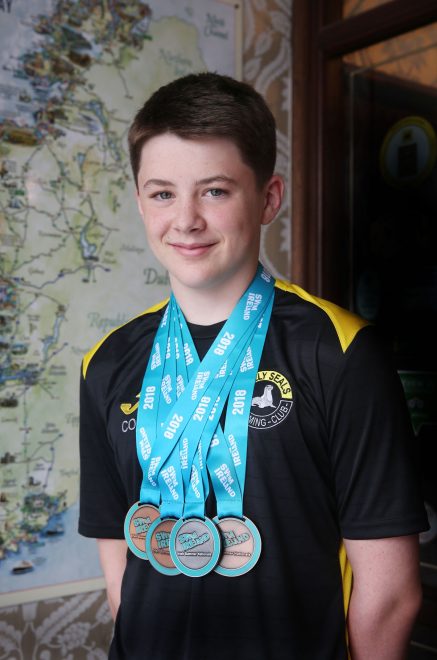 NATIONAL medlas are never easily won. To be presented with one at any stage in a sporting career gives just reason to be cheerful. Cody Dunnion of Swilly Seals, therefore, could be forgiven in smiling out the rest of the year after his magnificent return of four medals at the national swimming championships at the weekend.
The talented 13-year-old travelled to the National Acquatic Centre in Dublin with plenty of hope and duly headed back up the road with a handsome haul.
In the ’14’ age group, the Letterkenny lad won silver in the 400 metre individual medley and bronze in the 100 metre breast stroke, 200 metre individual medley and 200 metre fly. He placed fourth in the final of the 200 metre breats and fifth in the final of the 100 metre fly.
While Cody ran for Letterkenny AC and lined out for Illstrin FC in his earlier years, swimming has been getting his undivided attention since 2015. And so began the early-to-bed, early-to-rise lifestyle.
“I get up at half five and am in the water for 6.15. I swim until quarter to 8, get out, get my breakfast and head for school in Milford,” explains Cody, who will begin second year at Milford’s Loreto Community School in September.
He swims early on Monday, Wednesday, Friday and Sunday. He does strength and conditioning on Tuesday and Thursday and attends a pilates class on Saturday. It has been quite a year for Cody who turns 14 later this month. In October he qualified for the Ulster team to compete in the inter-provincials in Dublin and Ulster went on to win the title in April. Back in November he was selected for the Ulster Academy and the following month he was invited to be part of Focus Belfast 2021 – an event for potential Commonwealth swimming stars of the future. In March, he competed in the prestigious McCullagh International and in May he took part in the national indoor surf life saving championships where he won all individual competitions. He also helped Donegal to the national title. He secured Ulster titles in the 400 IM, 200 IM, and 100 BS in June. Later in the month he retained his All-Ireland Community Games title and also won a gold medal in the relay.
It has been a hectic ten months and he puts his ability to handle the load of hard work and regular podium finishes down to his coach, Chris Hudy.
“Because we only have four sessions per week in the water, Chris compensates for that by pushing us hard and to the limit. Because of Chris’s style, I think myself and Molly Nulty, who also won a silver at the nationals at the weekend for Swilly Seals in the 200 metre breast stroke, have great stamina. Myself and Molly get on really well and have been a good support for one another. We travel everywhere together.”
Cody is full of praise and admiration for his coach, who leaves Kilcar at 5 am four mornings a week on a voluntary capacity, to be on the deck for 6 am.
“He’s so funny. He’s such a legend,” he says.
“He keeps telling me that I should get ‘coach is always right’ tattooed on my leg.”
“Chris’s daughter, Joyce, also swims and she has also been a great support to me over the last three years. She’s always there to guide and encourage,” Cody adds.
“He really knows his stuff and I am still looking to improve. Long term, I suppose I’d like to swim for Ireland.”
Selection for the Ulster Academy has meant more travelling – all seven sessions were held at the 50 metre pools in Bangor and Magherafelt. Apart from these occasions and on competition days, Cody does all his training in a 25 metre pool at Aura in Letterkenny, which means he’s at a distinct disadvantage compared to those he’s mixing it with. Cody would like to get more hours in the water on a weekly basis and this is something he hopes will be rectified over the coming months.

He clocked a personal best of 5:10 for the 400 IM at the weekend and for him to be considered for the Irish squad, he has to go 5:02. Given that he trimmed six seconds off his previous bests for most of his distances in Dublin, 5:02 is certainly doable before the end of the year.
Next up is the the life surf saving regional championships in Rossnowlagh next weekend and Swilly Seals coach, Paddy Bond, is heading up the county team. All going well, he will travel to Cork for the national finals at the end of the month.
Cody is currently enjoying his first break from training this year and is spending the week with friends in Downings. When the nights close in at the end of the month, it will be back to routine of swim, school, sleep.
Such is the world of a teenager driven with the desire to succeed and improve at the deep end. 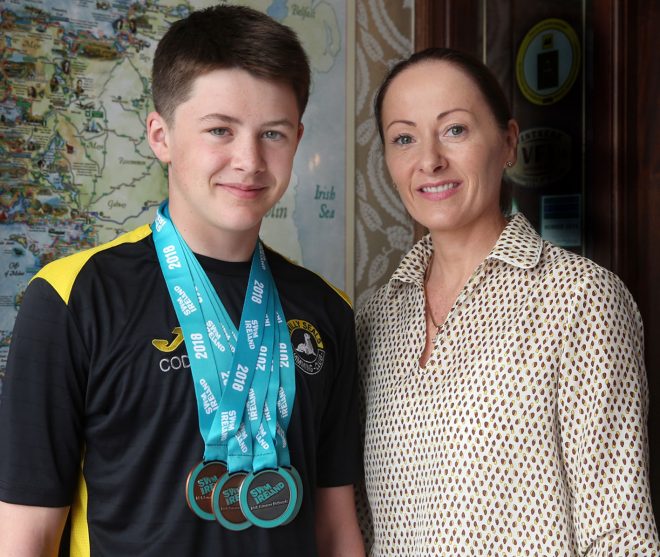 Cody Dunnion with his mum Loretto.