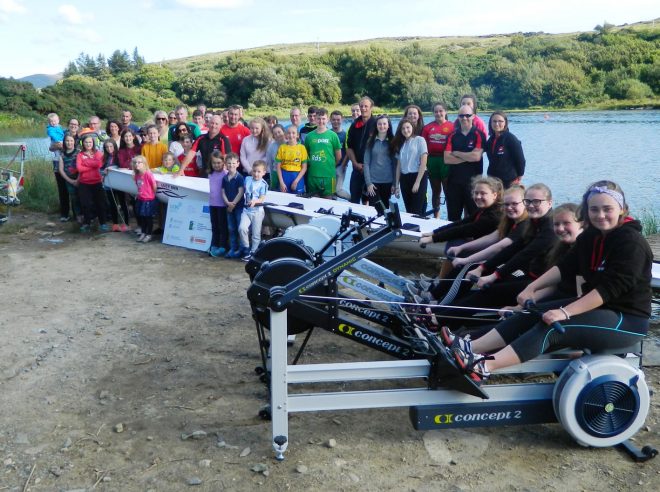 SUNSHINE and calm, clear, water make the perfect combination for rowing on Shanaghan Lake outside Ardara.
It’s Sunday evening and the local Loughros Point Rowing Club has just taken delivery of a new state of the art sculling boat, worth €8,000, courtesy of funding from the DLDC Recreation Programme and sponsorship from local oyster farmer Charlie McHugh.
A group of would-be rowers have come out to try out the sport under the watchful eye of local rowing coach Shaun Molloy a few weeks ahead of the club’s first free to try rowing event.
“I’ve been rowing for quite a few years now. I started as a way to get in shape,” Shaun explained.
He believes maintaining the ‘fun factor’ is one of the reasons for the club’s current success.
Loughros Point Rowing Club sent five teams to the Mountcharles Regatta a week earlier and came home with five cups courtesy of the U14 and U16 girls, the U16 and U21 boys and Senior men’s teams.
The Ballyshannon Coastal Regatta on August 6 is next on the agenda before they travel to Cork with thirteen crews to contest the Irish Coastal Championships on August 18/19.
Molloy is the architect of much of the success, as the club’s lead coach, but there’s another seven volunteers who have also completed the coaching course run by Rowing Ireland.
Loughros Point Rowing Club was founded eight years ago after, like a lot of good ideas, a conversation at a wedding.
“Christopher (Boyd), the club chairman, myself and a few others were at a wedding. The Teelin Regatta was coming up and we decided to get a boat and row in it and that was that,” Molloy laughed. The club has since gone from strength to strength from having one boat to fourteen boats on the lake with a membership of sixty – forty of whom would be U21.
“We’ve boats for beginners to others more suitable for the experienced rower. We’ve rowing for everybody,” he said.
Rowing was a popular sport in Ardara in the late 1970s and early 80s with two clubs operating out of the town – Tullycleave and Ardara. They came together to form the Ardara United club before disbanding.
“Our club is based around having fun. We don’t put the emphasis on competing and we tend to keep everyone mixed in the boats as much as possible so that they can all enjoy the sport. We do compete in regattas and if they win, they win but as long as they’re having fun that’s the main thing,” he said.
“We’ve got a lot of volunteers and that’s always a good thing for the club to have because we’ve got a lot of young people around all the time,” he added.
Recreation Programme
With three new rowing machines, acquired under the Sports Capital Grant, as well as the new boat on the lake Loughros Point Rowing Club is now encouraging adults to take up the sport.
“We’re going to start up a recreation programme for adults. It’s hard for four people to get down to the lake at any given time to go out on a boat whereas the new sculling boat seats two.
“It weighs only 60 kilos and is easy to launch. Once you know what you’re doing you can go out and row in the lake to your heart’s content. That’s the plan,” Shaun said.
“We’ll start a pilot programme in the next few weeks and we’ll see how it goes. We’ve eight Rowing Ireland coaches in the club. We’ve all the basic training done and between the boats and the rowing machines we’ll teach everyone how to row properly,” he added.
The new boat is named after Charlie McHugh’s daughter, Lucy Ann.
“I used to row myself years ago before it died down a bit here in Ardara. Fair play to Shaun and the club. It’s great to see that there’s so many people to help them get better and better at the sport,” Charlie McHugh said.
Loughros Point Rowing Club has provisionally been given the 2020 Irish Offshore Championship, an event which will attract between 300 and 500 rowers to Donegal for the weekend.
“Narin has all the facilities and I don’t think we’ll have any problems hosting the event. It would be a great way to mark the tenth anniversary of the club,” Shaun Molloy said.
The club is the first in Donegal to be given full affiliation to Rowing Ireland which allows them to row in all three disciplines – river, coastal and offshore.
“We’ve a river boat coming next week. One of our members, Patrick Boomer, who rows for Ireland, no longer uses his boat and he’s giving it to us,” he said.
“Our closest river club is in Sligo while there’s a new club in Gartan, outside Letterkenny, and we’re hoping to row in all three codes and have teams rowing each style,” he added.
“We would like to thank the local business community who support us every year. The entire community of Ardara is behind us and for that we’re thankful. Adult membership costs only €50 a year. It’s a healthy hobby and we’ll announce more details about the recreation programme for adults in the coming days,” he said.
The sport of rowing is not as difficult as one might think, as this writer found out after spending more than an hour on the water. The challenge is mostly in the arm and leg co-ordination, but the supportive environment and great instruction made the experience really enjoyable. I’ll be back.