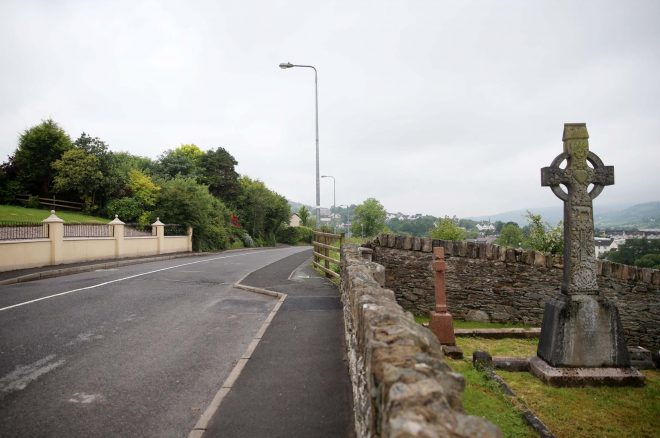 Leck road and cemetery looking west towards Oldtown. The Brooke Court housing estates are behind the trees on the left hand side of the road.

A LEADING Catholic Priest has written to Donegal County Council expressing his concern over plans to exhume a number of graves at New Leck Cemetery.
With the annual graveyard mass at New Leck this Sunday afternoon Fr Eamonn Kelly, Administrator of St Eunan’s Cathedral, said it was never a good practice to disturb graves.
The proposed route of the new multi-million euro Letterkenny Southern Relief Road has caused a lot of debate and concern since it emerged it would necessitate the need for remains buried in the Southwest corner of New Leck Cemetery to be unearthed.
More than two dozen residential and two commercial properties will also be impacted along the route while there is a proposed residential property acquisition required which will see up to half a dozen houses demolished.
Last month local residents attended a public consultation event for the new proposed route at which alignment options were outlined along the designated corridor through the townlands of Drumnahoagh, Scribley, Oldtown, Lismonaghan and Creevesmith.
The selected route will see the existing graveyard wall at Leck set back leading to the exhumation and reinterment of three graveyard plots in the Southwest corner of the graveyard.
“There were two of the proposed routes which concerned New Leck graveyard. One option, in through the centre of Leck, would have seen the removal of somewhere between sixty and seventy graves. Obviously, it is our preferred choice that no graves would be disturbed at all but I know there were massive objections to that proposal. It wasn’t workable at all,” Fr Kelly said.
“The second proposal affecting New Leck saw the removal of three graves. Again, we stressed that it is our preferred option that no graves will be disturbed. However, we do understand that we’ve no authority on this matter and it is the Council who give permission for exhumations but it’s never a good practice to disturb graves.
“Since it looks like they (Council) are leaning towards the three grave option we’re now suggesting that they leave the graves untouched and either narrow the road slightly at that point or vary the route away from the graves,” Fr Kelly added.
There is also plans for a new car park to the west of Leck graveyard to encourage people to park and walk to the town via a proposed footbridge over the river Swilly. This car park will also have enough capacity to accommodate large funerals and graveyard Masses.
“During the public consultation process there’s been no mention of the proposed car park. It’s not shown on the proposed road lay out. If they’re planning to take away existing car parking spaces and not replace them that would be a backward step,” Fr Kelly warned.