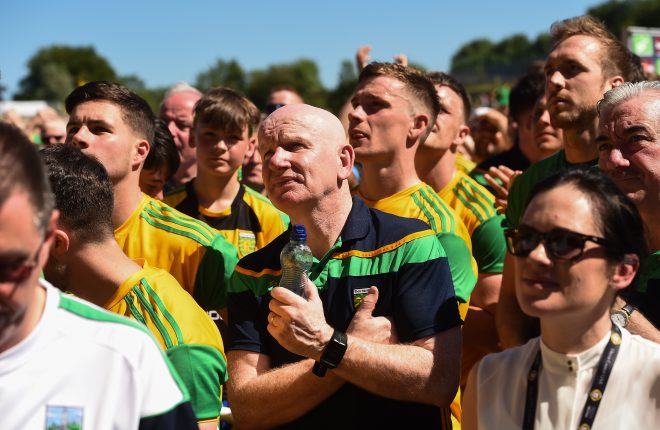 Last Sunday was one of those really special days to hail from Donegal.

We have put in a huge amount of effort all year, and although there are many days when you think that you are mad in the head to be going out the door to training, it’s always worth it in the end.

We had our eyes set on the Anglo Celt Cup since the start of the year and it was brilliant that it was coming down the road on Francie Marley’s bus with us.

I said last week that Ulster Final Day is a really special occasion, and it definitely lived up to that billing.

In fairness to Fermanagh they brought great colour to the game, and there was a real carnival atmosphere before throw-in.

Arlene’s arrival added a new dimension to it, and there was a sense that this was a really important day.

But that would have mattered little for us if we didn’t get the win. That’s what we came for and some of our lads have been in too many losing dressing rooms on Ulster Final day. There was no way we were going to be be beaten.

The game was cagey at the start, but Eoghan Ban’s goal put us into the driving seat.

Ryan McHugh added a second goal and that left us in a very good position at half-time.

We had to keep our focus and we managed to do that in the second half.

It was really warm on the pitch, and the players all emptied themselves, as did the lads that came on. You can’t ask for much more than that.

It was four years since we last won Ulster, and while that might not seem like a long time, when you consider the workrate and hunger of some of the senior lads in our dressing room, it felt like a famine.

They were delighted with the win, and there were great scenes as Michael Murphy went up the steps to collect the Anglo Celt Cup.

We mingled with supporters after the match, before going into the dressing room, and it wasn’t long until the music was pumping.

We then headed for home, and received a huge welcome as we entered Pettigo. There are some great gaels in the border town, and they always come out in their numbers to cheer us on.

It was after 10 o’clock by the time we got to Donegal Town, but it was absolutely brilliant to see such a huge crowd in the Diamond to greet us. It meant an awful lot to everyone involved with our set-up.

There was a real buzz around the Abbey Hotel, and the party went on until the wee hours.

Sunday was truly a day to remember, but unfortunately, Monday was not as pleasing.

Patrick McBrearty had picked up a heavy knock in the match, and had to come off. 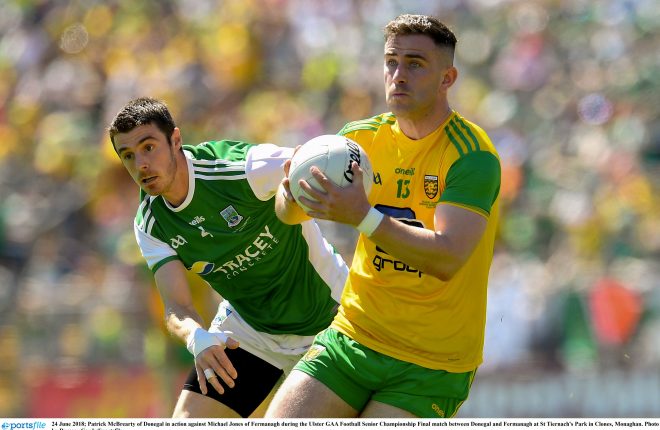 24 June 2018; Patrick McBrearty of Donegal in action against Michael Jones of Fermanagh during the Ulster GAA Football Senior Championship Final match between Donegal and Fermanagh at St Tiernach’s Park in Clones, Monaghan. Photo by Ramsey Cardy/Sportsfile

He had a scan on Monday at Letterkenny Hospital, and while we had our fingers crossed for good news, unfortunately it wasn’t.

Patrick became the latest victim of the cruciate injury, and now faces a long spell on the sidelines.

It was devastating news for Patrick and his family, and it’s horrible that a young man who has really rose to the top of his game will be sidelined for a large chunk of the coming year.

Patrick has been brilliant for me since I became manager. I watched on last season as he led Kilcar to the Dr Maguire, and I wanted him to take on more responsibility with Donegal this year.

That’s exactly what he did, and he has become an important leader within our camp.

He was having a fantastic season, and while that had a lot to do with his undoubted talent, his commitment and effort on the training pitch also had a big role to play.

Patrick is living in Dublin, but he was driving down to training with us, and putting in a big shift, and then turning the car back for the capital.

He rarely missed any training sessions, and even when he picked up a knee injury late in the league, he had the mentality to come back really quickly.

He is a very determined young man, and he will get plenty of support from our camp.

You have Paddy McGrath and Darach O’Connor who have returned to full health after similar injuries, and it won’t be long before we see the Kilcar man back in the green and gold again.

It’s not the news we wanted with the Super 8s starting in two weeks time, but we just have to get on with it.

The lads visited McHugh’s Recovery Room on Tuesday, and it was back on the pitch on Wednesday night.

We trained hard as we have done all season, but we didn’t overdo it. The lads have a big game against Dublin to get ready for, and there’s no time to waste.

It’s great that we are in the Super 8s, and it will be interesting to see how the new format plays out.

I have to say that I find it strange that our first game is not on home turf.

Instead we have a ‘neutral’ game against Dublin, and they have fixed that for Croke Park. That doesn’t sound too neutral to me!

We will then have an away game, before finishing off with the match in MacCumhaill Park on the August Bank Holiday.

We won’t know who we are playing in our other two games until Sunday week, which makes preparing difficult.

In fact, it’s hard to see where the incentive is for winning the provincial championships, as it appears to favour counties coming through the back door.

It’s not going to be easy, but we will do everything in our power to make sure we get through to the All-Ireland semi-final. Bring it on.