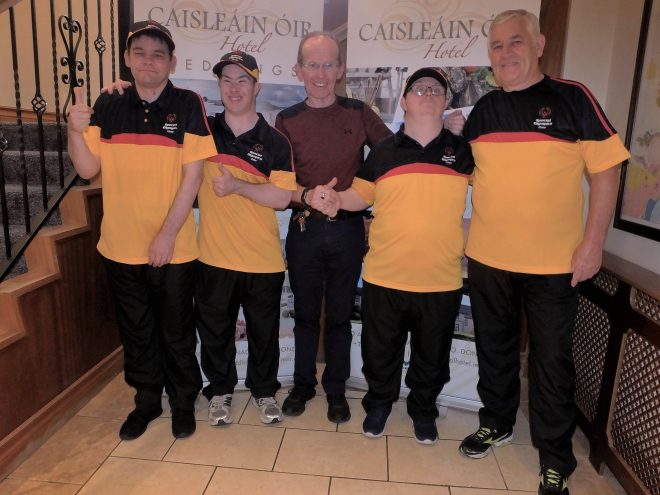 THREE Donegal men are getting ready to compete for Team Ulster in next weekend’s Special Olympics Ireland Games.
Rónán Ó Coirbín, Gaoth Dobhair, Peter Doogan, Gortahork and Patrick Gallagher, Annagry will take part in the Bocce competition at the Ireland Games which is being held from June 14 to 16.
The new Sport Ireland National Sports Campus in Blanchardstown will play host to the competition which will see 1,600 athletes competing for their region over three days.
Peter Doogan from Upper Keeldrum works in Molloy’s Supermarket in Derrybeg. Patrick Gallagher is a client in Tobar Training Centre in Gaoth Dobhair and Ronan O Coirbin (Corbett) works in RAP Teo.
They are all members of the Errigal Sports and Social Club which was established in west Donegal in 2006 and they had to qualify from the Ulster Games that were held in Magherafelt last year.
All three won gold medals in bocce and they have spent the past six months attending collective sessions to hone their skills at the Jim Baker Stadium in Templepatrick as part of the twenty-strong Ulster Bocce team.
Noel Flynn is head coach at the Errigal Sports and Social Club: “I’m delighted for them and their families,” he said.
Bocce is an Italian Game which is very similar to lawn bowls. Opposing players and teams play with either red or green balls, competing in singles, doubles and team events. The objective of the sport is to roll a bocce ball closest to the target ball, which is called a pallina.
Some of next weekend’s winner will go on to represent Team Ireland in the 2019 Special Olympics World Summer Games which will be held in Abu Dhabi, United Arab Emirates, in March 2019.