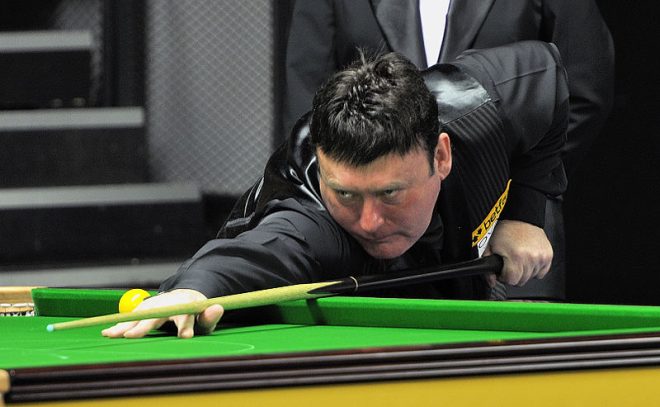 Snooker’s Jimmy White who spoke to the Donegal News during his recent visit to Letterkenny.

DURING the 1980s there was literally no bigger draw in the game of snooker than Jimmy White.

Despite the decade belonging to Steve Davis in terms of success, it was the Whirlwind the crowds flocked to see.

Davis retired from the game two years ago while his successor, Stephen Hendry, has followed him off the professional stage. In fact they have all gone, all those who played a part in what was a golden age for snooker.

Some have traded the baize for the commentary box – Taylor, Griffith, Thorne, Virgo – while others chose to burn out rather than fade away, stars like Alex Higgins and ‘Big’ Bill Werbeniuk.

Given his previous penchant for drugs, drink and women, Jimmy White could easily have been among that latter group. But where others failed, he has managed to cast out his demons. Looking trim and healthy, the man from Tooting strode on to the stage in Letterkenny recently for an exhibition match against Ronnie O’Sullivan, a player whose take-no-prisoners style has him pinned by many as the Jimmy White of the modern game.

A capacity crowd turned out to watch the two go head to head with as many there to cheer on the 56-year-old as there was to see the Rocket.

Speaking exclusively to the Donegal News, White revealed how he has been buoyed by 43-year-old Mark Williams’s recent World Championship heroics at the Crucible and how he believes he has at least one more big win in him before he hangs up his cue.

“I’m chilled to the bone. I’ve lost four stone and I’m a whole different person altogether. Where before it was alcohol, fast women and slow horses, these days it’s about practice and about playing with my grandchildren.

“Last year I beat four top 16 players. I got through the first rounds but didn’t progress after that. But next year I’ll be doing a lot better. This is my last year as a professional but I’m enjoying it and you’ll definitely see me with a couple of victories. If Mark Williams can win the world title, I can win a ranking tournament.” 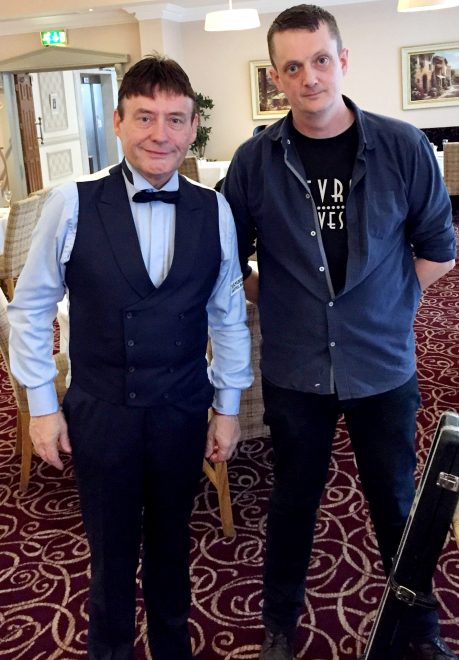 Donegal News journalist Conor Sharkey with snooker legend Jimmy White ahead of his exhibition match with Ronnie O’Sullivan at the Clanree Hotel recently.

Snooker’s first revolution was in the late 1970s when the advent of colour television took it out of the smoky clubs and into the box office big time.

Behind the second revolution has been businessman Barry Hearne. As he did with darts, Hearne has grabbed snooker by the lapels and shaken it almost beyond recognition. Shot clocks, walk on music, female referees – all a far cry from the drab days of watching Cliff ‘The Grinder’ Thorburn labour for three minutes over a single shot.

Jimmy White says Hearne’s intervention has been just the kick up the backside the sport needed.

“Snooker was so bad eight years ago I went into the jungle,” he says, referring to his stint on hit reality television show I’m a Celebrity.

“There was only six tournaments, it was in such a bad state. Now, if you are any good at snooker, you can make a lot of money and travel the world. It’s good to be a snooker player again.”

Undoubtedly the system of old, with only a handful of ranking tournaments, stifled the ability of upcoming players to progress. Hearne’s reshuffle has trebled the number of opportunities to pick up ranking points and by extension, move up the standings towards the lucrative top 16.

To do that though players have to be prepared to travel, from competitions in India to China to Latvia to Australia to Gibraltar and everywhere in between. So has snooker become biased towards players with commitments and family in favour of those who can freewheel at their leisure?

“If you have a kid of 18 and they are good at snooker, you aren’t going to listen to them talking about his family or about education. Those are the sacrifices you have to make. Alex Higgins did it, came over from Belfast. Dennis Taylor did it. All the Chinese boys are doing it.

“I agree that it splits families up and that is terrible but so do most sports.”
‘Sexy snooker’ is a term that has crept into the beautiful game of late, coined largely for Judd Trump, the quick firing Bristol 28-year-old. The 1980s had ‘sexy players’ too in Alex Higgins, Kirk Stevens and of course Jimmy White. But can the two eras be compared?

“What you have now, I don’t think the players are much better apart from the few exceptions like Ronnie, John Higgins, Mark Selby. But apart from them you have a lot of average snooker players who can go and make century breaks. But that is all they can do, they can’t compete in the safety, they can’t compete in the long matches. The players today from outside the top 32, I don’t see anyone coming through that you could say they are going to win tournament after tournament.”

White’s new health regime has clearly re-ignited a fire in his slimmer-than-before belly. And the Whirlwind pulls no punches when laying it down to snooker’s current elite.
“Maybe the players have had it too easy. Maybe Ding’s [Jun Hui] desire is gone. Judd Trump is one of those players who hasn’t improved for me, no one is scared of playing him, they all fancy they have a chance against him.

“It seems to me that it is a business for some of these players, but the passion isn’t there and they don’t really want to win the tournaments. You should think like they think where they say ‘I came fourth, I won £100,000, that’s a good two weeks work’. But somewhere along the line you have to say well f*** me, I want to win one. But some of them don’t seem to have the desire for me.”

At approaching 60, Jimmy White is clearly not prepared to go gently into the night like so many before him. But surely the sun must be getting ready to set?
“I don’t know. I just watched the Rolling Stones the other night, 74 years of age, Mick Jagger running around. Age is just a number and you’ve just got to keep going for it.”