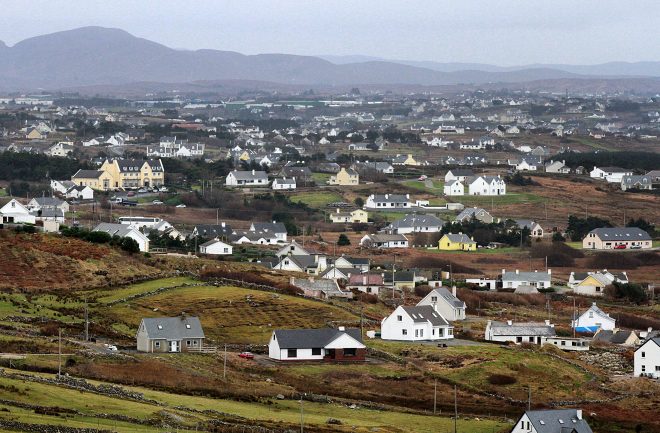 A view towards the Carrick area of gaoth Dobhair from Cnoc Fola this week with the popular local landmark guesthouse Teac Jack on the left of the picture.

WEST Donegal has received a significant jobs boost with confirmation that 127 new positions will be created on Páirc Ghnó Ghaoth Dobhair before the end of the year.
Details of the new jobs were announced by Mícheál Ó hÉanaigh, chief executive, Údarás na Gaeltachta who said it was a ‘huge boost’ to see that the agency was achieving its employment targets.
Speaking to the Donegal News, Mr Ó hÉanaigh confirmed that existing companies on Páirc Ghnó Ghaoth Dobhair currently have 44 vacancies with a further 83 ‘imminent’ positions to be advertised in the coming months.
He said the state agency is also in advanced discussions with a number of other companies who are interested in locating their businesses in Gaoth Dobhair. Those talks are at an advanced stage and, if successful, could lead to more than 100 additional jobs.
“At present there will be 120-odd new jobs that have been signed off on and, hopefully, will help to attract some younger people back into the county. They’re a mix of traditional manufacturing jobs and those based on new technology,” Mr Ó hÉanaigh said.
Meanwhile, Ireland’s first kombucha brewery DBKB – based on the former Largo Foods site – has announced that its products are to be stocked by UK retailer Sainsbury’s in its 600 stores.
“They’ve been on the estate for four years, based on part of the old Largo Foods site and former England rugby international Jonny Wilkinson is a brand ambassador for them,” the Údarás chief executive added.
It was the closure of Largo Foods that led Údarás into establishing an Enterprise Development Forum, which brought together key agencies such as the county council and Letterkenny Institute of Technology and put together a three-year plan to “turn things around” with a target of 300 jobs upon completion.
Since March 2015 Údarás na Gaeltachta have announced 313 full-time jobs on Páirc Ghnó Ghaoth Dobhair
“We’ve achieved our employment targets but we acknowledge that there is still plenty of work to be done. The sad reality is that there were no local jobs for a number of years and people were forced to leave. We’re now hoping to attract some of those people back to work in Donegal,” Mr Ó hÉanaigh said.
The Áislann Gaoth Dobhair, a three-storey enterprise, innovation and digital hub centre with a hot desk space, has helped hugely in that regard.
“We always welcome new businesses, both large and small, which will contribute to strengthening the employment base in rural Gaeltacht areas.”
Over the past three years ago Údarás has invested over €6m in Páirc Ghnó Ghaoth Dobhair including €1.7m ear-marked towards a further expansion of Rapid Action Packaging (RAP) Ireland, who currently employ 230 people in Gaoth Dobhair.
More that half a million has been spent on creating a ring-road around the estate, €1.2m on first floor office space in the Áislann, €1.64m on various projects for RAP and €2.2m on redeveloping the former Dianorm Factory as a Logistics Centre for businesses on the estate.
“We recognised that capital investment was required and we’ll continue to adapt accordingly as we find newer ways of doing things,” he said.
Fourteen new companies have been set up on Páirc Ghnó Ghaoth Dobhair with 529 full time jobs in Údarás client-companies on the estate at the end of May compared with 357 in May 2015.