Advertisement
HomeBreaking NewsMum hails BUMBLEair as ‘game-changer’
Advertisement
A MOTHER  whose son has been the first child in Donegal to fly home from Our Lady’s Children’s Hospital in Dublin by BUMBLEair has hailed the service as a “game-changer”.
Oisin Campbell flew into Donegal Airport in Carrickfinn from Weston Airport on Tuesday in the arms of his mother, Fionnuala Doherty and under the expertise of pilots, Gerry and Ryan Hanrahan. The journey took just one hour and twenty minutes instead of the lengthy journey by road of up to eight hours.
A nephew of Pearse Doherty TD, the three-and-a-half year old warrior from Derrybeg in Gaoth Dobhair courageously faces adversity head-on. He was born with a chromosomal abnormality so rare that medical experts don’t know what will happen in the future. 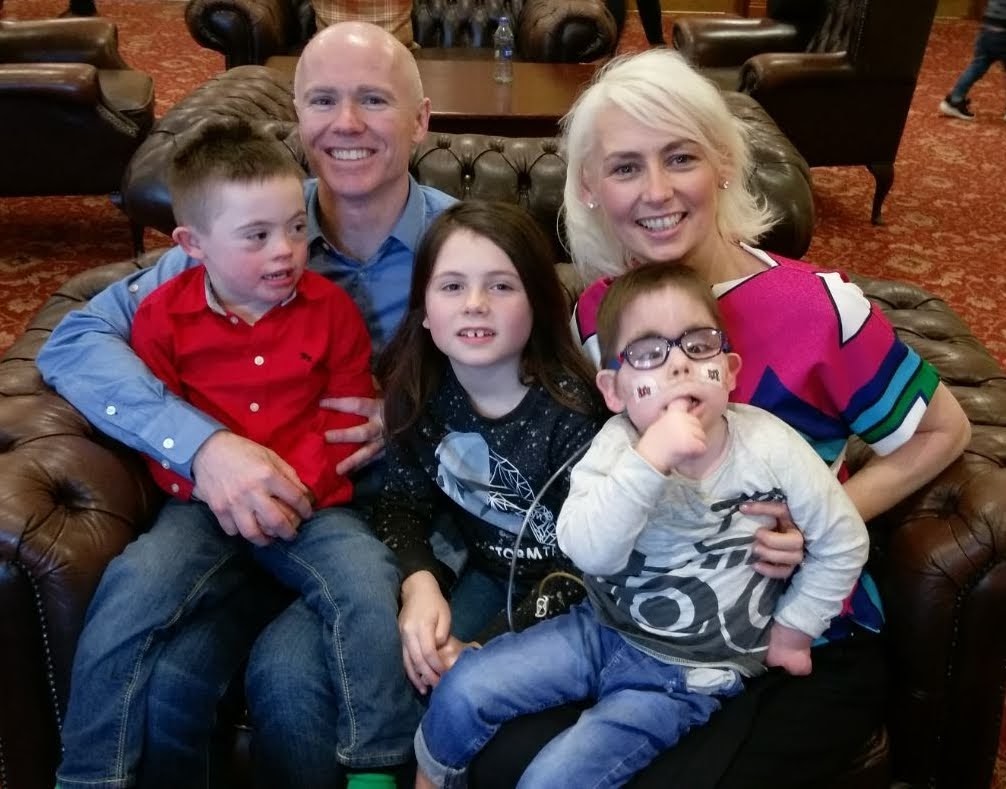 Fionnuala Doherty pictured with her husband, Cathal Campbell and their three children.

Speaking to the Donegal News, Fionnuala described what day-to-day life is like for her son and her husband, Cathal Campbell and their other children, Siófra and Dónall, who has Down Syndrome.
“Oisin is on oxygen, he is profoundly deaf, he is peg-fed and suctioned regularly. He has epilepsy, hyper insulin anaemia, which means he gets low blood sugars but it is a different condition to diabetics. He also had Global Developmental Delay, a severe intellectual disability and he can’t take anything orally.”
The youngster needs nursing care every morning and evening. Such are his complex needs, little Oisin has to be monitored round-the-clock. He can only ever be in the care of nursing staff and his parents due to the difficult nature of his condition.
“One of the biggest problems is that Oisin is unpredictable. He has to be monitored all of the time. We have to be on standby to monitor his oxygen levels. We can’t leave him on his own.”
Having made the horrendously long journey to Crumlin on many occasions, Fionnuala told of how when she learned of BUMBLEance, their lives were transformed.
“I can’t remember when we first used BUMBLEance, I just remember the hospital telling me about it. Our journeys to Dublin were horrendous with everything we had to pack up in terms of medication. It would have taken us between six and eight hours to get to Dublin. We would have to stop a lot on our journey and pull over to the side of the road to check Oisin’s oxygen levels. When we got our first trip on BUMBLEance the difference was incredible.
“Oisin is not a good traveller, he needs to be lying slightly angled and that’s why BUMBLEance works for him and it is easier to look after him in the privacy of the ambulance and while it is still moving. The journey was far shorter too. We were getting home from Dublin in five hours, whereas before it could have been up to eight hours.”
BUMBLEair was introduced last year, and when Fionnuala heard of the opportunity for them to travel on the aircraft she initially had reservations. However, after boarding the helicopter her hesitations fell to the side. The journey would be a poignant one for more than one reason, as it was the first time Fionnuala could travel with her son.
“When we were told we were getting the flight, we thought it might not work but it was unreal. It was unbelievable.
“We boarded the helicopter and Oisin just loved it. It was so much more special too because it was the first time I travelled with Oisin. I used to travel in the car behind him in the BUMBLEance because I don’t travel well and my husband would travel with Oisin. Coming home by air with Oisin was a unique experience. He loved it too. His heart rate just settled and he even fell asleep in my arms. When we arrived home he was so full of life.”
Fionnuala said the journey was made enjoyable and seamless thanks to the pilots.
“The service is amazing. We travelled on the BUMBLEance to outside Crumlin and we were taken to the aircraft. The pilots were amazing, so caring and nothing was too much trouble for them. After we met them, we boarded the helicopter with all of our stuff and they talked us through what would be happening.  We went through safety checks and then we were hovering a bit before we went up in the air. Throughout the journey they told us where we were flying over and kept us informed at all times.”
Fionnuala described the service as a “critical” one, particularly for families in Donegal.
“I told the pilot it was an amazing service and it took away so much worry and stress for us, and there was actually a bit of fun put into the journey that we would never have had.
“Donegal is so far from Dublin and our roads are not equipped for that journey. It’s so long, we’re cut off. We are the forgotten county.
“Our lives are very complicated and stressful and with the appointments in Dublin that all adds to our stress. With
BUMBLEance you’re able to do things with dignity; things that you cannot do in a car. In the past we have had to go into hotels during our journey to or from Dublin and ask for the use of a room to tend to Oisin. Hillgrove Hotel in Monaghan were always exceptional to us and there was another place in the north too that was very accommodating.”
Fionnuala said attending hospital appointments with Oisin are stressful enough because she never knows what doctors will tell her.
“Having BUMBLEance has been a game-changer for us.” 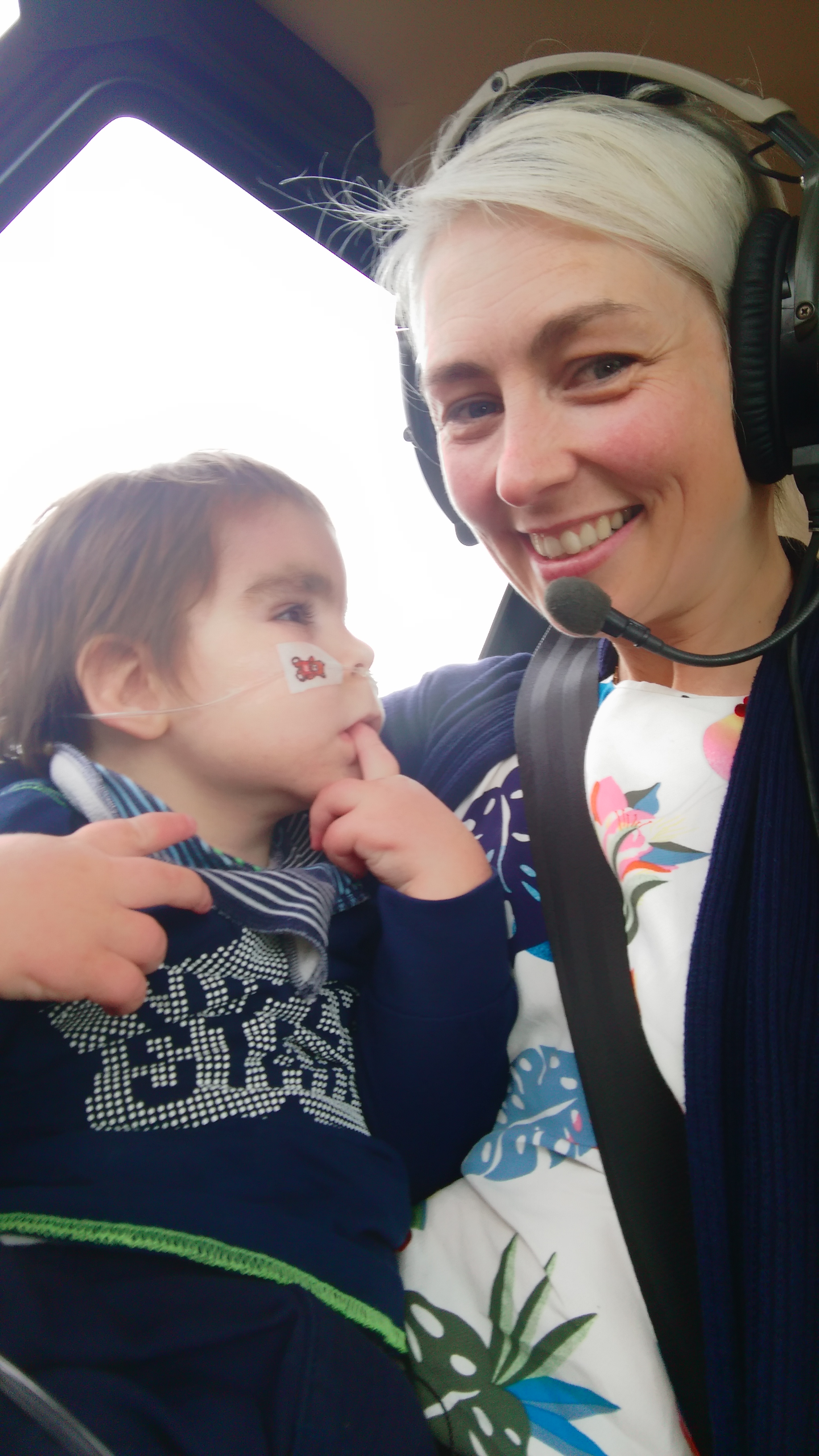