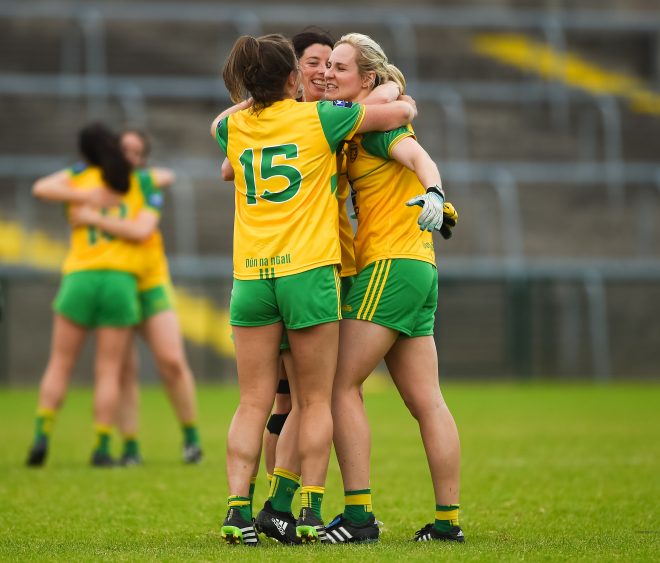 Ciara Hegarty is adamant that her Donegal ladies side isn’t content with just holding onto their Ulster crown this term.

The Moville girl – superb for the winners in victory over Armagh at the weekend – wants the Tir Chonaill ladies to make a real dent in the All-Ireland series. Donegal have had their problems outside the province in recent seasons.

But having delivered their most impressive Ulster crown to date, they will take some stopping. Their power and pace was uncontainable. Armagh, a quality side, were made to look mediocre in Brewster Park.

“We are just delighted,” she told the Donegal News. “Everyone worked as hard as they could. You could see that effort all around you. Of course we have some things to address. We conceded four goals and that’s not good enough.

“But today we’re just going to focus on the positives. We’re very happy with that. We’re Ulster champions again. That was the initial aim and we’re over the moon to have done it.”

Donegal’s embarrassment of riches in attack will no doubt grab the headlines. But Hegarty and her defence were also crucial in reducing Armagh to a shadow of their usual selves. The former provincial queens were rattled from start to finish by Hegarty and co.

She added: “We knew what we had to do. Armagh have a lot of threats all over the field. We know if we do the work at our end the girls up top will take care of the rest. We will enjoy this. Of course we’ll look at it a little closer during the week and look to address the few blips we had.”

Hegarty – a current All-Star – agrees Donegal are capable of building up a head of steam in the All-Ireland series.

“We’re determined to get past that quarter-final mark,” she said. “It’s something we haven’t done so far. Our focus is the All-Ireland. There is no point pretending. I know that’s what I was training for when I came back in November.

“This is another step towards that.”