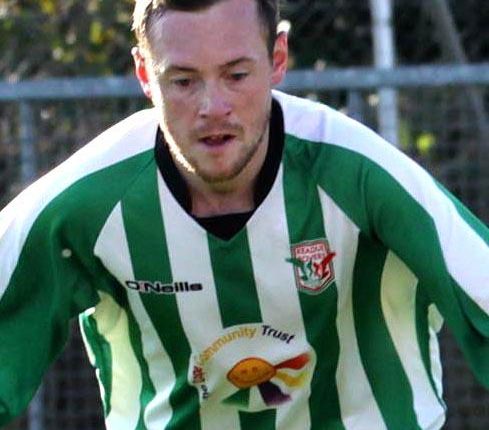 If you were throwing a party and you could invite anyone in the world, dead or alive, who would you ask around? I’d bring a few messers like Will Ferrell and Jimmy Bullard. Denis Sulta would be on the decks

Where do you like to go out to celebrate after a big victory? Down to Kelly’s for the soup and sandwiches then we usually end up in Steppers in Dungloe

What’s the worst pitch you’ve ever played on? Either Tullyvinny or Drumbar. Shockers!

Which character in any film are you most like? Peter LeFleur from Dodgeball

Any odd items in your kit bag? I used to use clothes pegs to keep the tongue down on my old preds!

Who’s the biggest joker in the team you play for? Chris Greene and Shaun the Yank are two great men to get the craic going. Wee Hanlon too

Which team mate has the best looking other half? There’s not too many to be fair, we do our scoring on the pitch!

Who is the worst/best trainer? I don’t think Hugh Moy has ever missed a session. If you’re on his team, you usually win.

Who spends most time in front of the mirror in the dressing room? Yank maybe? Jack Boyle likes to make sure he’s looking fly as well

Who’s the best/worst person to sit beside on the team bus? Eugene (Two-gene) Byrne always has a few jokes up his sleeve on the bus

Who has the best and who has the worst diet on the team, and what does it include? I would be one of the worst. Too many pizzas and takeaways. Christy Greene has the best. He enjoys taking his wee lunch box of pre prepared chicken and rice.

Toughest opponent you have faced? Daniel McHugh is our tough man. When he hits you in training, you stay hit! The Gweedore and Glenea lads are always hard hitters as well

Best or worst quote you’ve heard, either from a manager, player, opponent? Ben Boyle’s famous quote of saying “anything can happen in a cup match. You can be 2-0 up one minute and 3-1 down the next” or Packie Gallagher telling us that we had 11 men not interfering with play after we conceded a bad goal!

Best ever performance? Raphoe at home on the last day of the season. Scored two and set up Cory’s goal to get us promoted

One to forget? Gweedore Celtic at home this season

Sporting ambition? To win the Premier League with Keadue

When you were playing in the back garden, who did you pretend to be? Ronaldinho or Henrik Larsson

If you were in charge of transfers, who’d be in and who’d be out of the team? I played a big part in signing Gavin McGlanaghey this season. If Cory doesn’t beat his performance from last season, we might have to look for another talisman!