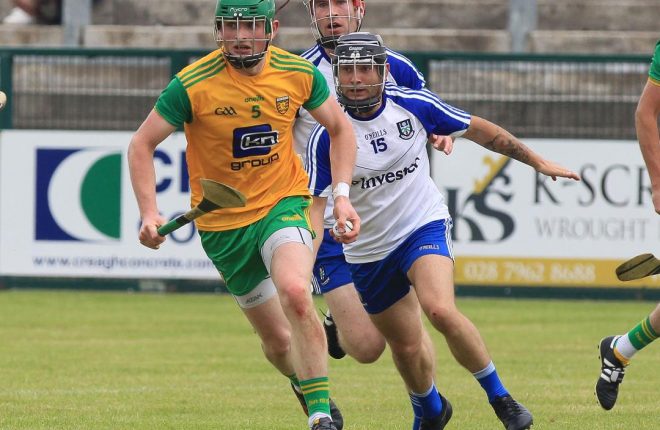 Gavin Browne in action in the semi-final against Monaghan.

“When you live beside Jamesie Donnelly and his brother Martin, there is only one sport you are going to play.”

Gavin Browne says hurling was the only sport that came into the equation when he was growing up in Stranorlar.

Browne has been hurling since he was ‘five or six’ and has come through the ranks with Sean MacCumhaills.

He has thrown in his lot with Donegal this year too, and is likely to line out at left-half back today when his team take to the field in Croke Park for the Nicky Rackard Cup Final.

On the other wing will be Donnelly, and Browne says he wouldn’t be lining out at Headquarters if it wasn’t for his neighbour and mentor.

“There was no getting away from him and Martin but I’m glad now that I couldn’t get away or I wouldn’t be playing or have the chance I have with the team come Saturday.

“To be honest, it’s a pleasure to play with Jamesie because he was always an idol of mine and it’s nice be playing beside him and to have him keeping me on my toes.”

The 24-year-old has impressed in the green and gold jersey and played in the three championship wins over Tyrone, Leitrim, and Monaghan this season.

He says that he has loved hurling since he was knee height, but admitted that he didn’t always prioritise the sport when he was younger.

He also acknowledged that representing Donegal was not top of his agenda until this year.

“To be honest, I didn’t. It was always club for me but I gave it a go in 2015 and couldn’t stay with it because of work, and I couldn’t commit to the team.

“When Mickey (McCann) took over all our club players made a group chat and after what was said, it really made me want to commit to the team as best as I could.

“I never thought I’d get as much game time as I am getting because it’s a very strong team and there are great players on the panel.”

Browne starred for MacCumhaills as they reached the Ulster Junior Club Final two years ago, and he has been one of the most consistent performers on the Donegal club scene in recent seasons.

When McCann took the reins last year, he identified Browne as a man that could offer something to the panel.

It wasn’t a straight-forward call for Browne, who works for Nomadic Dairy in Killygordon.

However, he ultimately decided to give it a go, and is delighted that he has given his all to the cause.

“When you’re doing something you like, and you get on with the bunch you’re doing it with, it makes it good craic.

“It’s not all serious, everyone gets on very well and it shows in our form this season I think.

“Gabriel (O’Kane) and Mickey have us in a great position, fitness wise and touch, and we’re in a good head space going into this weekend.

“It’s all worth it now when you see where we’ve ended up and what could be coming down the road with us come Saturday evening, with the help of God.”

Browne featured regularly in the league, but was on the bench for the Nicky Rackard opener with Tyrone.

However, he won his spot back the following week against Leitrim, and he is pleased with both his own form, and that of the team’s.

“Overall I’m happy yeah. I must be doing something right when I keep getting the nod from the managers so I’m happy out.

“Our goal at start of the season was to get to Croker in June and we are buzzing to get up now and express ourselves.”

Saturday’s match will be the first time Browne has taken to the hallowed turf on Jones’ Road, and it’s a long way from pucking the ball outside his house in Stranorlar.

He admits that he doesn’t know too much about Warwickshire, but that’s not a big issue as he readies himself for the biggest game of his career to date.

“I never thought I would get the chance to play in Croke Park – it’s definitely something to tick off the bucket list.

“We are getting ready for a big battle. We know we are in for a tough, tough game but personally I don’t know anyone we’ve played this year.

“It’s all new to me. I’ll just play my game as best I can and hope that’s enough.” 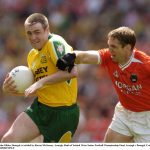