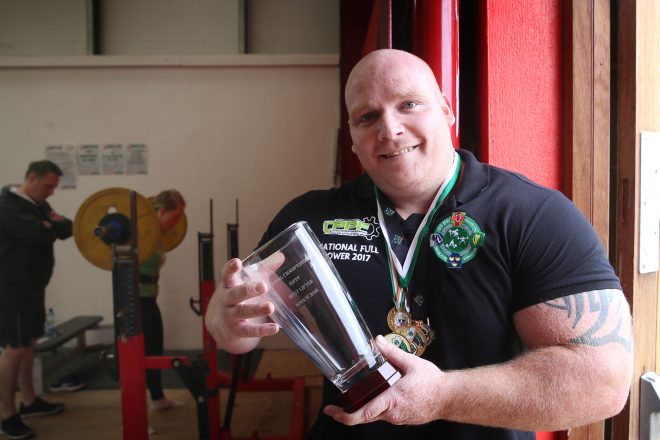 A Letterkenny weightlifter will travel to Malta next month to take part in the World Drug Free Powerlifting Federation (WDFPF) Championships.
John McHugh has only been involved in powerlifting for fourteen months after more than a decade as a boxer, but already he’s the holder of multiple national records in squats and bench press. This is his first trip to the World Championships where he will come up against full-time professionals, as is the norm outside of Ireland, but he’s already set his targets on a world record.
McHugh competes under the Irish Drug-Free Powerlifting Federation, in a sport riddled with steroid and other drug abuse. Over the coming weeks he hopes to drop from 145kg to 125kg in preparation for his world record attempt.
“I’m out jogging three times a week while I’m in the gym twice a day. Even though I’m a big boy I feel that 125kg is my best competition weight. I’m only eight pound off that target now and by the time Malta comes around I should be ready,” he said.
A member of the Motiv8 Powerlifting Club in Letterkenny, he won the Best Lifter of the Day Award at last month’s Irish Drug Free Powerlifting Federation’s national championships in Dublin.
“The world bench press record stands at 235 kilos. I’ve lifted 230 and 225 in my last two competitions so I’m not too far away,” he said. Married to Lyndsey, the couple have two children Josh (8) and Sophie (6). He works at Optum, Letterkenny, and he paid tribute to his employers and his coaches, Nigel Drein and Jim Collins, for their help and support.
Originally from Middlesborough in the North of England, John has been living in Letterkenny for the past 13 years.
“My dad (Dominic) is from Dungloe. He met my mum (Margaret) on a Monday and by Friday of that same week they were engaged. They’ve been together for forty years now so that worked out well,” he said.
“I’ve trained all my life but only started powerlifting when I joined the Motiv8 club in Letterkenny last year. Before too long I was breaking National and European records. I found something that I was good at and hopefully I can inspire others to take up the sport.
“There is that element of drug abuse in powerlifting, but obviously not in my federation. I don’t see a reason to take drugs. It’s important to say that I’m drug tested after all big competitions because there are a lot of cheaters out there.
“Powerlifting makes me feel better. It is quite addictive. I think it’s important to teach my children good habits. I like to see them playing sport – getting outside and enjoying the fresh air,” he said.
“In old money I normally weigh in at around 21 stone. I’m in good shape. I’ll be looking to bench press around 37 stone in Malta,” he said.
“Shane McMenamin, also from the Motiv8 club, will be joining me in Malta,” he added. 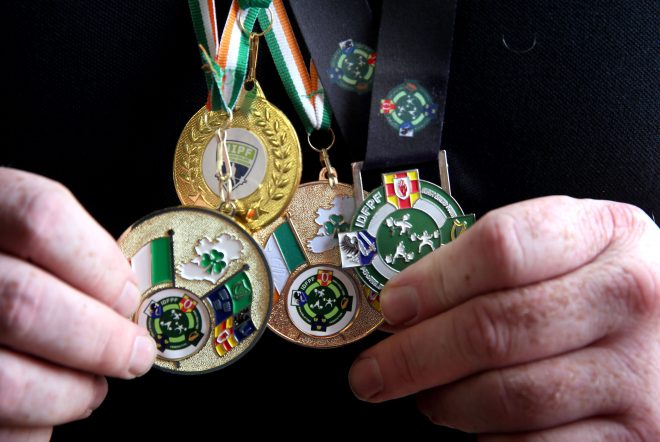 Some of the medals won by John in the past year.