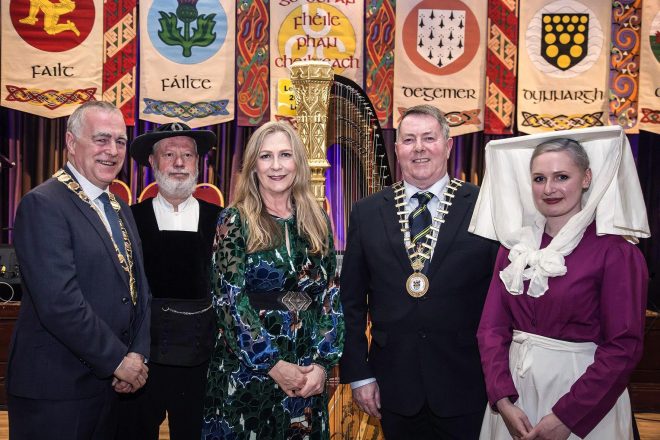 Pictured at the opening of the festival Cllr. Jimmy Kavanagh, Mayor of Letterkenny MD, Mairead Ni Mhaonaigh, Cllr. Gerry McMonagle, Cathaoirleach of Donegal County Council with representatives from both the Breton and Cornish delegations.

THE ORGANISERS of the Pan Celtic Festival have said more than 4,000 people visited Letterkenny during the week long event generating an estimated €3 million for the local economy.

This was the 47th year of the festival which drew to a close yesterday with an international church service in St Eunan’s Cathedral.

Some of the highlights throughout the week were the choral concert and the parade from An Grianán Theatre to Market Square on Friday as well as the busking competition and song contest.

Caitlin Ui Chochlain from the Pan Celtic Festival Committee said everything ran smoothly throughout the week.

“Ireland was very well represented in the competitions and in the entertainment with the Inishowen Carnival group and Inishowen Brass Band as well as the Letterkenny Pipe Band,” she said.

Ms Ui Chochlain said they were very pleased with the numbers who turned out to watch the parade despite the bad weather.

“We were delighted with it and so were all our visitors. There has been so many highlights. The song contest, the parade and the choral concert, with 11 choirs taking part. There is so much talent all around.”

The Letterkenny branch of Comhaltas supported the festival events and the committee said they had great support from right across the community including the Cathedral Quarter Committee. In terms of tourism the festival has been a great boost for the area with visitors not just remaining in Letterkenny but also travelling to see Sliabh Liag, Glenveagh National Park and Malin Head while they were here.

“All the accommodation services are full, every hotel and B & B is full. It has brought Letterkenny to life and we need to hold more festivals like this,” said Ms Ui Chochlain.

The Pan Celtic Festival will return to Letterkenny next year and the committee believe they can build on this year’s success.