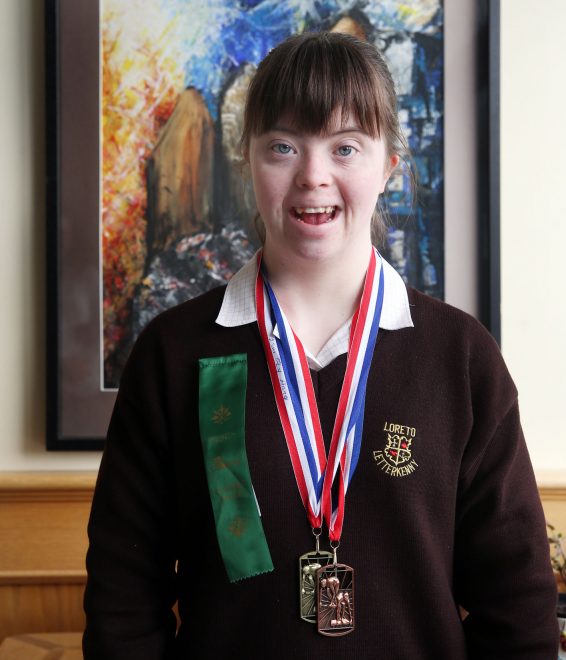 LETTERKENNY swimmer Anna Hennessy won a gold medal at the Down Syndrome European Swimming championships in Southampton last weekend.
Anna (18), who is a fifth year student at Loreto Letterkenny, won the 25 metre butterfly title in 23.51 seconds, knocking more than five seconds off her personal best time in the process.
A member of Team Ireland, Anna also won bronze in the 25m freestyle (20.60 seconds) while she was just outside the medals in the 50m freestyle, finishing fourth in 45.63 seconds.
Anna was one of sixteen young athletes from across Ireland who were competing with swimmers from Scotland, Wales, England, Sweden, Spain, Russia and Estonia.
“I can’t believe I won a gold medal and I came first,” she said.
“I was with my team, my friends and my parents and they’re really proud,” she added.
The student, who lives with her parents Mairead and Kevin in Rockhill, is coached by Patricia Greenan at the Clanree Hotel leisure centre and, more recently, Sinead Dannagher at the Nemo Special Olympics Swim Club in the Finn Valley Leisure Centre.
As well as excelling at swimming, Anna also plays basketball with the local Letterkenny Blaze team while she also enjoys taking part in yoga classes with the Donegal Down Syndrome Association.
Her mother said she was proud of her daughter’s achievements.
“All of her family are very proud of her. She has to do a lot of travelling but it’s worth it. This was her first time away abroad as part of a team and she really enjoyed the experience,” she said.
Because of her ongoing successes Anna is part of the Irish Development squad which involves travelling to Dublin once a month for training.
Last May, Anna won gold at the Northern Ireland Disability Games in Newry – winning both the 25 metre freestyle and butterfly swimming events, to add to the silver she secured in the 50m freestyle.
“She hopes to take part in the Northern Ireland Disability Games in June but she’s unable to go to the Worlds in Canada this July as those races are in a 50 metre pool and Anna would be more of a sprinter and wouldn’t have the necessary endurance built up at this stage – maybe next year,” Mrs Hennessy said.
Anna didn’t get too much time to enjoy her latest success as she had to sit an exam on her return to school on Monday morning.
“She’s doing the Leaving Cert Applied and had an exam first thing Monday morning. She didn’t get home until late on the Sunday night. She’s tired but very happy,” Mrs Hennessy said.